Take a deep breath: Artist Rajshree Nayak’s works symbolically try to remind women of their innate, latent energies, which are akin to the Indian Goddesses.

The Emerging Palettes is an annual event organised by Shrishti Art Gallery, about which the director Lakshmi Nambiar says, “The younger generation of artists imbibe a fresh outlook and novel thought process that enthrals. Emerging Palettes, show has been dedicated to these younger lots from last nine years. The selected artists are from different parts of the country, this year we had two artists from Hyderabad.”

Rajshree Nayak and Gous Pasha both accomplished their studies in fine arts from JNAFAU College of Fine Arts. The mention of natural elements can be found in both the artists’ works though in completely different style and diction.

Pasha’s works revolve around the innate and supernatural connection of the tribal people with their surroundings. He tells more, “I belong to the Amrabad, Mannanur region, and so my works prominently speak about the tribal people I have seen throughout my childhood days. I love the way they believe that the natural elements are like an extension of their entities.” And thus the wooden sculpture on display in the show refers to such amalgamation in abstract, minimalistic and symbolic manner. The natural base of the concave work assimilates a head of a tribal man as well as a leaf, in a beautiful- metaphorical version. 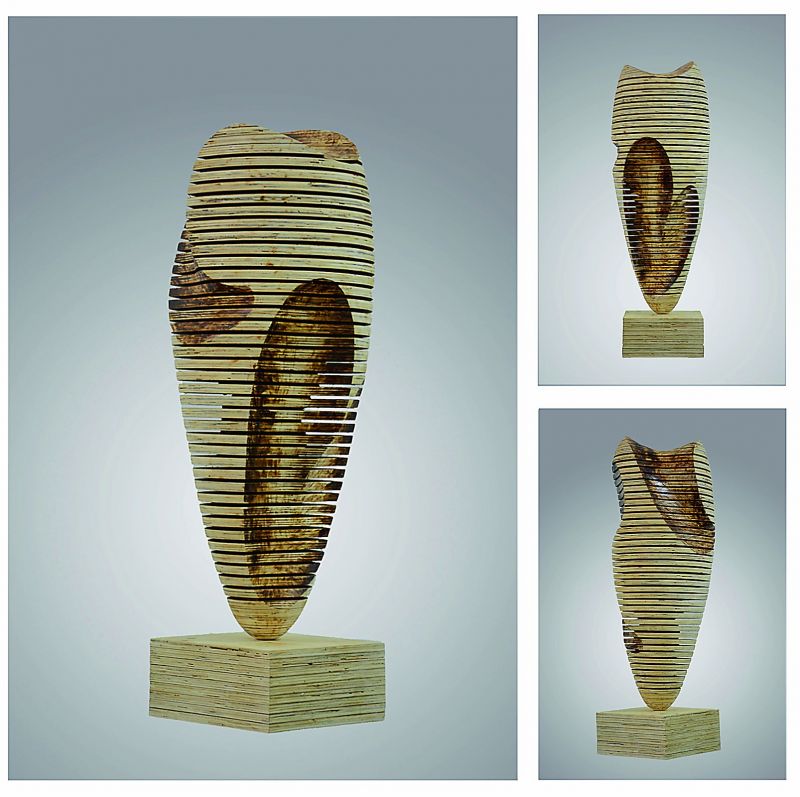 Inspired: Artist Gous Pasha’s wooden sculpture successfully assimilates a head of a tribal man as well as a leaf, in a beautiful-metaphorical version.

On the other hand, the similitude and bond between natural elements and women gets manifested in the etching prints by Rajshree. She weaves an interesting, figurative allegory with frequent mention of female forms. The mention of surrealist and dreamy references enlivens the intensity of her dialogue. She portrays women in all their unrestricted, unveiled charisma, existing peacefully amidst nature. The artist explains about one of the works on display titled, 'Take a deep breath, “Some of my works symbolically remind women of their innate, latent energies, which are akin to the Indian Goddesses. This work reinstates the moment when she decides to shed off the burden of inhibitions and embraces life with open arms.”