‘How does one proceed with China’s determined bid to enter India? How does Beijing fulfill its mission?’ —

To this author, whatever be the long-term consequences and outcome therefrom, the Chinese bullying and ‘forward thinking’ will keep India under permanent pressure, which willultimately do more harm to India and help China in a big way.

The book’s title says it all: China is inside India, a malefic presence that has penetrated the country and seeks to destroy it from within. The author, a former customs official turned foreign policy analyst, believes the Chinese leadership will not rest until it has finished off India, either by breaking it into pieces or rendering it inconsequential in the Asian scheme of things.

The sad part, according to him, is the role of a set of Indians who have conspired with the Chinese grand strategic aim of crippling India. This has happened before and is happening now. 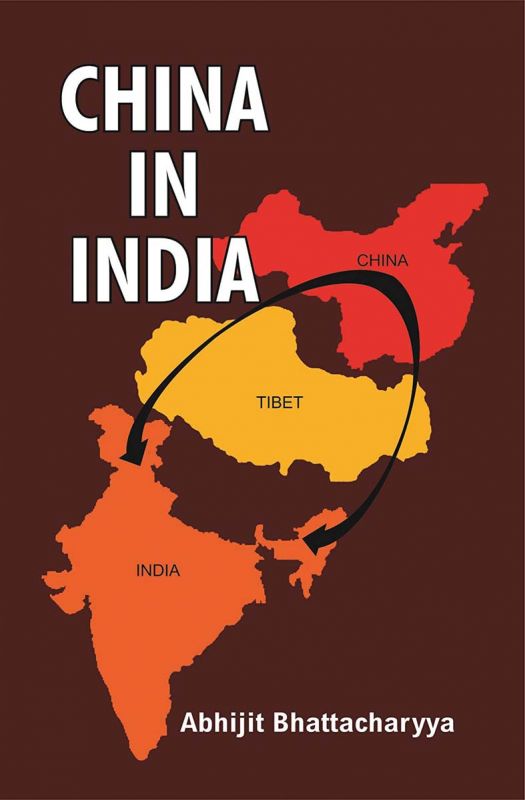 The author’s mindset appears to have been greatly affected by the Naxalite uprising in West Bengal and their slogan: “China’s chairman is our chairman”. He writes that he has “been a firsthand witness to, and the ‘victim’ of, Communist China’s deep penetration into West Bengal,” which began in the 1960s.

West Bengal, according to him was a “living laboratory of (a) political experiment” where “China got readymade foot soldiers in an alien land, fighting for them and espousing their unethical, illegal and aggressive cause, with dedication, devotion and determination even if it resulted in their (the Indian Hindu Bengalis’) decimation.”

The Chinese threat has not receded and the Chinese leadership still looks to Mao for guidance, the author argues. “Does not India know that the 21st century Chinese supremo Xi Jinping is the political “reincarnation” of Mao Zedong of the 20th century? ...who wholeheartedly has endorsed Mao, with the open backing of the sole ruling party of Beijing?”

The book progresses along similar alarmist lines. In the chapter on “One Belt: One Road”, he reiterates the continued existence of the “lurking danger from the Chinese side as Beijing, to this day, has not reconciled to India’s rise as an independent sovereign nation to stand up to the pulls, pressures and bullying of the Hans of mainland China. No doubt India (at its best) is hardly 30 per cent of China in every sphere of nation-building enterprise, yet India does exist where it was never to be seen before. And this is the real cause of the rabid anti-India action of Beijing.”

China’s economic rise too is viewed as a clear and present threat: “The Chinese seem to be in no mood to restrain their economic and commercial march over India. One rarely has seen such a helpless India before.” The Indian government’s decision to allow Chinese companies, including banks, to operate within India and open the floodgates to China imports is fraught with great risk, the author feels.

He points to the fact that India already has a $50 billion trade deficit with China. “This in the long run will harm India no end”, the author opines, “and there may come a time, and not too distant in the future, when India will regret the colossal loss caused due to industry, employment, macro-economic policy and planning, leading to possible internal turbulence, civil unrest and political chaos, resulting in unforeseen and unanticipated dislocation in society.”

“…India’s penchant for opening doors to contemporary China is akin to the way India was prised opened by foreign invaders in the 8th century through the sword and again through the sweet words of initial charm offensive of the Europeans in the 17th century, to ultimately surrendering to both, thereby losing both economics and sovereignty for hundreds of years.”

The author is equally pessimistic about the future: “How then does one proceed with China’s determined bid to enter India? How does Beijing fulfill its mission — “China in India”? To this author, whatever be the long-term consequences and outcome therefrom, Chinese bullying and ‘forward thinking’ will keep India under permanent pressure which ultimately will do more harm to India and ultimately help China in a big way.”

A major shortcoming of the book is its terrible editing. The book does not appear to have passed through the hands of a competent editor as a result of which its serious intent is greatly diluted. The wrong grammar in some places  and a certain amount of  repetitiveness should have been avoided.

The book is written in the style of the 19th century European pamphleteers who wanted to rouse their often disinterested public and phlegmatic Parliament. They took to writing highly provocative, often exaggerated accounts of real and imagined threats such as the Russian threat to British India, which ultimately triggered the “Great Game” in Central Asia.

The idea was to foment outrage against a particular country or domestic policy, thereby setting the agenda and influencing public debate. Mr Bhattacharyya appears to be set upon the same path. He is convinced that already it might be too late to save the country: “China already appears to have dug too deep to be uprooted. Yet India may still try. It may look to be a tad late in the day; but it is never too late for a nation of 1.25 billion heads to try to correct the mistakes of the past and the proposed misjudgements of the present.”

The writer is an independent commentator on political and security issues