‘Grief’s a reality of our lives’

Affable, honest and splendidly candid; author Amish Tripathi is a real treat to talk to. And, he certainly requires no introduction: His illustrious innings as an Indian author who has penned the fastest selling book series in the Indian Publishing Industry speaks for itself. On the first week of July, Amish marveled fans with yet another release— Raavan — Enemy Of Aryavarta. The book, which was written at a time Amish was battling a personal struggle, is one of the much-awaited reads of the year. In an exclusive chat with Bengaluru Chronicle, Amish gets talking…

Dressed in casuals, Amish walks in with a rather warm smile. Composed, and in the mood to talk. He’s probably happy with the city, one may assume. “I love coming back to Bengaluru because it’s so green. I’m not just saying that because my books sell in good numbers out here. I love South Indian food, especially the vegetarian fare,” he chuckles, adding, “I did my schooling in the South near Ooty. 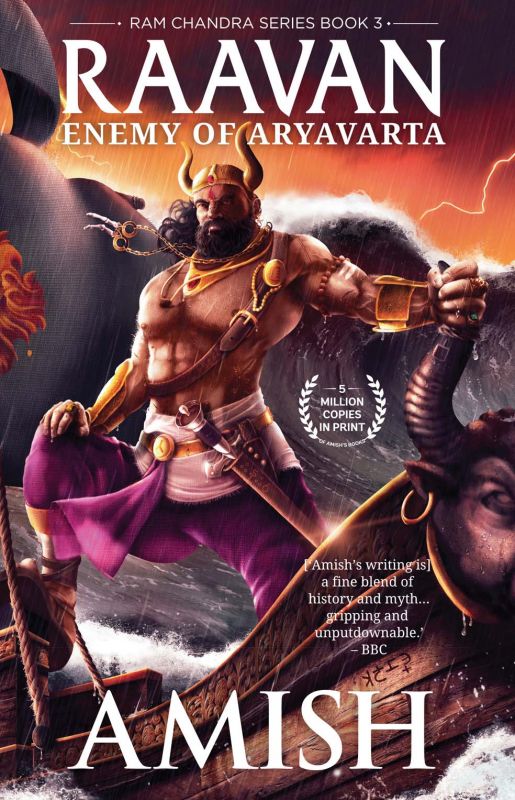 This is the longest gap that I’ve had between books. There was a time in the middle where it stopped but I got around it

Which is probably why I drink coffee more than tea. The only problem is the airport is too far! An hour and a half to reach the airport? Might as well be in another city then!”

“It’s dark”: Unsurprisingly, Raavan not only took a while to take shape and is pegged as one of Amish’s darkest reads of all time. “The character Raavan itself is dark. So, obviously, the book on such a character would be dark as well. I passed through various personal emotional upheavals in the past two tears, which happened to coincide with writing this narrative. So, yes, it’s a dark book.”  The book, which took a year and a half to materialise, is Amish’s only read which appears on stands after a gap. “This is the longest gap that I’ve had between books. There was a time in the middle where it stopped, but I got around to,” he smilingly states.

‘Grief is our reality’: Speaking about the way to see Raavan, He is a character who clearly suffers a lot. One of the wisest thing Gautham Buddha told us is that grief is a reality of our lives. No one escapes it. And, Raavan’s reaction to his sufferings were anger, hatred and things which made it only worse for him.  If he were an ordinary man, his anger wouldn’t matter. Raavan was so capable that his anger impacted the world. It wasn’t unrelenting anger. It was honour, determination.”

But, he’s got a takeaway from writing this book: “If your reaction to stuff hat happens is negative,  you make it worse for yourself only. So, the biggest lesson from this book is to learn what not to do!” He laughs. He’s mostly a non-fiction writer and believes in being practical. “Reading is like buying ingredients for your career as a writer. For every page I write, I read at least 100 pages.”

‘Marketing makes me nervous’: For most people, living up to expectations can be a struggle. But, Amish doesn’t care at all— at least while he’s cooped up in a room, writing. it’s only the next process that riles him up “I’m happy with my close friends. I’m not the most social person around. During book launches, one has to be. What others think of me, doesn’t impact me at all while writing. But while marketing, it does. It makes me nervous because I want my publishers to be happy, they have invested a lot of money. If the book flops publishers will cancel their contract, so it does give me the jitters.”

‘I’m happy that the book is over’: “My readers are used to tragedy and wars, but they aren’t unrelenting dark book from me. So, at one point, I was wondering how they’d react to it. The book can kind of sync in, but it’s been a whirlwind.”