With plans for turning into a VFX specialist in films and getting a master’s degree in VFX and costume designing in the US, Akhil’s now got his eyes set on Indonesia.

When 20-year-old Akhil Mancharla began fabricating his Daedric armour — from the popular video game The Elder Scrolls V: Skyrim — last year, little did he know that it would not just be one of his most detailed fabrications, but would also win him a national-level cosplay competition.

His exquisitely crafted armour won him the Fan Favourite Award at the Indian Championship of Cosplay that was held in Delhi on Sunday, organised by Comic Con India, and he will now be travelling to Indonesia in a few months to represent the country internationally. And what makes the win even more satisfying for him, is the fact that it was his first attempt at cosplaying.

Akhil says, “Winning with my first costume, travelling to Delhi and making new friends... it’s great. I’m an introvert and I don’t talk to people much. But at Comic Con (Hyderabad), everything changed — I made many friends, I’d get to talk about things I like.” 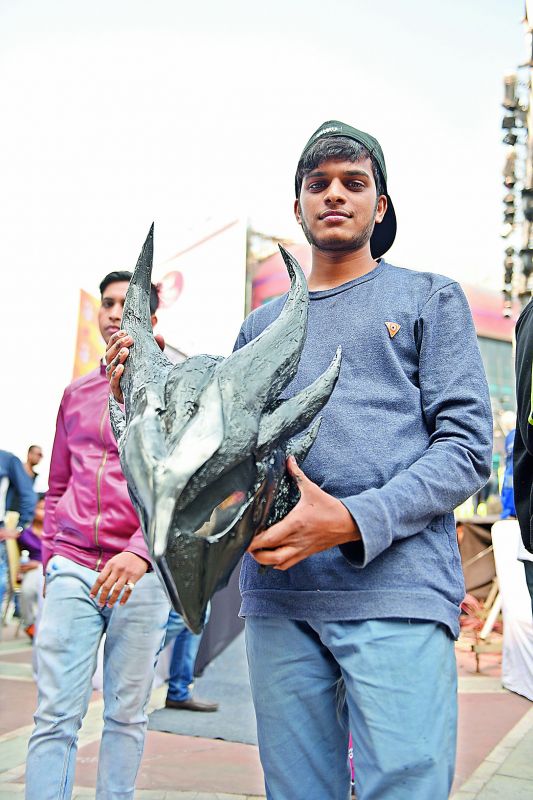 Picking up art since he was in school through painting and sketching (and winning a NASA organised contest in class 8 as well), Akhil began studying visual effects at his undergraduate college. “I also wanted to pursue my craftsmanship, so I started building helmets and swords. I learned from professionals and from the internet,” he says.

Akhil took about five months to create the Daedric armour that first won him the contest at Comic Con in Hyderabad in 2016, and then at the Indian Games Expo last November.

“My parents asked me to get a job instead of wasting my time. They didn’t talk to me for a month, and I’d spend at least 12-15 hours a day working on it. But after they saw the results, they’re happy,” Akhil says, adding that he used fibreglass, industrial resin and a body filler to create the armour, with an extra attention to detail: “I wanted to make it as screen accurate as possible, and I spent more than two and a half months in the detailing of the costume.”

With plans for turning into a VFX specialist in films and getting a master’s degree in VFX and costume designing in the US, Akhil’s now got his eyes set on Indonesia.

He says, “I want to upgrade my armour with lights and a shield. If I get another three-four months, I have plans for another cosplay too!”