The ongoing solo show titled, Inner strength, unveils the artist’s ability to combine varied visual elements and ideas into a single form of expression. Sculpture is the preferred medium by

M. Srinivas Rao. His comradeship with the medium is unfaltering and started at a very young age, about which he says, “After finishing my intermediate studies I accomplished my four years diploma course in traditional sculpture and architecture from SVITSA College in Tirupati. After that I pursued graduate studies in sculpture from P. S. Telugu University and post graduation from Central University, Hyderabad. I also worked in close association with senior sculptors after my art education to absorb some very important intricacies about the art form from them.” 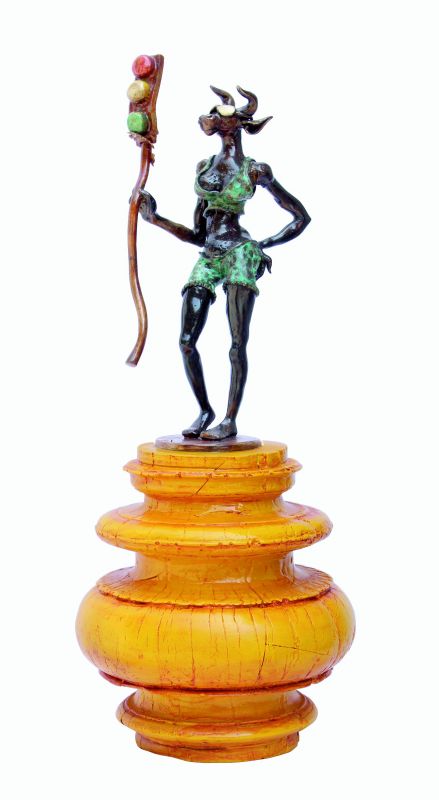 The series of works on display reinstate the artist’s connection and study of traditional Indian sculpture as well as a marked personal connotation which is very contemporary and modern. He freely includes varied media in his sculptures which enhances their physical attributes as well as conceptual strengths. His stylisation is marked with an obvious streak of playfulness and a charged, animated stance. Interestingly, a couple of works based on motorbikes merge the form of the modern machine with animal bodies. One such work is adorned with a pair of widely spread out wings and another one has the rear body akin to that of a Lion. Another, noteworthy sculpture rendered in bronze and fibre is titled, Thought control. The protagonist installed on a high, layered pedestal has the body of a woman and the face of an animal. On her right hand she holds the traffic signal post which manifests and symbolises the difficult process of controlling the flow of thoughts in a human mind. And also the fact that everyone is
expected to follow the conventional grid and pattern in the human society. Inclusion of varied materials and the iridescently hued colour palette, altogether accelerate the vivacious aspects of his expression.

Completely dedicated to the sculpture genre of expression, Srinivas plans to keep experimenting and working on it for his forthcoming shows. Seeing his passion for the medium it becomes necessary to ask him about the very first inspiration that initiated his journey as a sculptor, to which he fondly reminisces, “I belong to a family where agriculture is the main occupation, during weekends I used to assist my father in his farm work. After helping him I used to make toys like tractor, bullock carts, human figures etc. from farm mud. That was my first rendezvous with the blissful art of sculpting.”