The world on his palette

Organised by India Fine Art, the array of painting showcased Surya Prakash’s best works right from the 1960s to his most recent landscapes of 2018. Surya Prakash’s retrospective gave an insight into how the work of the artist has shifted paradigms in the last six decades.

Speaking to Deccan Chronicle, the artist reminisces how art was never the plan, as a career option. “I wasn’t the brightest student academically. And the most dreaded subject had to be mathematics. The basics until 10th grade were doable, but when it came to intermediate level, I struggled quite a bit. I passed my mathematics examination by a negligible margin and had to even copy a sum or two from a classmate. So eventually, due to my poor marks I did not get admission anywhere. It was then, that an uncle pulled me to the Fine Arts College in Baroda and got me enrolled. I had no idea what I was supposed to do at art school. That’s how my art journey started. I just got enrolled. And to be very honest I did not enjoy it much, the theoretical parts especially in the first one year. But there was one professor who pushed me to work harder and inspired me relentlessly, Vidya Bhushan.”

He continues, “Eventually after I finished my course, there was a job offer in Hyderabad which was a gazetted post and in those days I got paid `210. I worked there for only three years, but those three years taught me a lot. I worked very hard, to a point where I would sleep, eat and work in the same studio. But I always wanted to go to Delhi to understand the art trends there. Mujhe dekhna tha ki yeh life kya hai Delhi mein? (I wanted to see what the hype was about Delhi?) So I saved money, got a financial grant from Lalith Kala Akademi and moved to Delhi for six months with artist Ramkumar. As a young artist going to Delhi was big first step and a great opening.” 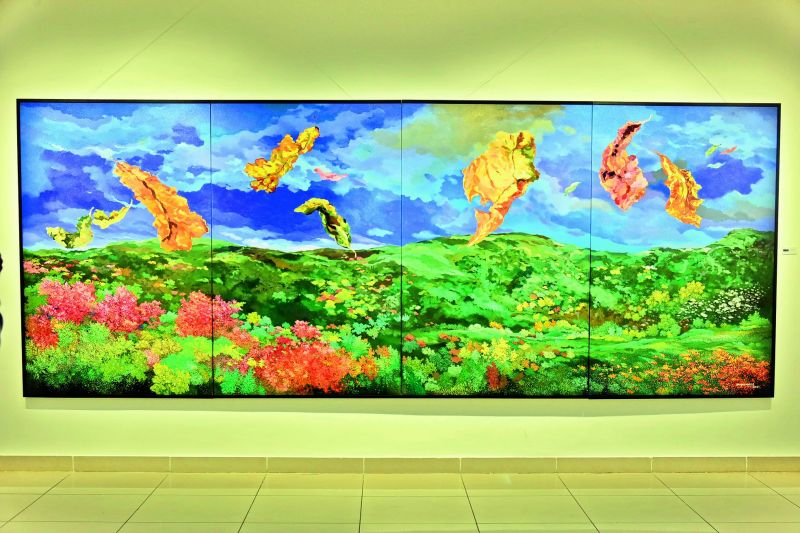 Floating: A four-canvas piece from the artist’s series, Flight, inspired by leaves

Surya Prakash’s initial works from the 1960s have reflected his love for Abstract Expressionism. With muted colour palettes and an abstract approach to landscapes, Prakash discovered what would be his primary muse in his art journey — nature. Most of his work — be it his series Flight, Reflection or recent landscapes — have heavy traces of his muse.

‘Art is personal to me’

Surya Prakash said that he makes art for himself with his personal experience, which may not connect with the viewer. Citing an example from his very celebrated series, Reflection, he says, “This series was inspired by the reflections that I had noticed on water surfaces. But when I painted it, it was a fairly abstract piece.

Now you may not recognise or interpret it as reflections on the surface of a water body, but it is my experience. Art is personal to me.” 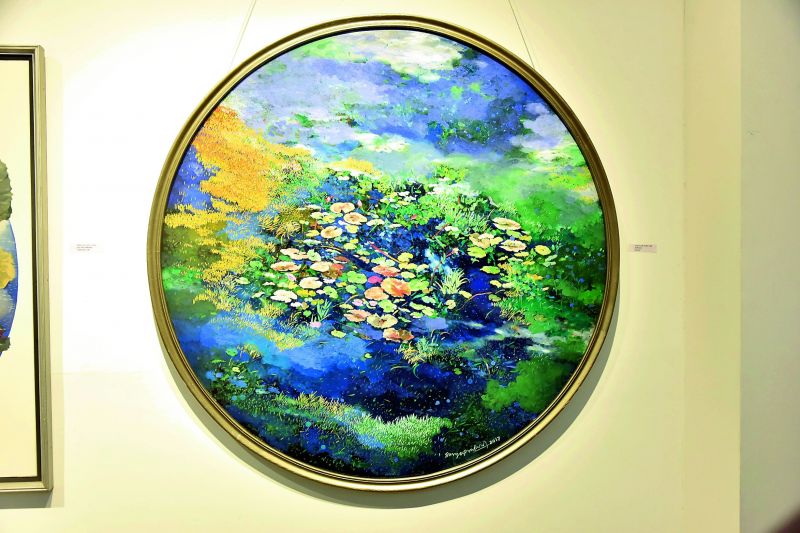 A floral inspiration:The lotus and it’s leaves have been a reccuring element in most Surya Prakash’s water based landscapes. This circular canvas was inspired by a pond that the artist constructed at home to study the flora and fauna.

“The entire series is inspired by dry, dead leaves that fall off from the trees during harsh summer months. I collected these leaves and worked on them for months together. But again, there is a sense of abstractionism in this. If you notice, there are no tree trunks or branches that the leaves are falling off from. They just seem to be floating.”

But one cannot stop but notice how Surya Prakash’s work has changed over the years. From the 1960s, with his bold strokes and a subtler colour palette, to the last decade or so, with finer detailing and a much more warm and vibrant colour scheme. The artist reveals how he shifted from oil paints to acrylic colours.

A traditionalist when it comes to selecting his mediums, he says, “I am not too experimental when it comes to mediums. I have always used oil paints and love its soft strokes. But in the last decade or so, I saw my contemporaries using acrylic. So I decided to give it a shot. But I struggled for almost four-five days before I could get the basic hang of it. I used to keep a canvas on the floor and then pour and splatter the acrylic paint to see how it takes shape on its own. It was then, after struggling for  days, I picked up a brush and started dotting the paint across the canvas. That is how I have come up with the detailing technique that one can see in my recent landscape work.”

The retrospective exhibition saw in attendance not only the who’s and who of the city, artists, and art enthusiasts but also also art patrons from New Delhi and Mumbai. But when it comes to patronage by the city’s art enthusiasts, Surya Prakash agrees that there is a dearth of it.

“There is definitely a lack of patronage in the city, but that is not because of the lack of money. There is more than enough money in circulation in Hyderabad. But people have different priorities here as compared to New Delhi or Mumbai. Here, one would rather buy a sparkling new luxury car than invest in a great art piece. So that cultural revolution is much needed. But we cannot just blame the possible patrons. The artists and gallery owners will also have to pro-actively participate in this process of cultural awareness by constantly hosting such exhibitions, talks and art camps,” Surya Prakash concludes.