Jangah Singh Shyam: A Conjuror’s Archive, by eminent scholar of Indian art and visual culture Jyotindra Jain, tells the story of an incredibly talented and innovative artist, Jangarh Singh Shyam. A well-known Gond painter,  Jangarh, in a productive 20-year career span (1982/3-2001), rose from being an unknown “tribal” artist to an internationally recognised one. It sadly came to an abrupt halt when he committed suicide in Japan.

Jangarh is most often linked to the Gond school of painting known for its distinctive use of primary colours, secular themes and a line patterning to fill the drawing. But as Jain explains, technically, Jangarh belongs to the Pardhan community who were the bards and travelling minstrels among the Gonds.

Jangarh was “discovered” by J. Swaminathan while the latter was at Bharat Bhavan in Bhopal where he preferred to focus on the “art” content of the works as distinct from the “ethnographic” one.

Jangarh was a shy 19-year-old when he first met Swaminathan. At the time his drawing style comprised simple lines and bold colours. Most often the paintings were made on plain white paper. But over time, living in an urban milieu and experimenting with new mediums like poster colours and Rotring pens for his fine ink drawings, Jangarh began to evolve. And in this evolution of his art and his confident visual expression began a tussle not just with contemporary Indian artists but also with the art market. The dominant feeling was that Jangarh should remain “tribal” in his art. But this is precisely where the individualistic stylistic idiom of Jangarh developed. For instance, while employed at Bharat Bhavan as an attendant in its graphic studio, Jangarh learnt screen painting and evolved a unique style by experimenting with the process of printing by making “multiple impressions, textures, stencilling, splashing inks and scraping, and scratching the silkscreen itself”. He also adapted the beaded borders of clay
art relief done in village homes to minute opaque or hollow dots or circles into surface patterning of his paintings effectively, reflecting principles of chiaroscuro and perspective. His fine ink drawings are incredible for their shift from using bright colours to playing with black and white. 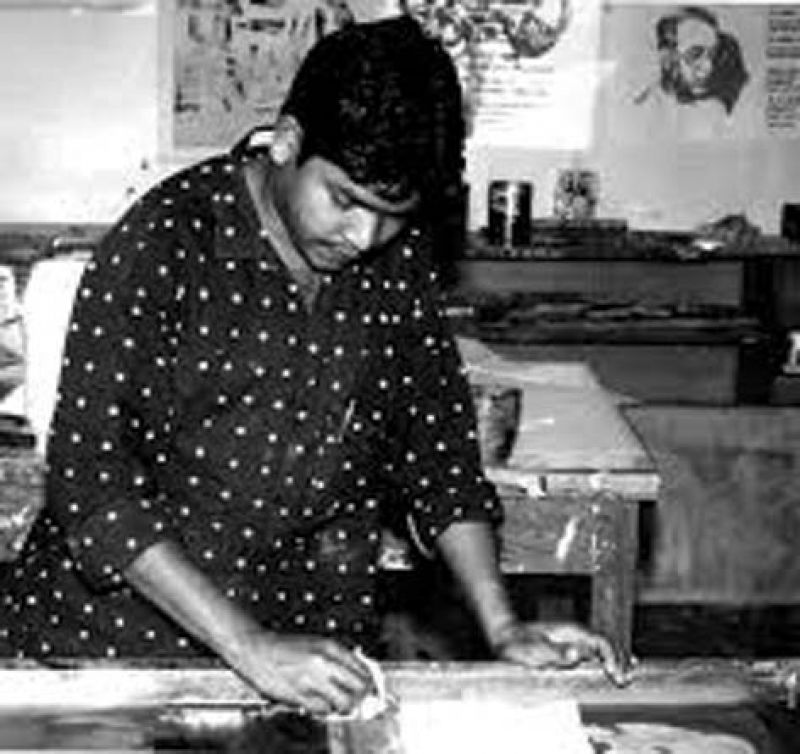 Jangarh in his studio.

Jangarh’s valuable artwork is known not only for his distinctive self-expression, the intricate detail in every painting (irrespective of its dimension whether it is a mural or a painting), but also for the merging of the secular and sacred for the first time in the history of Gond art. Though a Pardhan, Jangarh never performed as a minstrel himself. Yet music was in his blood. He was familiar with stories about their deities so was able to attribute a physical form to the gods after seeing villagers in a shamanic trance—Jangarh drew inspiration from their expressions at that particular moment.

Jangah Singh Shyam: A Conjuror’s Archive recounts the rise of Jangarh as an artist against all odds particularly in the face of hostility by contemporary artists, much of which Dr Jain witnessed. Particularly heart-breaking are references to the economic exploitation of the soft-spoken artist by the art world. The bulk of this book is devoted to a curated selection of Jangarh’s art arranged chronologically accompanied by an in-depth analysis by Jain. It is fascinating as in most of the paintings Jangarh gives the folk stories he heard in his village a visual expression with the rare exception of a self-portrait, placed in a village scene rather than any of the urban settings he was now more familiar with. As Jain says, “He evolved a highly expressive, individualistic, aesthetic idiom, which resulted from the extraordinary trajectory of his life … The visual vocabulary that he originated and continuously improvised on was his own in the sense that there was no precedent for it in his community’s collective vis
ual tradition….”

Sadly, while on a three-month stay in Japan, for still little understood reasons, Jangarh took his life. He was 40. His last letter sent to his wife reached her in India days after his death. In it he advises her on managing the household well but a substantial portion of the missive is devoted to figuring out how to get him back home as the director of the museum where he was residing had extended his stay. One of the people he appeals to is Jain – “talk to Jainsahab that he should talk to the director to send me back, this is the only request… rest is fine.” [The letter is reproduced in this book with due permission.] As Jain writes “To this day, the episode continues to haunt me and this is what gave the impulse for writing this book as a tribute to him.”

There are innumerable books published on Jangarh but Jangah Singh Shyam seems like the definitive account on an extraordinarily talented artist written poignantly by an art historian who was fortunate enough to witness firsthand Jangarh’s meteoric rise.

The writer is an independent international publishing consultant and columnist based in New Delhi.