Charity begins at home, and honesty, with ourselves. As a society, we dig into the cocoon which exempts us from being honest but mandates everyone else to be righteous. Written by Nikolai Gogol and adapted by Sai Pranjpye, the play Jee Huzoor is relatable even today, especially now when the government is trying to fight corruption.

Directed by Subhash Gupta and produced by Kissago, the play is set in the eighties. Jagdambaprasad, a corrupt collector of Tikamganj, played by Subhash himself, is sitting on needles since learning that an inspector from Delhi is coming to his district to audit. The district’s entire machinery has crumbled under his corrupt practices where he has appointed an illiterate as the school headmaster, a veterinarian as head of the government hospital and a clerk as the judge. He has called an emergency meeting to ask them to get their affairs in order to impress the auditor. In the mayhem he somehow mistakes a freeloading brat Keval, played by Abhijeet, as the auditor who was living in the local hotel. The entire district descends on Keval to please him. Even the collector’s own corrupt brigade pays Keval bribes to remove Jagdamabprasad, as his corrupt practices were hindering their own. Keval revels in the all the attention and pockets all the money, even though he is just a common man. It is too late by the time the circus realises that they were jumping through hoops for the wrong audience. 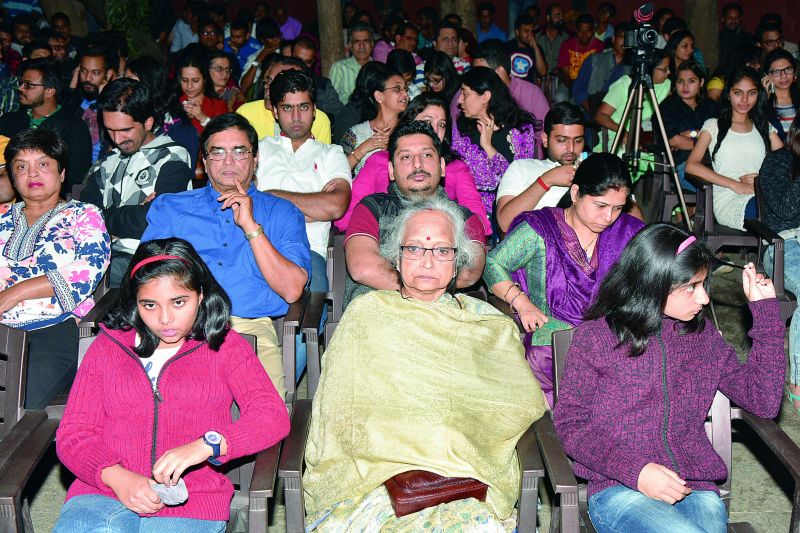 Several people turned up to watch the play

The play is a laughter mayhem from the get go. The actors lived up to the writing especially Subhash and Abhijeet, who kept the comic momentum going even when it dropped. Prerna from the audience said, “Not only was the play so much fun to watch, but it also made me introspect. I realised that the only reason someone is not corrupt because he never gets a chance.”

Supporting characters like Chatuk and Batuk, played by Nikhil and Gaurav, embody sycophancy which we see so often with disgust amongst our political class. Every aspect of this century old story feels so contemporary that one begins to wonder that will we ever improve in our ways? While you chew on that philosophical question of the day, you might want to keep an out for the next show. Whether you get your answer or not, it is definite that you will overdose on laughter.