The Kimbell Art Museum’s original building, designed by Louis I Kahn, has become a mecca of modern architecturein which 'light is the theme'. (Photo: Amit Khanna)

On a cold wintry morning in Dallas, I went to see one of my heroes. As a student of architecture in India, I revered Louis I Kahn’s work and no building embodied his skill better than what my nieces affectionately call “The Hotdog Museum”. Now, even as a practicing architect, The Kimbell Art Museum is still one of my all‐time favorite buildings and my visit helped renew my faith in Kahn as one of the last century’s greatest architects.

Across the road, Tadao Ando has built a very different kind of museum, the Modern Art Museum. It’s only when you experience the two of the together that you realise the subtle ways in which Ando has paid homage to the older building while creating spaces generous enough for “modern” art, not always a simple thing to achieve.

As one ascends the hill over Camp Bowie, two long grey walls come into view. The first, unrelenting concrete, burnished by age, betrays its mid‐century age. The second, crisp and metallic, seems more recent, albeit a little flat. The walls slowly reveal another, more delicate material.

The concrete gives way to a mild unfilled white travertine and the metal unwraps to reveal cool blue glass. Both also have ledges that hide the roof form, almost like classical cornices that cap the horizontal nature of these buildings. Large pieces of public art occupy the grassy edges to the buildings. 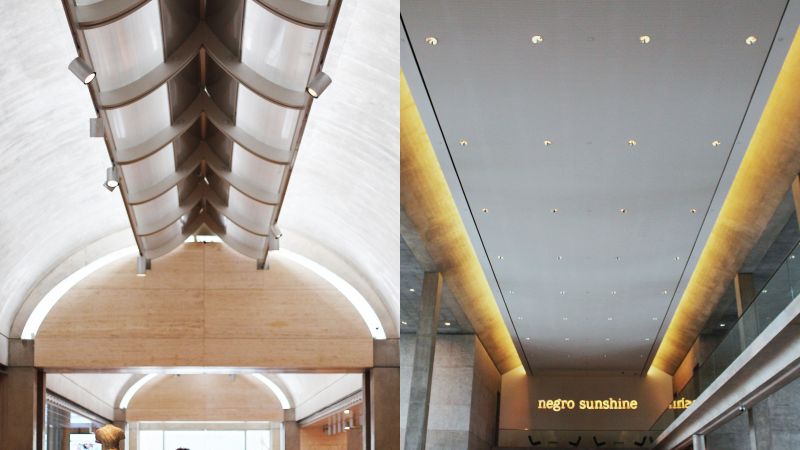 The elegant ceiling aesthetics of Kahn (left) and Ando at the Kimbell Art Museum and Modern Art Museum at Fort Worth respectively. (Photo: Amit Khanna)

The entrance lobby areas are both organised as linear rectangular spaces. Despite the abundance of dull grey concrete, the luminosity of the spaces is maintained by the dramatic light sources, but in very different ways in either building. There are two main floors in both buildings with the art collections mainly on the upper floor with the lower floors carrying ancillary functions.

Ascending and descending are powerful architectural tools and both architects employ them to create dramatic vistas. Kahn prefers to let the light in from above, letting the time of the day and year dictate the user experience. Ando, on the other hand, prefers to bring in the light from the sides, saving the roof for a dramatic white plane that controls the light quality of the space.

Sometime in the early 1960’s, Richard Brown was appointed Director of the Kimbell Foundation. He was charged with creating a programme for a new museum and choosing an architect. On his first meeting with Kahn, the architect famously asked him to stop concealing the cast on his foot (skiing accident), suggesting that being honest about the reality of the situation. As with the cast, Kahn was brutally honest about the way his buildings were made, revealing intimate details of how they were put together and raised from the ground. 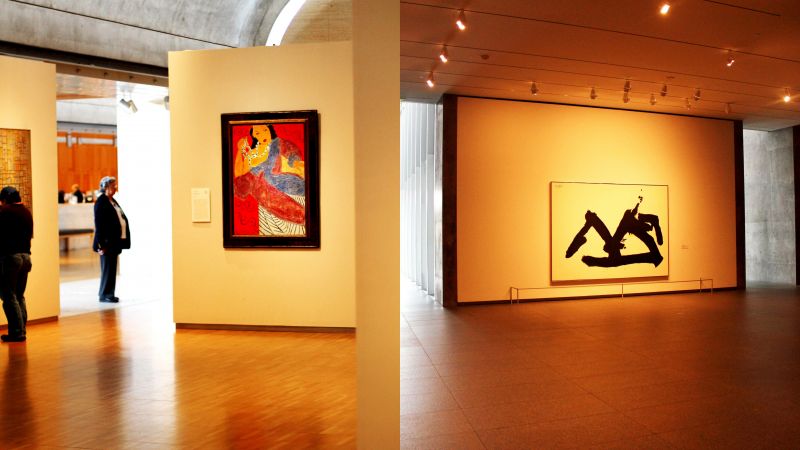 Art on display at the Kimbell (left) and the Modern museums, with both the museums catering to artworks with different spatial needs. (Photo: Amit Khanna)

The concrete may have its imperfections, as do the travertine blocks, but they are part of the intended aesthetic. Ando, on the other hand, has a very precise approach to concrete, eliminating all imperfections to the point where the concrete seems to be prefabricated blocks – more factory aesthetic that in-situ.

The art in both museums have different needs of space. The Kimbell has classical framed pieces and sculptures that are served well by its domestic sized spaces. The art in the Modern, on the other hand, seems to be made specially to fit in the cavernous volumes that make up the building.

In the larger gallery spaces, the similarity between the two museums is almost uncanny. The oak wood floors, large white planes of white background for colourful art and most importantly, the diffused daylight from the unseen slots in the roof. 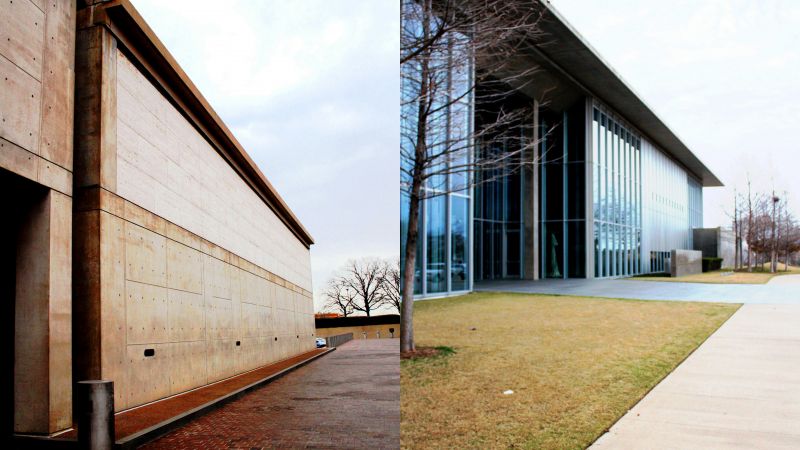 The unrelenting concrete walls of the Kimbell museum burnished by age are a complete contrast to the crisp and metallic, more recent walls of the Modern museum at Forth Worth. (Photo: Amit Khanna)

The skylights above the main staircases are dramatic but the Modern seems to achieve it with an absolute simplicity of materials. It makes one wonder whether Kahn would have designed differently if he had access to modern glass technology. Texas can get quite hot in the summers and both architects seem to have been quite conscious of the glare from the roof skylights and daylight in general. Kahn’s elaborate light diffuser is part of the architecture of the interior spaces, forming a focal point in the unrelenting burnished grey concrete vaults.

The diffuser also acts as the track for the supplemental lighting for the museum, so the light quality is almost consistent, irrespective of the weather outside, important for the delicate artwork. In the Modern, many of the gallery spaces are lit only by artificial lighting, while the walkways on the periphery get the advantage of natural lighting. In many ways, Ando seems to be constrained by the requirements of preserving art, something that Kahn did not possibly have to contend with, allowing him to achieve more elegant circulation within the museum.

The Modern provides dramatic, screened vistas from the upper floors, elegantly framed by the exterior supports of the massive roof. The Kimbell looks inwards, save for a few small courtyards that are almost residential in their scale. The Modern reveals its true exterior from within the courtyard, a shallow reflecting pool that emphasises the simple projecting roofs. The Kimbell’s repeating roof form are a little less heroic, more concerned with regulating interior light.

In the end, these photographs are not meant to compare the two architects and decide who is better, only to look at how two great architects create simple, monumental space using concrete and light.

*Disclaimer: This article has been contributed by Amit Khanna, Design Principal, AKDA. The facts and opinions appearing in the article do not reflect the views of Deccan Chronicle and Deccan Chronicle does not assume any responsibility or liability for the same.

An engaging tale of Parsis in India