Book review: Pick it up for the romance of hand-drawn maps

The Survey of India paper maps have successors — the sketch-maps, and then maps drawn to scale.

This is one of the nicest books I’ve handled in recent times: hard leather binding with golden-lettered spine; thick, glossy, sepia-finished pages and content that makes it a treasure for lovers of mountains, mountaineering, maps, history and general-knowledge. The chapters and sketches/maps have been selected from the internationally respected The Himalayan Journal, which recently completed 90 years. They cover the Himalayan range from the East Karakoram, Karakoram, Uttarakhand, Nepal-Tibet to Sikkim-Arunachal Pradesh-Bhutan. The introduction mentions a “Mind Map” that evolved into a “Human Map” which is what we have been using until the satellites started giving us images of the planet. “Prayer Maps” and “Descriptive Maps” were of interest to adventurous enthusiasts.

The Survey of India paper maps have successors — the sketch-maps, and then maps drawn to scale. But the “white spaces on the maps” were what attracted explorers into un-trodden territory. Today, computers make maps virtually flawless but, says editor Harish Kapadia, “the romance of the hand-drawn maps is missing”. The text is easy on the eye and the pages full of illustrations (hand-drawn as well as photographs) that make one halt and ponder at almost every page. The photographs of the authors are displayed in collages; kudos to the designer, the pages bring alive the spirit of history and vivid prose in the most interesting way. The writer-mountaineers include John Hunt, Trevor Braham, Giotto Dainelli, Reinhold Messner, H.R.A. Streather, Riccardo Cassin, Anthony Saunders, J.O.M. Roberts, Robert Pettigrew, A.J.M. Smyth, H.W. Tilman, W.H. Murray, A.V. Saunders, Andre Roch, Martin Moran, Chris Bonington among others. 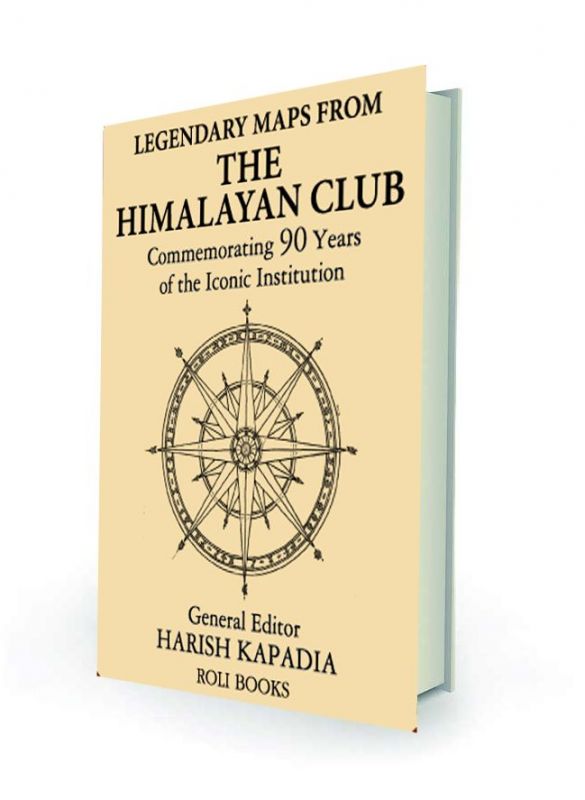 Some quotes that tempted me to re-read the preceding paragraphs:  “.. His eyes I still see today as then. I do not know why he also took off his spectacles… That evening I did not yet know that these gloves would be the only proof of our ascent.”  “‘Do you want to bivvi here?’ ‘It’s bloody cold.’ ‘There’s no wind. Best place in a storm.’ ‘Then let’s return when there’s a storm.’ The breathclouds measured the sentences. We would freeze here.”  “’His anchor’s gone!’ In that instant, we all knew it was true. That was no stonefall, those sparks were made by crampons.”

Those who have memories of cramped tents, biting cold, airless heights, surviving for days on biscuits and water to chase a dream and then the exhilaration of standing atop a peak, panting with hard effort, know that life can’t be the same after that. Those who don’t have such memories, have a chance of experiencing that thrill through books like this one. The ease by which one can, with an index finger, follow on the maps a thick line and then a thin one, then see the river beside and below it, imagine a gorge or a crevasse, share the discomfort of a night warily spent in a tent attacked by cruel winds, is equalled by the effort of the artist who drew the maps.

Gullies, cornices, knife-edge ridges, sharp peaks, inhospitable terrains, steep crests, cols and couloirs, precipitous slopes and treacherous glaciers give one an idea of the degree of difficulty in climbing in the Himalayan range. This is achieved by the shading, the dotted lines, the triangles, and the descriptions printed alongside. I compared the Gangotri Region (page 136) with earthview map site. I preferred the hand-drawn “picture”. The maps allow the imagination to soar, to “feel” the height through the talent of the artist and the words of the men who set foot on mountains far more challenging than the mighty Everest like the Nanda Devi, Bojohagur, Siniolchu, Sudarshan Parvat, Bandarpunch, Nilkanth. Complicated routes and comparative heights of peaks seem simpler to comprehend in these maps. We’ve forgotten what hand-written labels look like.

On page 187, the West Face of Ama Dablam is an example of the artist’s portrayal of an ice-cliff, an avalanche, a glacier, a stream and a river, and moraine in one single map.  At the end of the book, unexpectedly, there is a pleasant surprise. “The Mountain Story Through Stamps” is a worthy read, though it seems that it has been added as an afterthought. Kapadia is a prolific writer and an able editor. He edited The Himalayan Journal for many decades. His first book, Trek the Sahyadris, first published in 1977 and now ready to go into a sixth, revised edition, had hand-drawn maps that at least three generations of hikers from and around Mumbai-Pune grew up on.

His many books on treks and trails are detailed and often based on his own experiences, for he is a celebrated explorer, one of the very few in India. He has crossed more than 150 Himalayan passes and explored unknown valleys. He is the first Indian in 125 years to receive the Patron’s Medal from the Royal Geographical Society, the King Albert Mountain Award, the Tenzing Norgay National Adventure Award for Lifetime Achievement and what is considered the Oscar of mountaineering, the Piolets D’Or Asia Lifetime Achievement Award last November. This is a non-fiction compilation I would recommend to anyone who loves to read and own a good book.

Sheela Jaywant is a humour-columnist, prize-winning fiction writer and translator who is seriously in love with books. She lives in Goa and can
be contacted at sheelajaywant@yahoo.co.in.