Whose art is it anyway?

DECCAN CHRONICLE. | DEEPTHI SREENIVASAN
Published Nov 8, 2016, 12:00 am IST
Updated Nov 8, 2016, 6:52 am IST
A cyber war is on about the authenticity of the minimalistic posters depicting Kerala districts

‘Calligraphy’ is the art of producing decorative handwriting or lettering with a pen or brush. Over the past one week, this art has divided Malayali keyboard warriors and art enthusiasts and the two artists catapulted to online stardom are Ajay Ghosh, a mediaperson with a passion for art, and Sanesh M V, a professional artist. On November 1, the Kerala Piravi Day, a collage of artistic calligraphic posters on Kerala districts went viral. Malayalis marvelled at the minimalistic posters which had names of districts written in Malayalam incorporating a landmark from the place.  Soon the artist behind it was indentified as Ajay Ghosh. 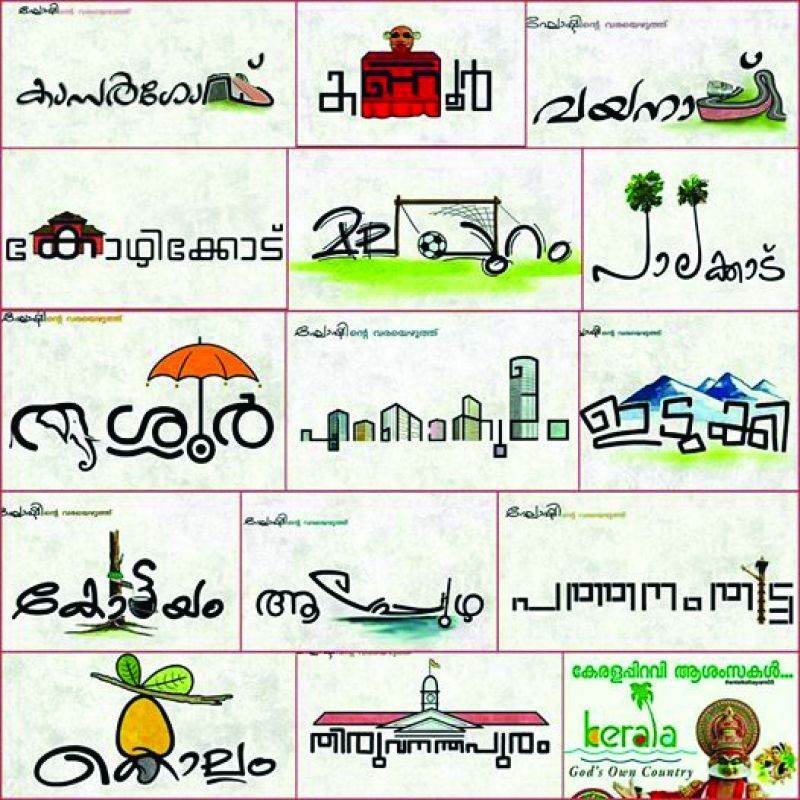 Ajay Ghosh’s calligraphy that went viral on November 1“It was a pastime for me, I had no idea that the works had become viral. I knew it through a friend when he called up to inform that director Renjith Shankar has shared it,” says Ajay, a programme assistant at Doordarshan.  “It was not created keeping in mind Kerala Piravi. It was started a month ago and by the time I finished all the districts, it was October 31. Someone took the initiative to make a collage out of it and shared it.” On his overnight fame, he says, “I now fully understand what social media is capable of.” 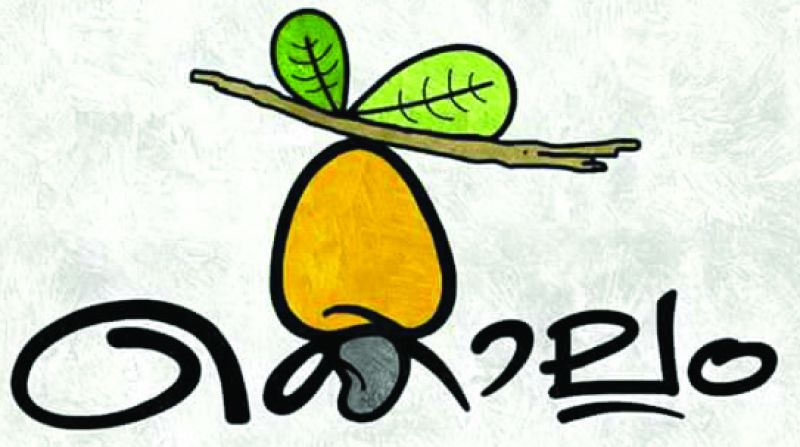 Ajay explains, “Calligraphy was not on my mind when I created it. For example, when we write ‘Palakkad’, in calligraphy, it is written artistically. What I have done is to bring a character of the place into the name. I think we could call this a variant of calligraphy. My first work was ‘Thrissur’. I felt the first letter ‘Tha’ looked like an elephant. Once that was done, I thought ‘why not the rest of the districts?’ 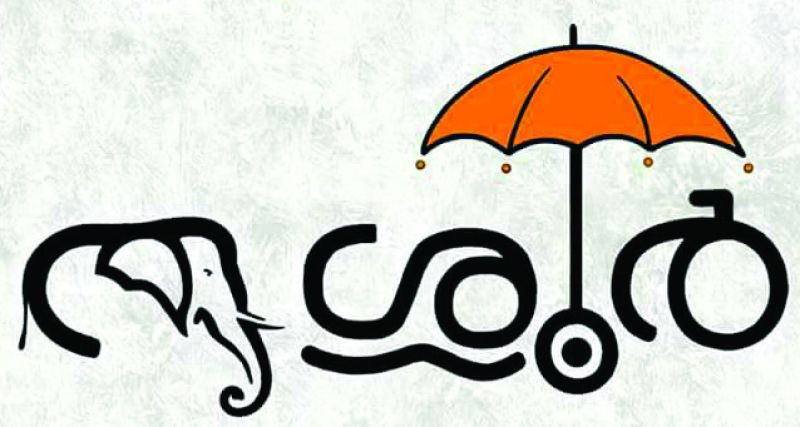 While Ajay’s calligraphy was getting shared, a few commented that they have seen this work before. What followed is a heated discussion with many claiming that the works were copied from the calligraphy of Sanesh MV, a creative designer at an advertising agency in Kozhikode. Soon, Sanesh was bombarded with messages and phone calls informing him about the ‘plagiarism’. His Facebook wall was covered with screenshots of his own works shared by his friends with the tag ‘Saneshinte Prathikaram’. 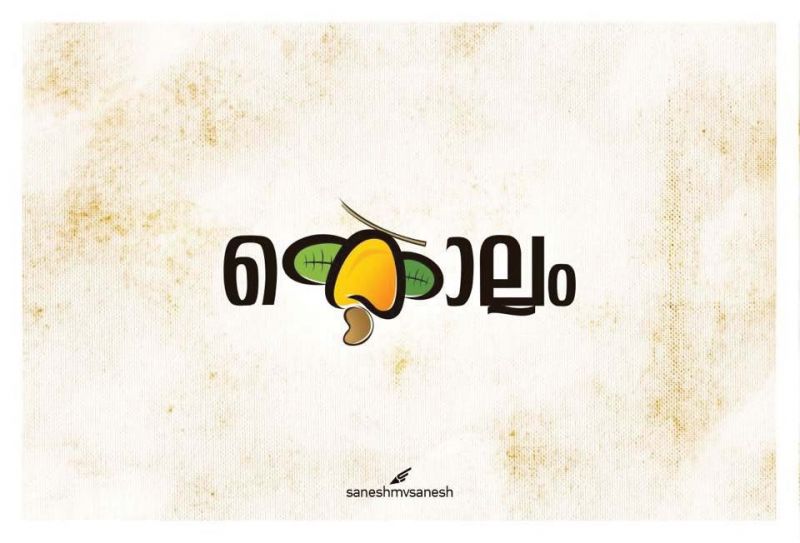 Few of Sanesh’s calligraphyAsked about the claims, Ajay says, “I’ve covered all 14 districts whereas has he worked on just nine. I have clarified already that my works on ‘Kollam’ and ‘Wayanad’ are similar to his. My acquaintance with Sanesh began after the online discussions. I have spoken to Sanesh as well. He does not find that my work was copied from his. In fact, I’ve never come across his works before. The similarity was quite accidental. I am actually looking forward to see the rest of his calligraphies and also hope to work with him.”

Sanesh’s love for calligraphy started from school. “I used to do such writing since school days when I used to make 3D handwritten names for friends. During college years, I used to engage in banner making and wall writing, from which I learnt the basics,” says Sanesh. “These works were done a year ago for a website. I wrote ‘Kannur’ incorporating the St Angelo’s Fort in it. This gave me the idea to work on the rest of the districts. Kasargode reminds us of the Fort and Kochi reminds us of the Chinese fishing nets, so with such ideas, I started working on those and covered nine districts. Recently, I did one more.” 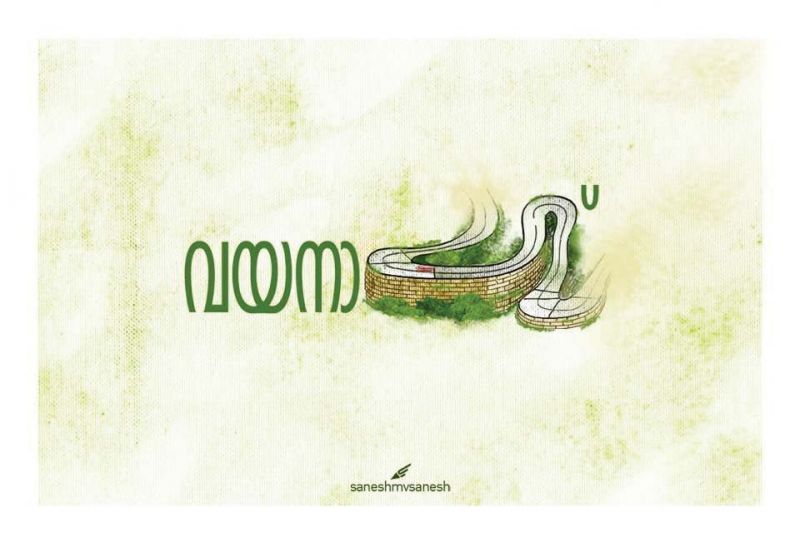 Asked about the similarities in the works of the  two, Sanesh points to a positive aspect and says, “A work of mine was once stolen. My friends pointed it out to me and what I felt was that ‘it was stolen maybe because it was good’. When Ajay Ghosh’s calligraphy came out, a friend of mine sent me the link. Yes, many of those looked like mine, such as ‘Kollam’... even the colour scheme was the same.  I’ve never seen anyone work on a theme like this before me.”

“Ajay did contact me and asked for forgiveness if any of his works looked similar to mine. But there’s nothing to be sorry. It’s just people talking. There is no place for anger here. But his claim that he hasn’t seen my work before is a little unbelievable. We have 23 mutual friends on Facebook and just a search for Malayalam calligraphy online leads to mine. And when it comes to working with him, I’d like to say a humble ‘no’ to it.”