Traditionally, we have believed that art imitates life. An artist reproduces on canvas what he or she sees. This simple concept is known as mimesis. Art is no longer just for art’s sake, but involves social engagement and political motives as well. Can it bring about a change in society? Yes, says artist Sindhu Divakaran. “We use images for a wide spectrum of purposes mainly because we have eyes to see. Humans must communicate with each other, express their thoughts and reactions. Yes, art has gone political. In the time of need, it has to be. We all have political stances and that would influence our art. My politics is to oppose when something malicious happens to society and stand up for the welfare of people. Sometimes, art moves from decorative to communicative and this is not a recent phenomenon.”

Known for her peculiar way of portraying issues, Sindhu’s palette has never run out of colours to talk. “I have done works that are realistic and representing ordinary matters and objects in the world. Being a strong, politically moved person who believes in the philosophy ‘art should bring the change’, I have been focusing more on societal happenings and tribulations over the past few years. I love to draw colourful, fantasy-like works, but how can I limit myself when the world is facing a problem and turn a blind eye towards it,” she asks. Children, women, and oppressed and marginalised people find space on Sindhu’s canvas. Her works are not abstract or realistic. She would like to call them figurative that are subjective, inspired by society. 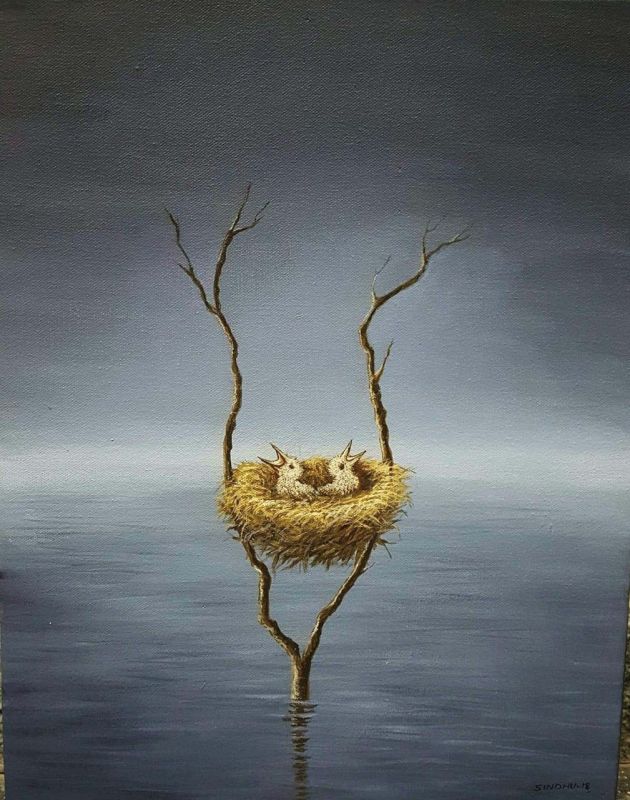 A State-award winning artist, Sindhu runs an art school in Angamali. She was part of a group exhibition held in Kochi recently and is gearing up for another exhibition that is based on the Cuban revolution.

When quizzed about what inspired her to concentrate on socially relevant works, she says, “As communicators and citizens, artists by necessity become a reflection of their times and their surroundings. I believe that any form of art can influence a society that is all ears. Our country has a great history with artists. Artistic freedom and how some artists are being crucified is another thing. So, when an institution or a person stands in front of your freedom or causes trouble, artists have to speak about it. We have space here, though artistic freedom is in danger in some parts of the country. Kerala still has that space. Art has never disappeared. Especially during times when others try to stifle expressions, the human mind fights to remain what it always has been. It fights to remain. Art fights to remain.”

She wishes to see a world where artistic freedom to express is complete with no shackles. “I also want to leave a mark through my works,” she wraps up.