Creativity in the hinterland

He received the Padma Bhushan (2005) and various other prestigious awards, including the Raja Ravi Verma Puruskar (2003) and the National Award for Painting (1973 and 1969). But artist A. Ramachandran does not like to rest on his laurels.

Infact, the student of Kala Bhavan in Santiniketan, who is showcasing his sculptures and drawings from 1964  to 2016, all this month at National Gallery of Modern Art in Bengaluru states, “Awards do not raise an artist’s worth or make him good or bad. Although, they might help in public recognition, they have never changed me as a person. I have never used them to my credit. I’ve won many honours, but I live the life of a common man.” 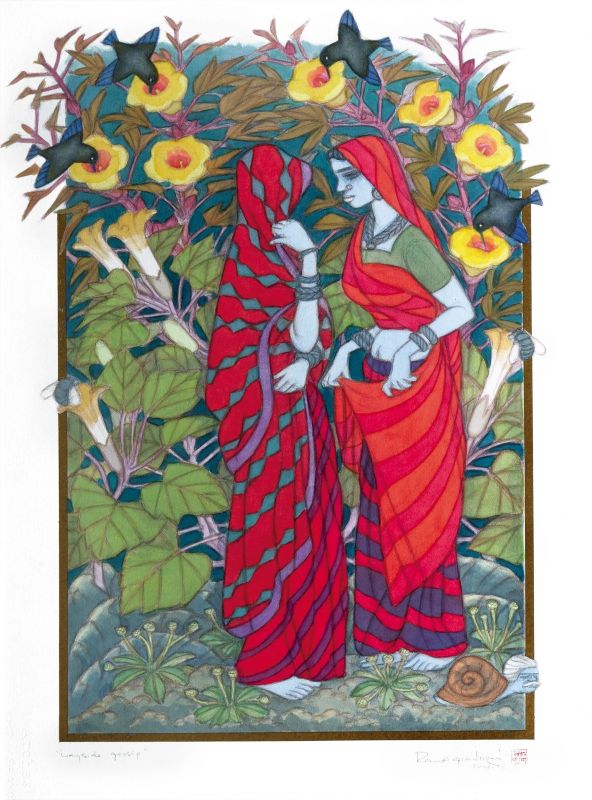 Ramachandran tarries along, with his steady brush strokes creating many poignant paintings, year after year.

He has, by using a myriad variety of techniques and visual elements, created a complex and invigorating body of work. While his affinity towards painting is well-known, A Ramachandran has worked with many mediums throughout his journey as a sculptor, children books illustrator and printmaker.

Revealing what art lovers in the city can expect from the artist who has made his mark on the Indian art scene in many ways and his show A Retrospective of A. Ramachandran, that promises to offer an expansive overview to his practice, he shares, “There will be over a 100 paintings, sculptures, graphics and drawings spanning five decades of my works from 1964 to 2016.”

It all started at Santiniketan, when Ramachandran learnt with great curiosity under the aegis of his Fine Art masters Ramkinkar Baij and Benodebehari Mukherjee. He owes it all to the cultural and intellectual milieu of Santiniketan that drew him closer to the art traditions of India and other eastern civilisations. It was here, he states, that he began his lifelong research on the mural painting tradition.

“I’ve been painting since I was a child. I studied Malayalam literature in Kerala, but I was lucky to have received a scholarship and my parents allowed me to go to Santiniketan that changed my whole concept towards life and art. It gave me great clarity. I was fascinated by murals as a child in Kerala, and later I got a chance to study them extensively and learn about our traditions and culture. It was an eye opener and gave me great vision. I started as an angry young man and my earlier works were political as I was a young revolutionary then, and wanted to fight, but over the years, there’s been a drift in my works. I believe art is an expression like listening to music,” the artist explains of his shift from expressionistic style reflecting the angst of urban life to nature.

He firmly believes that art should be self explanatory and should not require any explanation or have a manifesto. “I developed my own philosophy gradually and found a different meaning in my works over the years. I never followed trends and don’t like to fit into the tight mould of modernism or post-modernism. I’ve never been part of any movement and follow the ideologies of my teachers. I like to combine my influences from literature, folklores, mythology, other painting traditions from India and go to Udaipur and nearby villages every year,” shares Ramachandran who’s vibrant colours, lyrical figures and depiction of themes binds the aspects of fertility, memory, and nature and have come to define his oeuvre as an artist.

From urban reality, he moved focus towards tribal community life; especially the tribes from Rajasthan, whose lives and culture gripped his imagination.

The Delhi-based artist adds, “There’s something about the life and customs in villages, where people live in complete harmony with nature, which I always seek to explore. I’m identifying myself as an Indian artist to see what I can do differently than the accepted norm of art and installations. I’m a purist and believe in Indian forms of miniatures than the so- called modern art.”

A Retrospective of A. Ramachandran Works from 1964 to 2016 is on display till October 26, from 10 am to 5 pm at National Gallery of Modern Art, Bengaluru.