It’s very normal for any classical dancer to give a performance with live, vocal and instrumental music. Of late, there are series of programs which have solo Carnatic vocalists and classical dancers coming together to create a memorable stage performance. Well known dancer Shobana  and Carnatic vocalist Abhishek Raghuram came up with one such performance.  The evening started with Shobana dancing to a traditional classical music ‘Varnam’ set to ‘Raga Shankarabharanam’. One could see Abhishek Raghuram singing with immense caution to ensure that the pace of music and dance went together.

“For me, the history of dance as known to us is being explored and presented. It may have been something else before the period known to us. As times have changed, so has the thought process of society and the creative pursuit of a performer. Giving a performance in Hyderabad is much easier as all the song lyrics are in Telugu language. So it’s very easy for you all, no explanations needed,” exclaimed Shobana. 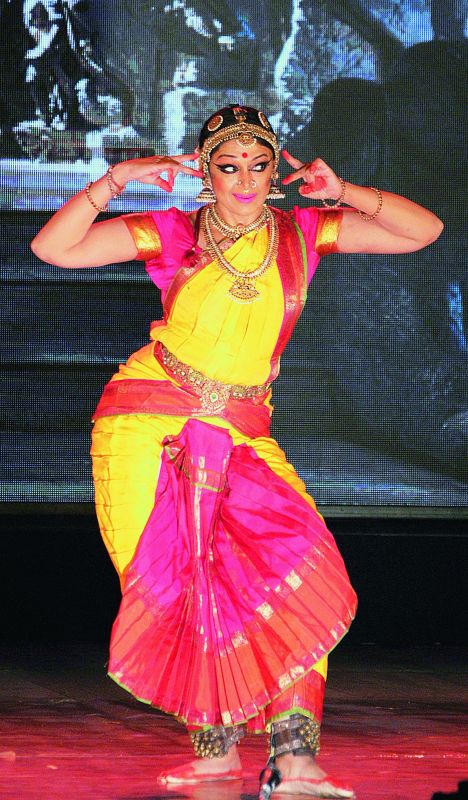 In between, Shobana portrayed the different ‘Vrittis’ of ‘Natyasastra’ which attempt to bring in the transformation of an individual to a performer on stage. And contemporary to the core, she mimicked a message to the audience not to take pictures of her on the mobile phone during her Abhinaya performance, much to the amusement of the audience.

After some time, it was the turn of Mridangam player Anantha R. Krishnan to play rhythmic patterns giving the audience an opportunity to reciprocate with rhythmic clapping. The closing piece ‘Bhavayami Raghuramam’ encompassed the gist of ‘Ramayana’. It saw flashes of brilliant musical score from Abhishek Raghuram equally matched with crisp footwork by Shobana. The audience enjoyed every moment of the performance and appreciated with a wholehearted applause. “This is one of the best audience I have performed for,” said an excited Shobana.