B. Jayasree near her art work

Many would agree that art and physics are as different as chalk and cheese, but for some others, they are related in unbelievable ways. Concepts having scientific basis are art in itself and they help us visualise things that are difficult to imagine. Artist B. Jayasree, inspired by this correlation between art and science, has come up with a painting exhibition to prove the String Theory via art. 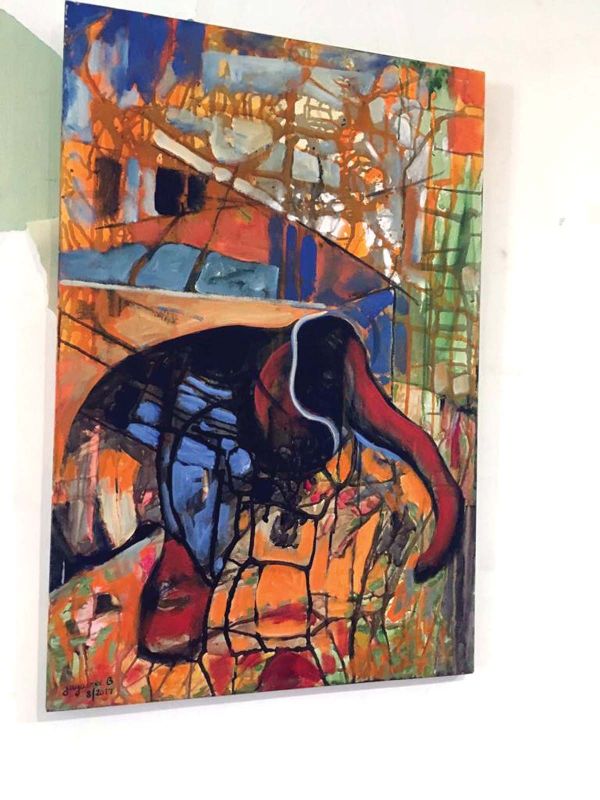 Jayasree started painting while she was in college under the guidance of artist Ravishankar. "I used to focus mainly on painting objects and landscapes. After taking classes from acclaimed artists like B. Dethan, I started to concentrate more on abstract paintings," says Jayasree, who received formal education in art only after the age of 25.

"The String Theory in physics is formulated for understanding and studying the interaction and behaviour of strings in space. Strings are those one dimensional bodies of objects. The behaviour and interaction of these particles are studied with the help of this theory," explained Jayasree, who takes immense inspiration from the paintings of the Spanish painter Picasso.

Jayasree zeroed in on this concept while reading the theory. She felt that the space based on which the theory is formulated is this world. She compared strings to humans and studied interactions and energy transformation among them. Then her imagination crossed horizons of physics. Humans, like strings, exist by interacting with others, she says. The paintings attempt to make science a social concept, which are now showcased at the exhibition.

"When I read about the theory, I just wanted to bring it on the canvas," Jayasree explains. The exhibition is going on at Alliance Francaise de in Thiruvananthapuram.

An alumnus of All Saints College, Thiruvananthapuram, artist Jayasree has participated in several group exhibitions and her previous solo exhibitions had received critical acclaim. She took voluntary retirement from LIC to dedicate all her time to art.

Apart from paintings, Jayasree focuses on hand sculptures and is planning to conduct an exhibition of her sculptures made from junk materials in the coming months. The current exhibition would go on till May 11