Here is an excerpt from Princess Mandira — Destiny’s Child by Madhurima Jain, that sums up the book in a nutshell: “She will marry someone from outside the Rajput clan,” Raj Guru says in a soft, low but clear tone, every word falling like pebbles in the stillness of water. Shock waves reverberate inside the walls of the Raj Mandir. Everyone is dumbstruck as this is unthinkable and unacceptable.

The Raj Guru shakes his head slowly and replies, “I have done my calculations many times and the same reading keeps coming out every single time.

She will not marry anyone from Hindustan! The person she marries will come from across the seven seas.” 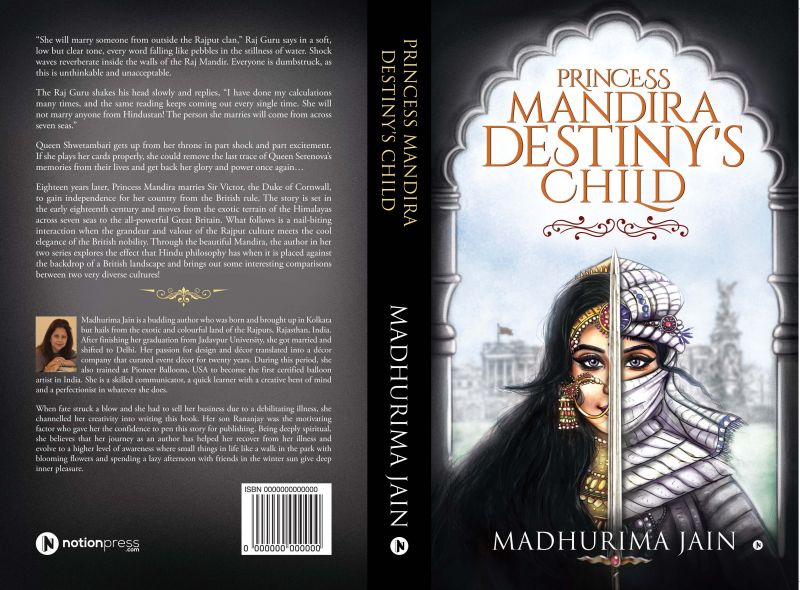 And just like that, the narrative of the book flows like butter. Courtesy the dramatic highs and pauses, the reader is made one with the drama. The plotline of the book revolves around the struggle and sacrifices of a woman whose love for her country knows no bounds. At the same time, it is the story of a princess who had to balance between the expectations of her royal family and her beloved-yet-chained country.

“Indians look up to anything western and my story is a small endeavour to show the depth and richness of our culture, which is showcased by my main protagonist, Mandira. I was fascinated to explore the interaction of the British nobility with a Hindu princess. Maybe our history would have been different if the British court had been exposed to the deeply secular Hindu philosophy, as I have imagined in my narrative. This was my motivation while writing my story,” says the author.

Madhurima was born and brought up in Kolkata into a very traditional, conservative Jain family, but she hails from the land of the Rajputs, Rajasthan.

After completing her graduation from Jadavpur University, she got married to a man of her family’s choice and moved to Delhi. Her passion for design and décor motivated her to found a company that curated event décor, which she ran for 20 years. Whether it was her failed marriage or loneliness resulting from her sons leaving for the sake of jobs, she refused to bow down in the face of adverse circumstances. She even had to sell her business due to an enervating illness. And now, she has channelled her creativity into the book.

Now whether it is a coincidence or not, Madhurima’s protagonist mirrors the author’s strong will and grit despite facing immense hardships. In the narrative, Mandira travels to Britain with a strict aim in mind, where her Rajput fortitude is pitted against British nobility. The consequence that trails her is a never-ending clash between the cultural extremisms of the East and the West. Through the strong-headed character, the writer wanted to explore what happens when our country’s ancient Hindu philosophy is allowed to directly clash with the modernist views of the British elite. The characters and the 18th century setting clearly make the readers realise how there was always an invisible line between the two parallel sociocultural universes.

The stories of both the fictitious and the real woman are awe-inspiring and demand a grand salute. But, the similarity between the two when it comes to a never-give-up attitude and the endless power to follow up a gloomy period in life with a bright one, is the link that binds the reader and author together through the captivating story.