In the history of Independent India’s long list of Prime Ministers, few tenures stood out for their audacity, impact and hope. His choice as Prime Minister was an improbable one facilitated by a series of calculations and estimates on loyalties by the Congress Party chief. His term as Prime Minister was tenuous and shaky every day of those five years as Rao unleashed a wave of economic reforms that were to fundamentally alter the destiny of post-Independence India towards glory and globalisation. The economy continues to expand 25 years after these measures were announced. While there have been many episodic accounts of these dramatic years when India had to airlift 21 tonnes of gold to the Bank of England to meet its essential importing needs, what was missing was a biography of the man who steered India through those turbulent years, warts and all.

Vinay Sitapati, a political scientist, lawyer and a journalist fills this void by reconstructing the life and times of India’s most-unsung and misunderstood reformer-Prime Minister who came without a surname or baggage that binds generations with ideologies. In the words of the author, “…Rao was a ship that sailed out every day into a storm… That the ship of state remained afloat for five full years was itself a wonder.” Tracing Rao’s beginnings in Telangana as an Andhra socialist to tracking his rise in politics with portfolios in education in undivided Andhra Pradesh, Sitapati gives a majestic account of the sparks of intellectual and socialist awakening in Rao before Indira Gandhi entrusted him with bigger and meaningful assignments including that of a puppet chief minister of Andhra Pradesh.

The author expands that journey with lucid and lively anecdotes with experiential wisdom that came out of Rao’s sagacity and self-conscious acumen. Sitapati’s narrative is enriched and augmented by the copious notes and private diary jottings made by Rao himself: “…As he went through life, he found that less and less of his self determined his action”. True to these words, what we find is a pacy account in 15 chapters of India’s most resourceful Prime Minister.

Though there have been a slew of biographies about Rao and books by some of his famous running mates like Manmohan Singh’s daughter Daman Singh and Jairam Ramesh as well as detractors M.L. Fotedar and Arjun Singh, Sitapati’s book succeeds in steering clear of hagiographical tendencies — it never deifies Rao beyond the achievements he merits nor does it miss to point out his shortcomings. 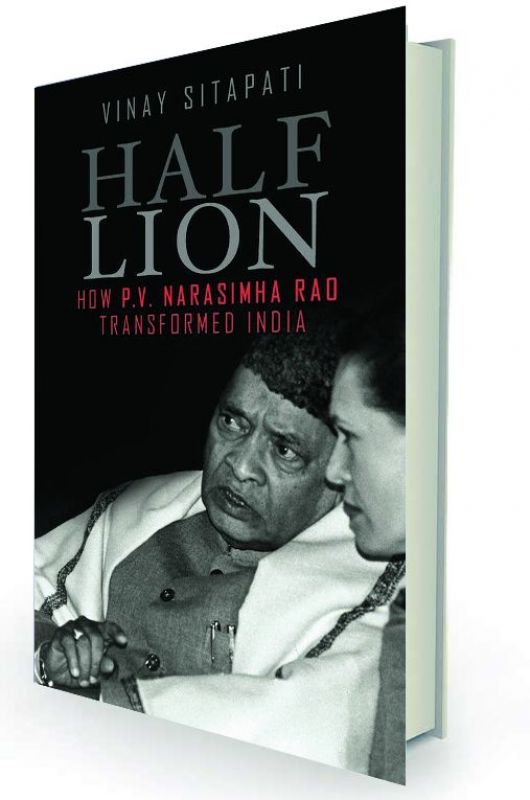 For instance, the author rightly observes, “On capital market reforms, he trusted the advice of Manmohan Singh and G.V. Ramakrishna; on satellite television, he mistrusted his own instinct to regulate.” In unravelling the many episodes that made Rao court controversies as well as decisive battles, the author gives a laser-sharp peek into the mindset of a scheming and ambitious politician who had his strengths — agility, foresight and perspicuity while getting soaked in mundane politicking a’la Machiavelli and Chanakya —— two political strategists who are personified in Rao’s machinations over his adversaries in his career.

At a time when we celebrate fallen angels as well as neo-liberals, Sitapati’s book, Half Lion: How P.V. Narasimha Rao Transformed India, is a worthy addition that has its literary merits in the way the author encompassed the personal triumphs and failures of a home-grown statesman with an erudite worldview into a compact volume of nearly 400 pages. Rao’s tenure is also marked by political upheavals, scandals and confabulations that eventually consumed the man — Sitapati’s book is testimony to how a political biography should be — it illuminates with insights without being didactic and opinionated and gives us the real legacy of Narasimha Rao for the current and future generation of politicians.

Read: Q&A: ‘Rao learnt from his failure as CM’

The author sprinkles the wisdom of Rao at every turn in decision-making. For instance, when it was time to choose a principal secretary P.C. Alexander suggested G.V. Ramakrishna to Rao. But the author writes: “Narasimha Rao, whose failure as Andhra chief minister had taught him to be conscious of caste combinations, rejected the name, saying, ‘The principal secretary and Prime Minister should not both be south Indian Brahmins… that would send out the wrong message.”

Narasimha Rao is self-effacing when he tells Manmohan Singh on being appointed finance minister that “you will have a free hand. If the policies succeed, we will all take the credit. If it fails, you will have to go.” Sitapati’s biography succeeds in ways that few political biographies in India have. Most biographies suffer from incurable love and admiration for the subjects like those by M.O. Mathias (on Nehru) or R.K. Dhawan and K.A. Abbas on Indira Gandhi and so on.

Sitapati’s biography is different — it reveals and reflects without prejudice with singular focus on the subject i.e., Rao. The only flaws are those created by the author: He chose to steer clear of detailed personal encounters with women who travelled with Rao all his life (in a way that Rao himself elucidated in his semi-autobiographical work The Insider), the  truth behind the role of controversial Swamis like Chandraswami whose flair for skullduggery brought much disrepute and headaches to Rao’s government or the episodes of his friendships with scribes and Leaders of the Opposition like Atal Behari Vajpayee and L.K. Advani.

The author’s interviews with his close aides like P.V.R.K. Prasad, Ramu Damodaran, Kalyani Shankar, G.V. Ramakrishna and Subramanian Swamy front-load the biography with epic events that happened during the eventful five years of Rao’s prime ministership but throw less light on the state of Andhra Pradesh which got splintered into smaller states subsequently. Despite minor flaws, the book stands out for its scholarly output and will emerge as a benchmark for political biographies about Indians instead of encouraging self-congratulatory outpourings by seasoned bureaucrats and politicians who have seen better days. Rao’s life has seen it all: Rise through the ranks, razor’s edge moments of crunch-time decision-making, events with binary consequences, years of political exile and wilderness alternating with exemplary governance.

Had Rao been alive, his remarkable diaries and archives would have done the job with help from the future advantages derived by billions of Indians who are blessed by economic prosperity that his political constituency failed to see in those renaissance days. Indians can now thank that Rao’s Boswell has come back in the form of Vinay Sitapati which has lessons and insights galore to take Rao’s legacy to the next level of reforms. Rao himself would have ceased to be a half-burnt body had he been alive to read this biography.

Sridhar Sattiraju is a bibliophile who follows the fields of economics, politics and entertainment. He is vice-president in an MNC bank.

■Q&A: ‘Rao learnt from his failure as CM’