Giving colour to his memories

A pen sketch inspired from Eric Carle’s ‘ The hungry caterpillar’.

Each of Siddharth Muraly Nair’s paintings are reflections of the tiny tales that made up his childhood. From a memory of his mother holding him as a child to the effort his parents took to help him regain his speech, Siddharth threw open to the world all the happiness in his memories. The art exhibition ‘Me, Siddharth’ currently held at Durbar Hall Art Gallery showcases the works of 16-year-old Siddharth, son of Muralee Thummarukudy, Chief of Disaster Risk Reduction in the UN Environment Programme, and Dr. Jayasree Maniyelil, Pathology Consultant at Lakeshore Hospital in Kochi. 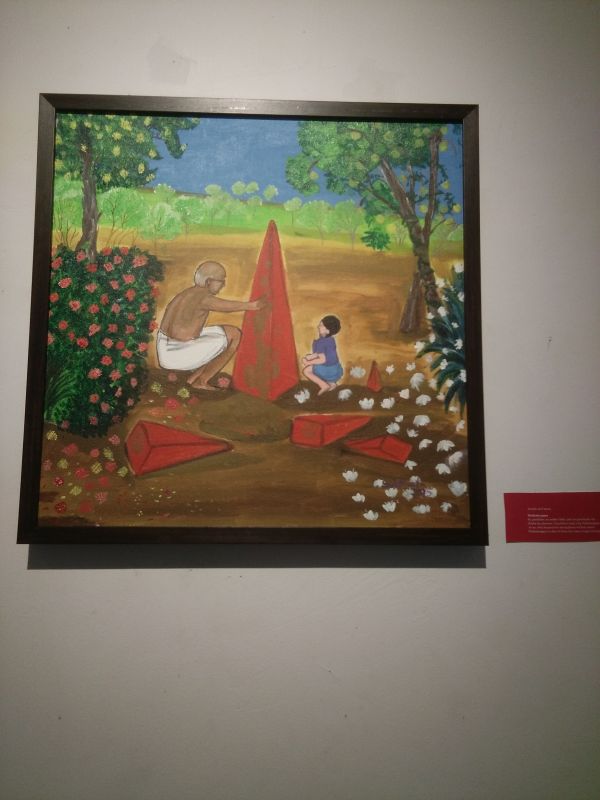 What makes each of his works special is the small note beside them that describes the memory associated with them. Siddharth was diagnosed with Asperger’s Syndrome when he was two-and-a-half years old, but that did not stop the young boy from falling in love with colours. Siddharth’s mother, Dr. Jayasree recalls, “He had an interest in painting from when he was two years old.”

His first major work was a calendar. “We happened to visit Singapore in 2011. While returning from there he had sketched a lot of sea creatures. So we thought he could make a calendar with it. After two years, we brought out a calendar,” she says.

Siddharth, the man of the moment, was surrounded by well-wishers and art observers when he was whisked away by his mother for the interview. When quizzed about how he feels after exhibiting his works for the first time, he says, “I feel very happy. I enjoyed working on all these paintings.”

“My mother used to draw. I used to look at her work and draw. Mom taught me to draw first. I like working on all mediums. Here, I have displayed works with acrylic, watercolour and pen drawings. These paintings are what I learnt from childhood.”

Siddharth loves travelling. He has been a part of his parents’ travels since a very young age and his paintings are a testimonial to all that he fondly remembers from each of the trips. A fountain from Geneva, swans and the snow of Switzerland are all vibrantly captured on his canvas.

“I love travelling,” he says. “He loves it and has been doing that from such a young age,” adds his mother.

“The theme he has used here is childhood. The calendar he did this time too had a theme. We have displayed 15 acrylic and 12 pen drawings, plus the works he had done for the first calendar,” says Jayasree.

The exhibition will conclude on January 7.