Food for art gets a creative spin

Various exhibits at the showing

“Whether we view it for pleasure or create as artists, art can serve us in so many ways.”
— Nancy Reyner

When it comes to curating and organising creative art shows, artists from namma ooru have always taken the leap, and how. Last few months of 2017 witnessed some amazing shows which captivated many audiences. After what we saw this year at the Venkatappa Art Gallery, it is just getting better with every show that has been planned at the venue. Thanks to some extremely creative minds at work and passionate artists adding to the flavour, the current show at Venkatappa Art Gallery called ‘Foodu Sambhrama’ is indeed as flavourful as it gets. It is a completely new concept which we are sure hasn’t been heard or seen before. Encouraged by their experiences with the ‘Gombe’ Sambhrama exhibition, the art group was motivated to make an artistically investigative exhibition again to address the senses and curiosity of the wide spectrum of people visiting the Venkatappa Gallery. The date and timing of the exhibition was spot on, and well-targeted considering the number of people that came to witness the museum thanks to the holiday season, and year-end. The predominant concept of the show is based on, ‘We eat to live.’ The multiplication of diners and eateries in urban areas catering to the taste for national and global cuisine appears to suggest that individuals are able to pick how they live to eat. Be that as it may be, the feeling of a community, the custom of eating at homes or in public seems normal — parties, at marriages, eateries and so on. Provincial inclinations and regional preferences, atmosphere, religious taboos, have determined what kind of food gets eaten, how it is prepared and how it is served. In India at present the issue of food has become a political tool that lends this subject an edge and topicality. The ongoing show has an eclectic juxtaposition of photographs exhibited, live food sessions, lectures by artists and live performances as well. Notable artists like Pushpamala N. presented her video titled Rashtriya Kheer  and Desi Salad. Arpita RG who has worked for over a year with school children in her native village Ramalingapura in Tumkur District and has worked on the subject of food presented her research through children’s drawings, stories, videos and local recipes. While Suraj Stephen D Souza presented his photographs and installations and Paramesh Jolad did his trademark performance. Meena Gyanchand curated some wonderful millet dosas. Suresh has played a very important part in getting everyone’s act together. Paramesh Jolad echoes, “My performances are centered around the theme of cow slaughter and how the differences in ideologies between vegetarian and non-vegetarian food has created a vacuum amongst us.”  As an interactive, the visiting public was asked to write down or orally narrate a recipe that was printed, compiled at the digital library set up in the exhibition space. The art show was a refreshing way to conclude the year which promised a lot. The new year looks vibrant with artists and curators so committed, the future bodes well for Bengaluru. The show was on at the Venkatappa Art Gallery till December 29. 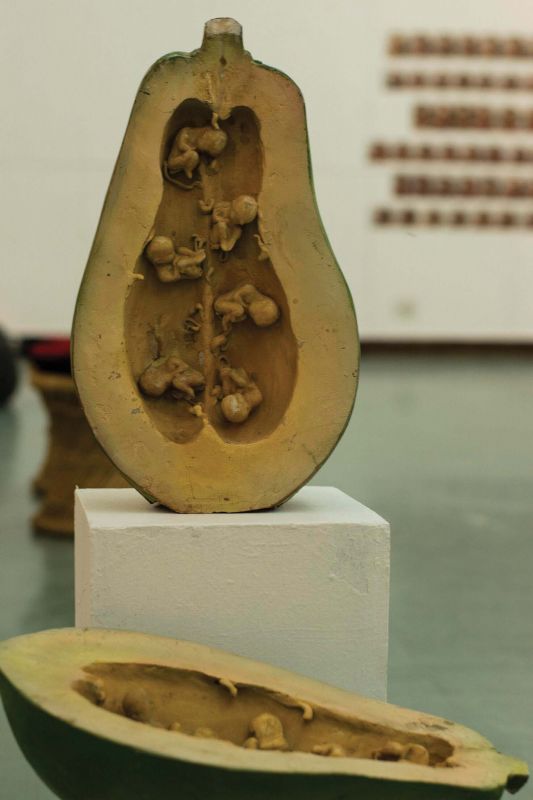 A fabulous fantasy land of humanity