Show titled, Dynamic desires presently on display at Dhii art space contains works rendered by three artists. Their academic background is the common thread that binds them together as all of them pursued heir post graduate studies in fine arts from Central University, Hyderabad. All three artists make a mark not only by their novel and new stances on visual level but also for their in depth involvement with their concepts that grants the works a mature finesse.

Anila Kumar Govindappa works around his experiences of exploring an urban city from varied perspectives and grounds. A series of his wooden sculptures reinstate the essence of urban landscape in a simplified manner. The wooden blocks painted in iridescent palette look like toys. “The assemblage is very playful in nature and it is interactive as the viewers can arrange, scatter and juxtapose the blocks together,” says Anila. A few of his canvases are also on display, one of the most intriguing composition is titled, Land is not a cake. The ironically charged work is divided in two sections; both the sections are iridescently hued and richly flamboyant. Left side contains the image of a huge, mammoth cake and the other side a section of a landscape. The thoughtful work manifests a simile between a cake and land wherein the artist brings forth the idea that the land is also getting divided as easily as the act of cutting a cake is.

Equally intriguing paper cut series of works by Mariraj Rajasekaran delve deep into the many facets of urban existence. “Urban cities constantly overwhelm the people from rural and under developed areas. The urban city provides space which gives life to all, but not everyone leads a life they had dreamt of. This makes them struggle, fight and violate to make their lives better,” explains the artist. In sync with his thought process the fragile and sensitively delineated paper cut works engage the viewer with their emotive and philosophical extents. The repetition of patterns and imagery initiates and supports the visual rhythm and flow of energy. 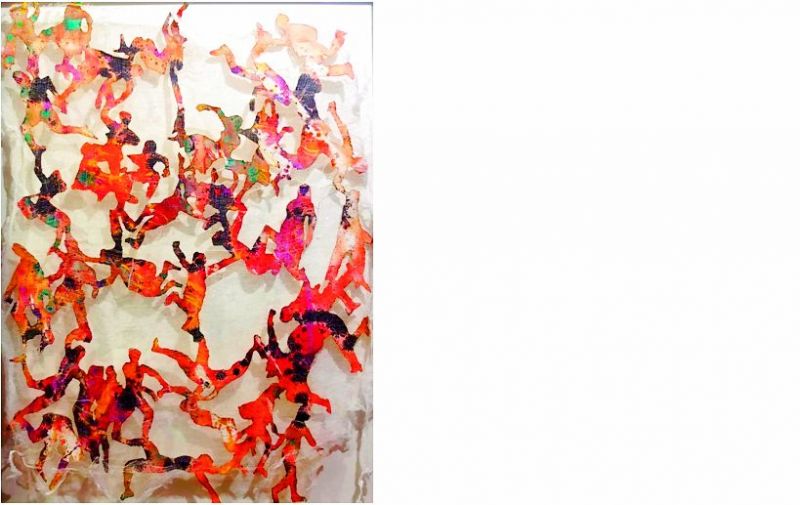 On the other hand, the mixed media works rendered in latter print ink, acrylic colour and charcoal by Virendra Maurya are completely filled up with myriad textures, colour applications and recognisable forms. The huge works intrigue with their surrealistic charms and have been rendered in an aptly blended combination of representational elements as well as abstract spaces. While talking about the conceptual dimension of his work the artist says, “My work is process based which has connection and is highly inspired from my agricultural background and keen environmental observation,” he concludes.