Ritu Singh’s debut book Stark Raving Ad, a giddy guide to Indian ads you love (or hate) resonates with wit, interspersed with a deeper understanding of advertising and marketing solutions and facts which she presides over with humour.

When an ad woman sits down to pen her thoughts, the irreverence and tongue-in-cheek humour hangs like a chimera over her anecdotes. All ‘ad’-hoc, in the sense that they stem from her years in advertising with JWT. Ritu Singh’s debut book Stark Raving Ad, a giddy guide to Indian ads you love (or hate) resonates with wit, interspersed with a deeper understanding  of advertising and marketing solutions and facts which she presides over with humour.

She calls it a “whistle-stop tour of the advertising landscape with an intuitive and open-ended selection of brands and ads — the hits, misses, scandalous and iconic.” It also tells a tale of how India has changed from the “washing powder Nirma” days to today’s inclusiveness.

Being in advertising, it was only a matter of putting pen to incidents that made Stark Raving Ad a reality, “It seemed a logical thing to write about — ads as business solutions and as entertaining facets of our lives. When I started, I thought of it being all about facts with graphs and charts, but the jokes and one-liners kept creeping in, and stayed. It’s a fun profession, so its case studies deserved being written about in a fun way,” Ritu elaborates.

The Dilli girl at heart recalls a scandalous chapter, “I think it was the Chaddi pehan ke FOOL khila hai chapter which has scandalous ads. It was funny to see our dichotomies. How we can be prudish but also see nothing wrong in machismo messaging. Everyone knows surrogate advertising when we see it. And so what if certain ads have been banned, we know we can find them online!” 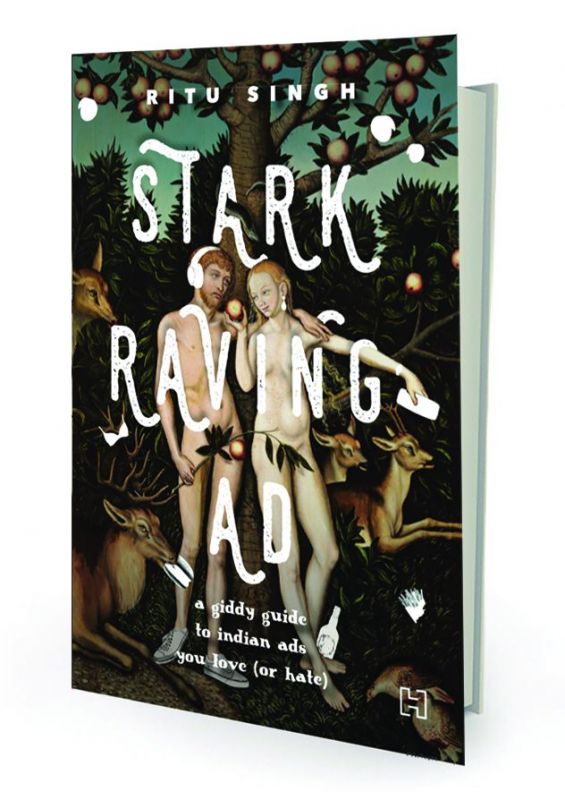 Her army upbringing paved the way for an explorative context giving her ad-verses a resonance of advertising history. But she does not think so. “I wish! I do hear magical tales of army brats who are fearless and have that kind of adaptability Darwin would’ve loved to examine. But I remember my many, many schools and house changes accompanied by a feeling that was not always brave. The feeling stayed with me for life — a feeling of ‘adventuring’. Along with a lasting fascination for the Shaktiman trucks — our school buses!” says the author whose time at JWT was a montage of whimsicality. “JWT was like walking from an ordered life of a cantonment to a place where there were no rules. There were folk in Kanjeevarams as well as in hawai chappals. Forget military katora cuts, some guys wore their hair in glossy blunts. Everyone swore at everyone. It was fascinating! My fondest memory is my first film I conceptualised for Pepsi and it starred Kapil Dev’s mother instead of him,” recalls Ritu.

Brand connect lies at the origin of her book. But it also explores how ads are a close part of one’s TV watching. Ritu shares, “There can be so many factors at play in making an ad iconic. When conceptualised, Surf’s Lalitaji was found to be insufferable in research groups. They hated her, but some key brand people insisted on her. Today, she is considered iconic.”

What augurs well for the industry is that it is more inclusive. And intrusive. (sic) The wanderer at heart, she has rubbed noses with the Maoris, eaten garlic icecream, and more. “The US is spectacular. It’s like a stunning drive-through of glowing volcanoes, ancient petroglyphs, jaw-dropping views, tall mountains. We visited Denmark recently, and while the castles, Scandinavian design and ‘the happiest people on earth’ tag is all very noteworthy, one of the most memorable moments was bumping into a bunch of Vikings roaming the streets giving mean, marauding looks while wearing towel-capes, plastic helmets with horns and guzzling beer.”

Her favourite ads? “I’ll admit to playing favourites — I quite like Indian ads, as they are reflective of our personalities and quirks. I still like those retro Channel V Quick Gun Murugan ads,” she says.