Solitude the meaning of being lonely

There is the tattered old chair standing amidst debris in a scrapyard, where everything seems bleak.

As his bus neared the Swiss border, officials got on board and asked to see his luggage. When he went to retrieve his bags from the storage space at the back of the vehicle, he found, to his total horror, that he had been robbed during his journey out of Paris. “It’s a big beautiful city and I was very taken with it. I didn’t worry too much about my luggage because I didn’t imagine something like that could happen.”

Left with one small bag, some cash and no passport, Sandeep, who had arrived in Europe as a resident at the Litchenberg Studio in Germany, as part of the Goethe Institute’s bangaloREsidency, was now stranded.

“I called a friend,” he says, who came to his rescue, spiriting him away into a forest, where a cluster of caravans stood parked. “This place was a hideout of sorts, all kinds of people came here. People from the LGBT community often stayed here and sometimes those without the right papers, too. At that time, without my passport, I was one of them too.” He stayed there for nearly a month and was quite sorry to depart. The blue chair, lying in a little field of flowers, is his takeaway from this experience, of a time when he found himself lost and  on his own. 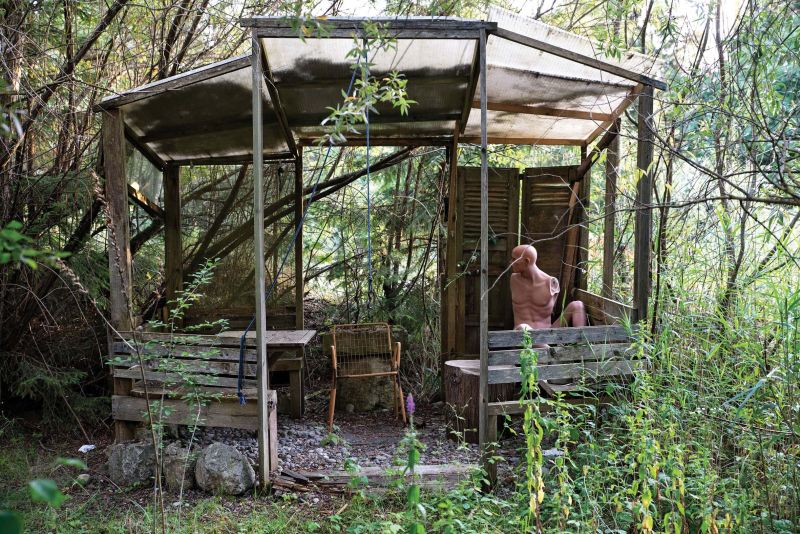 A coordinator at 1 Shanthi Road, Sandeep was used to having people around him and the relatively deserted streets in Germany were a sudden novelty. “We would have a lot of events at the gallery and after the initial mingling, I don’t have much to say. I usually retire to a corner and people-watch. In Europe, however, even though there were fewer people around, I never felt that way. I learned then that loneliness comes from within.”

The works are an exploration of solitude, ranging from serenity to desolation, confirming Sandeep’s idea that loneliness is a state of mind. There is the tattered old chair standing amidst debris in a scrapyard, where everything seems bleak. Sandeep surprises you when he says the photograph is taken in Bengaluru, in the heart of bustling Majestic. “Things are never what they seem,” he says. “I was having drinks with a woman in Germany and she opened up about herself, telling me of someone who broke her heart. When I first saw her, she was smiling and cheerful. That made me think perhaps everyone carries sadness or loss deep down - but really, it’s just there ‘s always more than what meets the eye.”

Even loneliness, he says, has so many different shades, “The man looking at the mountains is happy, he is in awe of the beauty that surrounds him.” All the photos, save four a couple, are candids, “That’s why most of the pictures have been shot from the back,” he laughs. “One has my friend looking directly into the camera, just like the flautist.”

One morning, as Sandeep walked to see the Berlin parliament, he noticed a man set up a little performance space to play his flute. Sandeep wandered up to take a photograph, which irritated the musician. “I began to walk away but he started shouting, ‘You stupid Indian, come back, you need to pay me’! I didn’t stop but five minutes later, it struck me that I really should give him some money and I went back. We got to talking and he told me he comes here everyday and that he understands loneliness too because he goes back to an empty room each night.”

Shot in Germany, Paris and, Switzerland and Venice, Sandeep brings poetry to desolation and to decrepitude, a broken chair in a rotting, wooden house finds the sanctity of a secret garden. “The beach pictures are all from Thalassery, my hometown,” he remarks.

Binding all this together is the sense of love and loss, which Sandeep expresses through short writings through his catalogue. “It begins and ends with a letter from this person I once loved,” he says. “The show is about him, really. But now I know that everyone has been hurt in some way, the trouble is we are used to hiding it away behind a smile or a friendly greeting.”