Photographs by Bina Kak from the book.

The question is who are the silent sentinels of Ranthambhore? The pillars of the fort and the ruins dotted around? Certainly not the tigers because they live their own roaring, growling, purring lives in and around the fort — they are in fact the life of Ranthambhore, otherwise the ruins would be restricted to pilgrims and the villagers who live in and around the area. 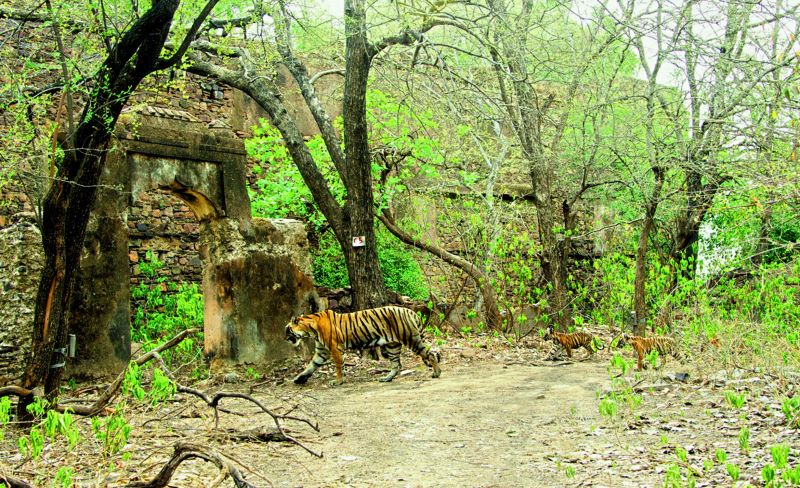 Bina Kak’s book of photographs has the advantage of being a minister of tourism to its credit apart from Kak’s dab hand with the camera. Kak uses her position to ensure that she is in and around Ranthambhore at more advantageous times than the rest of its visitors and is lucky enough to throw up the camera at the right time without shakes. And yes, she does point out that her photographs were on the spot to save a tiger that had a maggot-ridden wound and recorded Sundari’s being freed from her tracking collar. 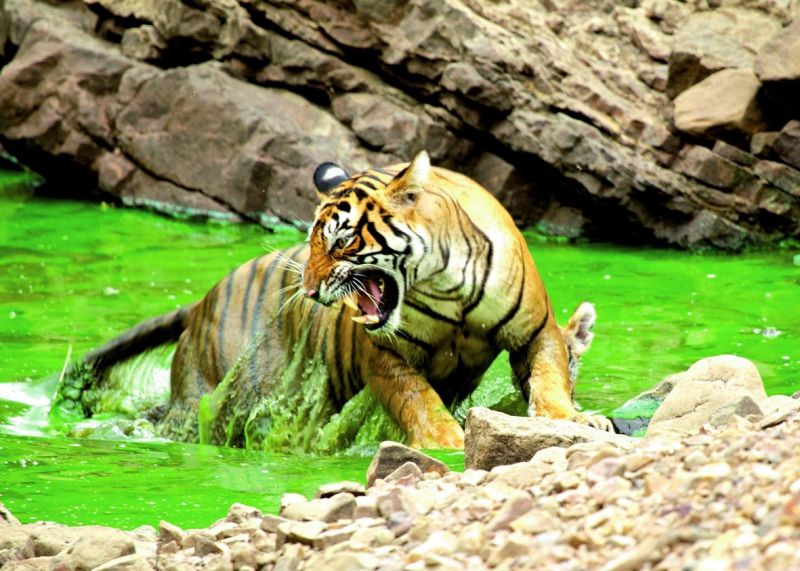 Her photographs for the most part focus on the Page Three tigers that everyone associates with Ranthambhore — Machli of course, Noor, Sundari, Hus’nAra and their families. Tigresses rather than tigers because, for Rajasthan tourism, it is the tigresses that carry the species forward. Noor begat Sultan who was one of the largest tigers of Ranthambhore. Two tigress cubs were used to repopulate the denuded Sariska. Machli gave birth to generations of tigers and was the longest lived on her species in the wild — and was the only tiger to be honoured with a State funeral, though mercifully photographs of a wild animal’s corpse being inducted into state hierarchy were not included.

Kak is full of the stories that populate Ranthambhore adding to the celebrity status of its tigers. Sundari’s fight with her sister Krishna which led to inglorious defeat and demoralisation for example. Sundari’s hurt ego led her to disappear and whatever happened to her is unclear. In Kak’s book the photographs are far more important than the stories she has to tell because her message of the importance of preserving tigers comes through in her frames, tigers in all aspects of their lives — as hunters, loving mothers and creatures that prowl through the ruins past forest guards. However, she tactfully refrains from touching on grey areas like Ustad’s man-eating for example, contenting herself by describing him as savage. Of course, while organised tiger tourism brings in good money for the States, especially Rajasthan, the question is whether it is good for the eco system or not. Given the linking of rivers and the clearing of forest cover in buffer zones, tigers may be reduced to the status of tourist attractions without the freedom to roam the wild, reproduce and help guard the environment. While the Dalai Lama in his wisdom has spoken of the importance of nature, in the face of a photograph of a tiger walking past a jeep load of tourists armed with cameras the importance seems to dwindle – though that is the reality of tiger tourism and the survival of Ranthambhore as a one-time minister knows only too well.

Anjana Basu is the author of Rhythms of Darkness