A matter of life, from a past perspective

A scene from the play

A Matter of Life and Death is play that has many layers. Through this play, we find out that at every corner in history, man will have to introspect and see what should be his form of protest.

The play was first written by renowned dramatist and theatre director Badal Sircar as Baki Itishas which mean ‘remaining history’. The director of the play Ranjon Ghosal says, “Badal Sircar maintains that it has been a history of humanity and civilisation which has plagued us with wars, famine, injustice and cruelty that we have inherited. Today’s world is a reflection of the past. In this unjust world, what should a man do? Does he not have an option left like protesting? This protesting can come in the form of suicide.” In the play, Badal Sircar, says that suicide is not the only option while in protest. Ranjon explains, “The Japanese feel that the only way one can protest is by committing suicide which is violent. Through this play, Badal shows that behind the humdrum and daily chores of life, there is violent history. The calm that one sees in the middle class life is a dangerous calm. People who commit suicide are touched by this dangerous calm.” In the play, apart from the past, the team talks about the
violent future as well. The play talks about things like the environment, carbon footprint, pollution etc.  Talking about the uniqueness of the play, Ranjon adds, “We have tried to create a situation where the audience gets to know the various themes that we have tried to portray. The themes that we have spoken I feel are more relevant today than in the past.” The play focuses on a writer couple. Ranjon adds, “On one Sunday morning, the couple hears that Seetanath Chakraborty, someone they knew personally, had committed suicide. The husband suggests that the wife write a story about him since she was battling a writer’s block. Her story is enacted, and the husband rejects and writes his own version on why Seetanath committed suicide, which is also enacted.” The professor meets the ghost of Seetanath who turns out to be the professor’s alter-ego. 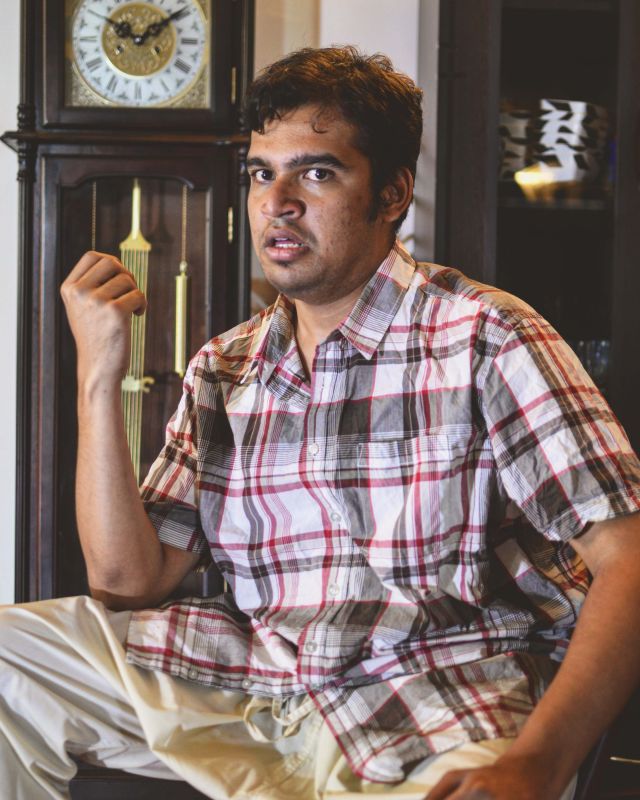 Since the show has two shows, two different people essay the role of Seetanath. Sagnik Sinha who has been in theatre for the past four years says, “Seetanath is the medium as well as the protagonist in the story. It’s not just one character that I play but three different ones. No parallels can be drawn. It was a challenge to portray Seetananth.” A software consultant during the week, Shivam Kataria also essays the role of Seetanath. He adds, “As an actor this is by far the most complex and layered character that I have played. In a proscenium play, one character has just one flavour and tone to it, but Seetanath has many layers. The concept is beautiful because it has stories within it. As actors, it is confusing as I had to switch quite fast into the other character.” Yashwanthu Sathu who has been in theatre full time plays the character in the stories written by the couple. He adds, “I will be playing Vasudev, the college professor. He is very attached to his family. I also play Bejoy, a part of the story written by the professor. Bejoy is the childhood friend of Seetanath who goes through a situation where he is not able to express himself.” The play was translated into English, Hindi and Bengali, and has been performed a number of times in the city. Ranjon feels lucky that the audience has always appreciated their work.

—The play will be staged at Kengal Hanumanthaih Kala Souda on June 2.