Artist Olaf Cleef talks about his love for India

The series represents butterflies, orchids, flowers, birds, the jungles and the fine rich silk of the state.

Bejeweled butterflies flitting across the canvas, abstract shapes in black, broken occasionally by myriad hued stones and decked-up gods and goddesses looking resplendent in precious jewellery. The paintings by Olaf Van Cleef attempt at going beyond the confines of the canvas amalgamating creative strokes with colourful shingles.

A scion of the famed Van Cleef family, the Paris-based artist is now all geared up to showcase his new artworks at the Dakshinachitra museum in Tamil Nadu from December 23.

Olaf is known for having made a name creating masterpieces on canvas that range from the abstract, to flora, fauna and demure figurines representing the pantheon of gods and goddesses in Hindu mythology.

However, what sets his work apart is the fact his illustrations are enhanced by metallic papers of different colours along with precious and semi-precious stones that give them a third-dimensional effect. They add a sense of grandeur to what he etches. 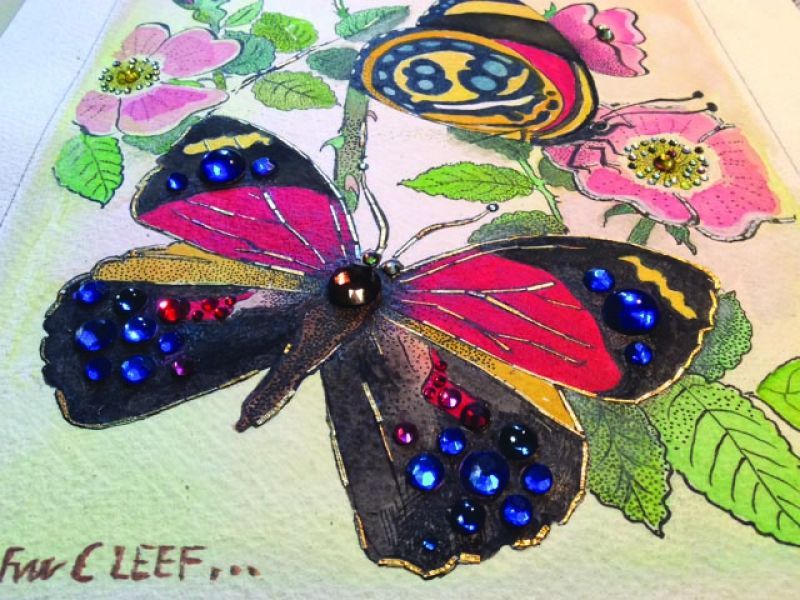 Brought up by his grand-mother Magda Van Cleef in Nice, in the French Riviera, the painter says despite coming from a celebrated lineage the first thing he was taught by his grandmother was that he had to help himself if he wanted to make something of his life.

And that, Olaf says, he discovered, thanks to his father’s second wife Annette Van Cleef. She was the first person to put a brush in his hand while they were in Africa. Living in Ivory Coast soon helped him discover scenery, which would make wonderful subjects for portraiture.

“One day while I was sitting in front of an anthill, I discovered the world of the creatures were constantly in a state of flux, like a quiet force. Now when I do mosaic, with 1mm and 3mm gold papers, I always think of those ants and that becomes my technique and driving passion. Art gives me a sense of peace and serenity.” 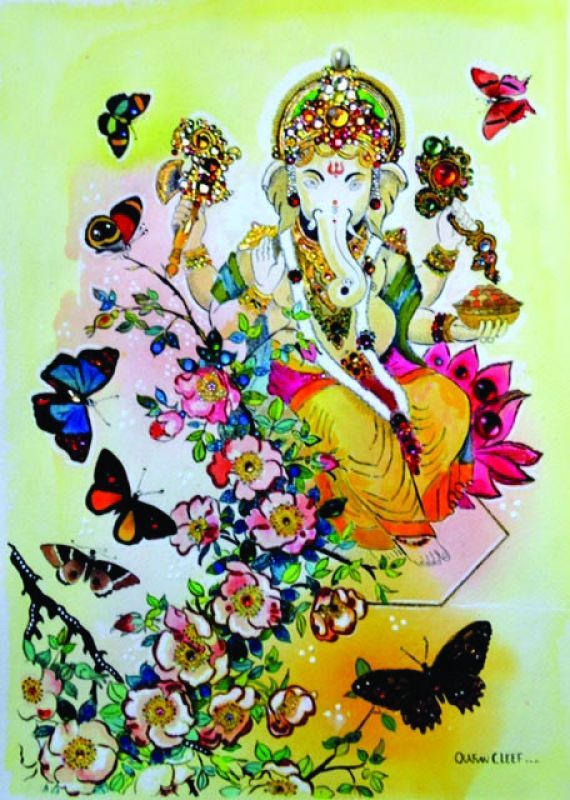 The former counselor of high jewellery for Cartier says his inspiration for art to a great extent is India as well. “You have the peacock, the elephant, the tiger, and then there are the resplendent gods and goddesses decked in fine jewellery,” he says, adding, with a chuckle, that unlike the young and beautiful Indian gods, in Christianity all the representations of God are just one old person.

While Annette may have pushed the brush on Olaf, it was his bejeweled grand-mum who gave him his passion for the stones.

“She was the one who put the love for diamonds in me. I remember her wearing two five carats on her two hands—one white and the other yellow. Years later that is what suddenly clicked for me — to merge jewellery and paintings.”

However, he did not become an overnight sensation.

When Olaf started with abstract, there were few takers. He goes on to recount that all his paintings got rave critiques from reviewers and media, but there were few customers.

“Unlike Klimt or Pissarro, abstract never gave me any identity,” he rues.

It was then Olaf discovered Ravi Verma.

“That put a revolution in my art. He was the first Indian artist I saw who painted the Indian mythology in a British style. This gave me the idea to do my own paintings of Indian gods and goddesses in the French style of Louis XIV, with pastel like the French artist and printmaker Jean-Honoré Fragonard.” 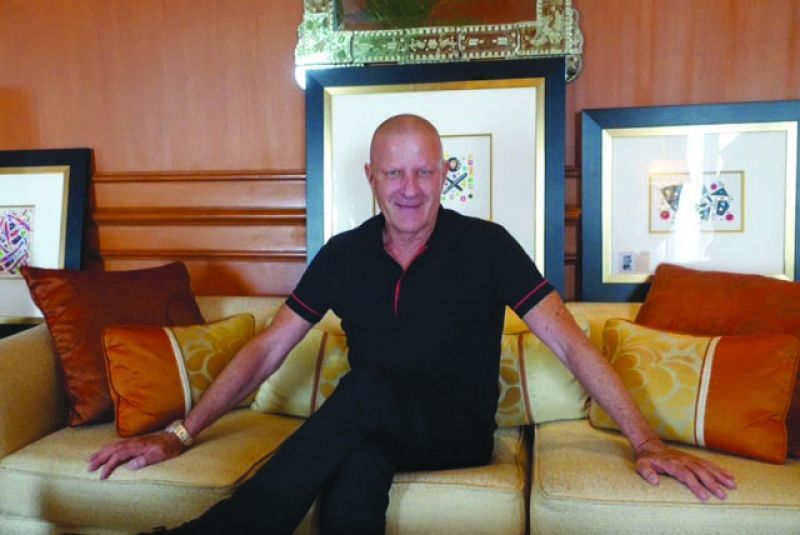 Olaf did his first major exhibition of with Pheroza Godrej, in 2008 and it was a resounding success with 27 paintings being sold within three hours of the opening. For the first time, the painter says, he felt he was just Olaf and not a Van Cleef.

Speaking about his art, the Van Cleef scion says he uses precious and semi-precious stones on his etchings to give them a third dimension and stretch the effect of his painting beyond the confines of the canvas.

“In my paintings, you have a three-point reference – reality, symbolism and imagination. Reality, for example, is Ganesha. Symbolism stems from the

fact that he is the protector of Mumbai and imagination is the stone which pushes the creation to another dimension.” Thus Olaf turns his paintings into experiences that push the mind to dream and imagine.

However, Olaf is careful his bejeweled etchings do not look gaudy. He believes his paintings have to look precious enough to go into Puja rooms.

They are not “Christmas cards,” he says, adding, “I do not put Swarovski crystals on them like you put sugar on strawberry.”

Interestingly, a little known fact about Olaf is that he is related to the illustrious Vincent Van Gogh as well and takes a lot of inspiration from him. However, he admits that if it were not for an American journalist who dug up the secret a few years back, he would never mention it to anyone.

He fears people will constantly be telling him he paints like Van Gogh.

Olaf was recently in news for having, for the first time, digressed to represent Buddhist motifs and iconography in his paintings.

During a journey a few years back to Bhutan, the Unic museum there welcomed him warmly, but felt his creations were too Indian to find representation and acceptance there.

“So I did 57 paintings in the Buddhist style. It was a challenge and I had to travel thrice to the country in three years to understand their art and artistic sensibilities.”

He adds that at the end of the period, 42 of his paintings went into the personal collection of the Royal family of Bhutan where the king gave him a “great honour” by having three of his works installed in the palace.

He is currently working on the Assam exhibition, which is centered on the theme of the flora and fauna.

The series represents butterflies, orchids, flowers, birds, the jungles and the fine rich silk of the state. The exhibit is supposed to go up in the Museum of Guwahati early next year.

The artist concludes, “I want to showcase my works in Assam because it is bang in the middle of the Silk Road, between Bhutan, India, Myanmar and Bangladesh. I want to be an ambassador of Indian mythology to the world through my paintings. That is my big challenge for 2018.”