“It is important to express oneself...provided the feelings are real and are taken from you own experience.”  Berthe Morisot. 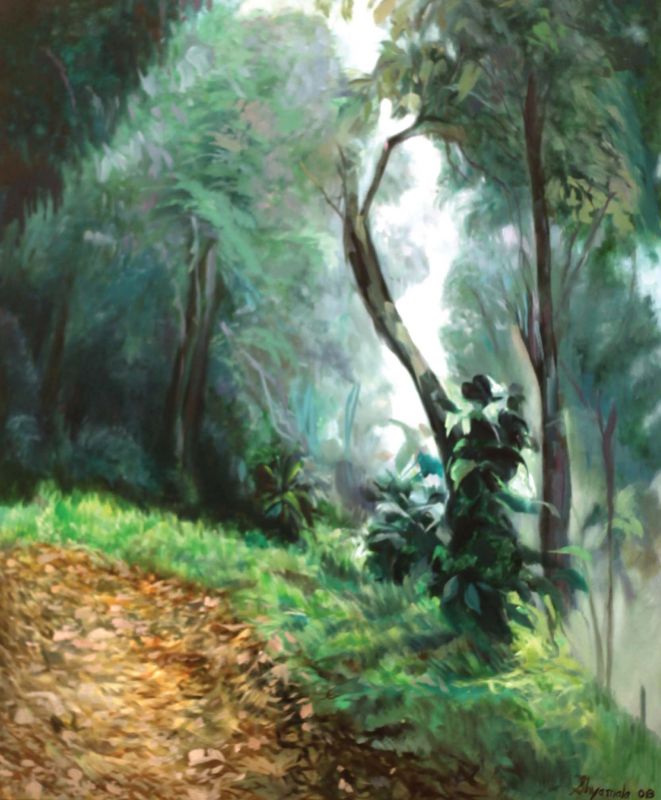 A paiting by Shyamala

The two group shows at Chitrakala Parishath and at Swasti Art Gallery were shows by artists who had a point to prove. The first art show in question is Akanksha, an ongoing show at Chitrakala Parishath which was a tribute to the 150 year legacy of India’s father, Mahatma Gandhi. Over 50 women artists participated in the annual event which aimed at promoting the upcoming female artists.

Shyamala Ramanand curates the show once a year, giving a platform to the women artists who have either just started off and need the much needed push.  Despite the fact that most of the women artists are still in the nascent phases of their careers, what is enthralling to see is the passion that each one of them carries.

For one of the artists, Sunitha Krishna this is her second art show with the group and there seems to be a marked improvement in her works this time around. Her work depicting a stained window and light emanating from it was appreciated by one and all.  Says Shyamala Ramanand “Akanksha has a  proven  agenda of providing women artists, who are self-taught in art, a stable platform to display their works and talent. Not only have these artists been achievers in their own fields of work,  but they also carry enough passion to learn and practice art too.  Akanksha has also been acting as a common ground for like-minded artists to interact, collaborate and also make friendships which last a lifetime.” In today’s day and age where art is much dominanted by contemporary and conceptual art, video art and new media, it is always refreshing to see art shows like Akankhsa which gives a platform for the self-taught artists and it is necessary that even they be given their share of limelight.

The other show was a group show by Nijalingappa halvi and Yallappa Kambli at Swasti Art gallery at HCG foundation. Nijalingappa Halvi is a senior artist from north Karnataka who has specialised  in the art of Abstraction.  Yallappa Kambli in equal measure is extremely talented and he portrays the Buddha and his principles with his serene acrylics with deft use of colour to evoke the peace within. While Nijalingappa specialises in overlapping colours to create a vibrant art experience, but by the use of delicate colours he pays respects to the Buddhist principles. Show  is currently going on at Swasti Art gallery.