Thota Vaikuntam offered his advice to kids at the art fest

Around 3,500 kids attended the fest and were seen communicating their thoughts through paintings. Atika Amjad, founder-director, The Children’s Fine Art Gallery, says, “Our project Art First India introduces art as a curriculum in schools. We are raising awareness about this initiative and also simultaneously hosting an art festival for kids.” 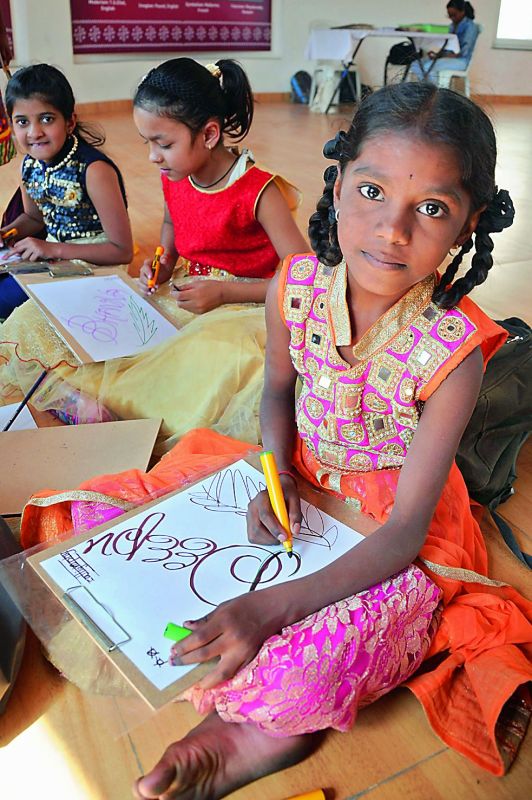 An enthusiastic bunch of kids made this event a memorable one

The fest was a culmination of work done during the entire academic year along with numerous art activities and workshops held over the past few days. Prizes were also distributed. Art enthusiast Anupama, the event’s coordinator says, “During the inspired painting and drawing workshop, kids were inspired by M.F. Husain, Thota Vaikuntam and Raja Ravi Varma’s art. Depending on their age groups, we gave them crayons and poster colours.”

Students from St Francis College for Women and Koti Women’s College also volunteered and helped the kids. Instructors were present at several booths and were seen teaching the kids with passion. In an interesting activity, kids were given photos of Thota Vaikuntam’s work and asked to paint/draw them and also add dialogues to the characters. “We tried our best to paint them the same way. I even won a cash prize,” beams N. Varsha, a class VI student. Another Class VI student, Rajesh, adds, “I drew black and white horses and was shocked that I could draw! I won the first prize too and I am glad that I came to the fest and learnt how to paint so beautifully!”