Virat Kohli has been the flavour this IPL in an edition that has lacked zing. Other than the Kohli tons, there have been other breathtaking performances, both with bat and ball that have come to the fore. Let’s take a look. (Photo: PTI)

AB de Villiers – 129* (55) vs Gujarat Lions: With RCB needed to win to stay in hunt for Play-off, the Bangalore batsman scored his first century in this season IPL and smashed 129* runs in which 10 fours and 12 sixes were present, and along with Kohli he ripped the Lions bowler apart. (Photo: BCCI)

Adam Zampa – 6/19 vs Sunrisers Hyderabad: The Australian spinner had struggled for game time and despite that he had took 11 wickets with only four matches played this season. But when Dhoni elected to play him he didn’t disappoint. Against Sunrisers Hyderabad he took 6 wickets for only 19 runs and made Dhoni realise why he didn’t play him earlier. (Photo: BCCI)

Gautam Gambhir – 90* (60) vs Sunrisers Hyderabad: The Kolkata Knight Riders captain has been their leading run getter in this season IPL. His innings of 90* runs against Sunrisers in which 13 fours and a six were there. (Photo: BCCI)

Bhuvneshwar Kumar – 4/29 vs Gujarat Lions: Sunrisers Hyderabad seamer picked up four wickets for 29 runs and helped his team to restrict Gujarat at 135. Kumar is the second highest wicket taker in this season of IPL with 16 wickets. (Photo: BCCI)

Krunal Pandya – 86 (37) and 2/15 vs Delhi Daredevils: The decision of Rohit Sharma to send Krunal Pandya raised everyone eye brows at that time, with his all-round performance of 86 runs in 37 balls with seven fours and six sixes and two wickets for fifteen runs and won his team by 80 runs, it looked the decision Rohit took to send him was the right. (Photo: BCCI)

Chris Jordan – 4/11 vs Gujarat Lions: The England pacer was signed very late for RCB and he showed the team which was lacking a fast bowler due to injury of Mitchell Starc. His bowling against Gujarat in which he took 4 wickets and gave 11 runs in four overs and his team won the game with mammoth of 144 runs. (Photo: BCCI)

David Warner – 92 (50) vs Royal Challengers Bangalore: The Hyderabad skipper was always seen as a hard hitter of a ball. His innings of 92 against RCB that seen nine fours and five sixes saw his team won the game by 15 runs. (Photo: BCCI)

Mustafizur Rahman – 3/16 vs Mumbai Indians: The Sunrisers Hyderabad bowler bowl one of his best spells in IPL this season against MI. The batsman of Mumbai struggled to play him and were dethroned by him and that saw them loose a match by 85 runs. (Photo: BCCI)

Virat Kohli - 113 (50) vs Kings XI Punjab: Royal Challengers Bangalore skipper and star batsman has been in form of his life this year IPL. With only 15 overs were scheduled to play due to rain, he scored 113 runs against Punjab and that too in 50 balls which included 12 fours and eight sixes and is the highest runs getter in this season IPL with 865 runs in 13 innings. (Photo: BCCI)
Tags: virat kohli, indian premier league, ab de villiers, david warner, gautam gambhir 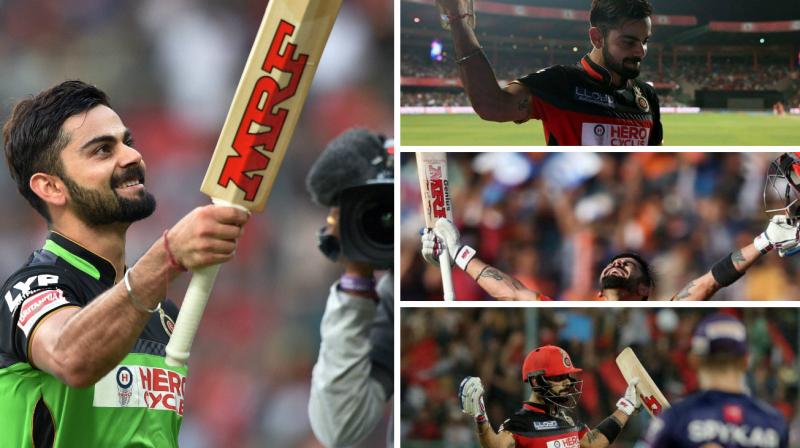