Salman Khan and his team dazzled with their performances during the Da-Bangg Tour concerts held in USA on Friday and Saturday. (Photos: Instagram/ thejaevents)

Singer Guru Randhawa, who is known for hits like ‘Suit Suit Karda’, was one of the performers at the event and shared this picture on Instagram.

Kamaal Khan, who is the voice behind Salman’s evergreen track ‘O O Jaane Jaana', also performed at the event.

Prabhudeva is known as Indian Michael Jackson and the actor-director proved it once again with his attire and dance moves.

Daisy Shah is another member of the team and looked stylish in denim jacket and shorts during the performance.

Katrina Kaif looked amazing dressed in golden and black, putting up an enthralling act filled with energetic moves on the stage.

The actress also wore denim dungarees for one of the other acts and her fashion and moves both were a treat for the audience.

She also dazzled in a red hot outfit during the performance. The actress doesn’t have any shortage of hit tracks, most of which played and added to her act.

Jacqueline Fernandez was among the star performers of the evening, dressed from head to toe in dark green and blue hues.

Her other outfit during one of the acts was also similar, just that she replaced her attire with golden but looked stunning nonetheless.

Sonakshi Sinha entertained the audiences dressed in black and golden and displayed some of her energetic moves.

She added denim jacket and jeans to her attire later on and had Salman’s various characters in movies for company.

She also grooved with Maniesh and soon-to-be 'Dabangg’ director Prabhudeva, and set the stage on fire.

The man behind the concert, Salman Khan made a stylish entry during his performance in an all-black attire.

The superstar’s fan following worldwide knows no bounds and it was a visual extravaganza for his die-hard fans.

Salman put up a romantic act with his leading ladies, his ‘Race 3’ co-star Jacqueline experience a bit of his love.

The superstar has been close to his ‘Jai Ho’, and ‘Race 3’ co-star Daisy Shah since many years and he didn’t mind going down on his knees for her.

You remember the moustached and saree-clad Dabangg duo, but Salman and Sonakshi show electrifying chemistry even without it.

Salman’s chemistry with Katrina is considered is among his best of all time, something they proved again with their performance.

If all the separate acts were entertaining, just imagine how many fireworks all of them together set on the stage.
Tags: salman khan, da-bangg tour, katrina kaif, jacqueline fernandez, sonakshi sinha 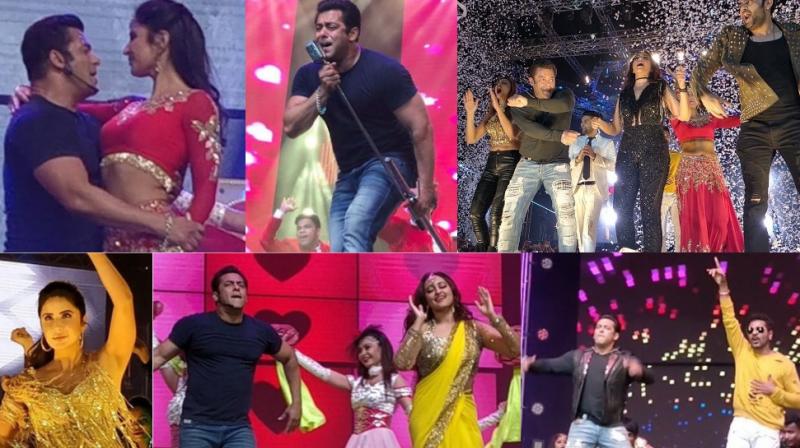 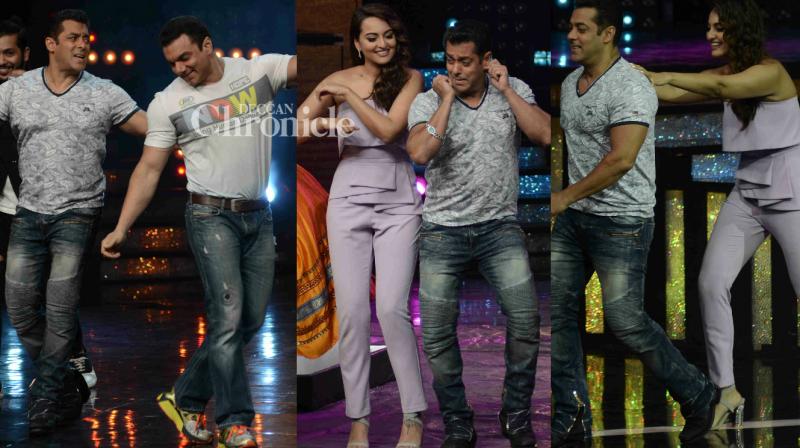 Salman reunites with his 'Dabangg' girl Sonakshi on Nach Baliye