Thank god, celebrities stepped out, is what paparazzi thought as they snapped them at various locations in Mumbai on Wednesday. (Photos: Viral Bhayani)

Sush keeping it hush-hush? Sushmita Sen was once again seen with a young and handsome man with her at the airport.

Wait, Ayushmann Khurrana doesn’t like being told ‘Badhaai Ho’ for his mother’s pregnancy in the film? But here he and co-star Sanya Malhotra came all decked up to celebrate at an event.

Badhaai Ho, expectant mothers: The team of the film invited real pregnant mothers from across the country and their ‘Godh Bharai’ or baby shower was celebrated.

United we stand: The director of the film, Amit Sharma and Priti Shahani of Junglee Pictures were also present at the event.

This National Award-winning actor is Kajol’s son. We’re only talking about on screen as he’s the lead actor of ‘Helicopter Eela’ and was present at a screening.

Raising oomph and how: Rhea Chakraborty came out in style for a promotional event for her film ‘Jalebi’ of Vishesh Films.

Do you believe in the supernatural? Then you should surely watch ‘Tummbad’, which stars Sohum Shah in the lead.

Start of Navratri will end with ‘Namaste England’: The leads of the Dussehera release, Arjun Kapoor and Parineeti Chopra, had promotional duties as the festival kicked off.

I’m a busy man, paps: Ranveer Singh smiled but didn’t pose for the cameras as he arrived at Farhan Akhtar’s house.

Breezy and easy: Kangana Ranaut had the wind for company as she arrived at the airport for her journey.

Wait some more time: Rakul Preet Singh’s first look as Sridevi was shared on the day, but we’ll have to wait more for Vidya Balan’s look as the actress was seen outside a dubbing studio in Juhu.

Long getaway? Looking at the size of Taapsee Pannu’s travel bag at the airport makes us feel she’s going for a much-needed holiday.

Chalo Dilli: Sonakshi Sinha smiled for the cameras at the airport as she headed to the capital for a fashion event.

Happy to see you: ‘Fanney Khan’ actor Anil Kapoor had a smile on his face on his way out after attending an event.

Gearing up to be the Student of the Year: Ananya Panday, who will make her debut with the second instalment of the franchise, snapped outside her gym in Bandra.

She’s all work, I also indulge in play: The other actress from the film, Tara Sutaria, watched a movie at a multiplex in Juhu.

How was the journey, Sussanne Khan? The interior designer was seen making her way out of the airport.

Excited about meeting the paps or the journey? Nushrat Bharucha all smiles for the cameras at the airport.

Aditi Rao Hydari, can you tell us the secret of this restaurant in Bandra? Why celebrities loving coming to this place so much?

They’re from Kashi and Sharman Joshi is in search of his sister. We’re only talking about the plot of ‘Kashi’, which also stars Aishwarya Devan and the lead pair was seen during promotions.

Unlikely combination but beautiful nonetheless: Soha Ali Khan and Shriya Saran were seen at an event for a medical brand.

Long time, no see: We spotted ‘Milan Talkies’ actor Ali Fazal after a while as he had a meal at a restaurant in Bandra. 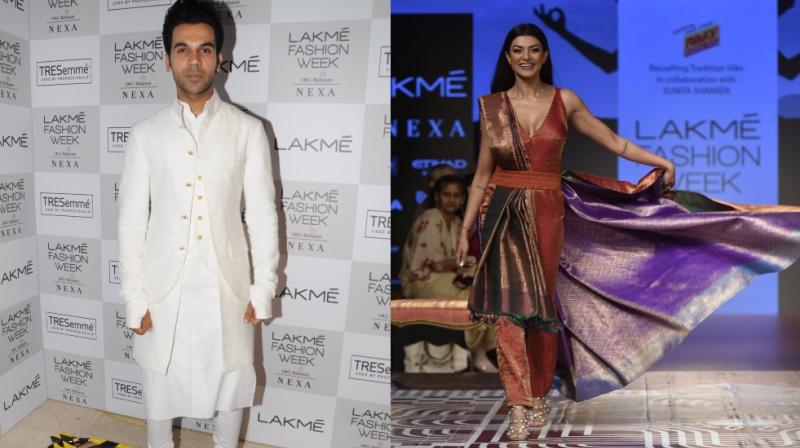 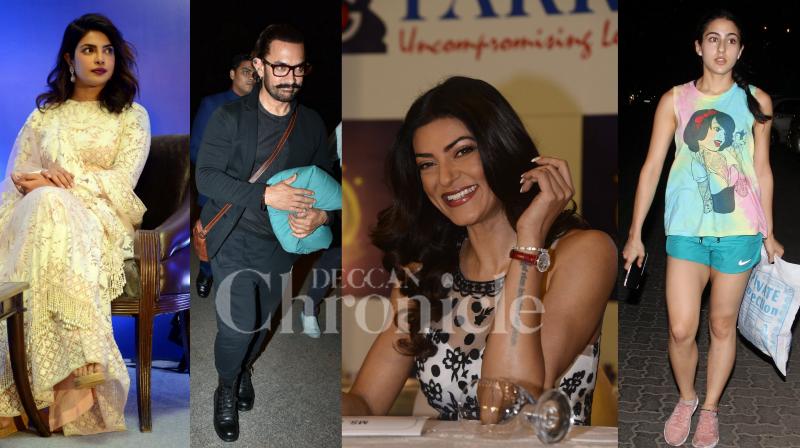 Clicked: Priyanka, Sushmita at event and Aamir, Sara spotted in the city