B-Town stars stepped out for professional and personal reasons in Mumbai on Sunday and were snapped by the paparazzi. (Photos: Viral Bhayani)

Shah Rukh Khan and his ‘Zero’ director Aanand L Rai were snapped with Karuna Badwal, who has co-produced some of his films, at her residence in Andheri for her birthday.

Later in the day, the superstar was seen with daughter Suhana as they arrived at the airport to reportedly head to London, where the latter studies.

While SRK is known for his style, this time it was Suhana who grabbed eyeballs in a tank top, checkered shirt and jeggings.

The star kid is already popular on social media, with rumours of a debut, most probably backed by Karan Johar, often being reported.

‘Stree’ pair, lead actress Shraddha Kapoor and producer Dinesh Vijan, seem to have had an enjoyable dinner together in Bandra.

The actress was all giggles while posing for the cameras and we wonder what exactly was the joke they shared on their way out.

Their film has shocked the industry with outstanding collections, inching close to the 100-crore mark and achieving blockbuster success.

After a vacation in Maldives, Kareena Kapoor Khan and son Taimur have returned to the city and were seen arriving at Karisma Kapoor’s house.

The little one has now started recognising the camera persons who he sees outside his house, play school and almost everywhere.

This time, it was not his favourite horse toy, but a bar of chocolate that he firmly held in his hands while meeting his aunt.

Mahesh Bhatt seemed excited at a concert held to launch ‘Jalebi’, the next venture from the family's Vishesh Films banner.

The film stars MTV fame Rhea Chakraborty and Varun Mitra, who translated their onscreen chemistry on the stage too.

The two actors made some of the fans’ day by getting them on stage and showing them love, with singer Jubin Nautiyal’s voice in the background.

Aamir Khan, who is gearing up for his next film ‘Thugs of Hindostan’, was clicked post a salon session in Juhu.

Ayushmann Khurrana, who recently unveiled the trailer of his thriller ‘Andhadhun’, was also snapped.

Rakul Preet Singh, who is currently working on ‘De De Pyaar De’ opposite Ajay Devgn, poses for the cameras outside a Juhu restaurant.

Shruti Haasan, who was seen with mother Sarika a day before, had glasses on as she arrived at the airport for her journey.

Mouni Roy, who recently starred in ‘Gold’ and will also work in ‘ Made in China’ and ‘RAW’, was spotted at the airport.

Yami Gautam, who will next be seen in ‘Batti Gul Meter Chalu’, was also seen making her way to the airport.

Soha Ali Khan and Kunal Kemmu’s daughter Inaaya Naumi Kemmu seems to be wondering why the paps are clicking her in Khar.

No, Jackky Bhagnani has not joined the cleaning department of the BMC, he was snapped shooting for a short film in Bandra.

South actress Vedhika, who will be seen in Emraan Hashmi’s thriller ‘The Body’, was snapped at the airport.

Sohail Khan’s son Nirvaan Khan was also among the other known faces seen making their way to the venue. 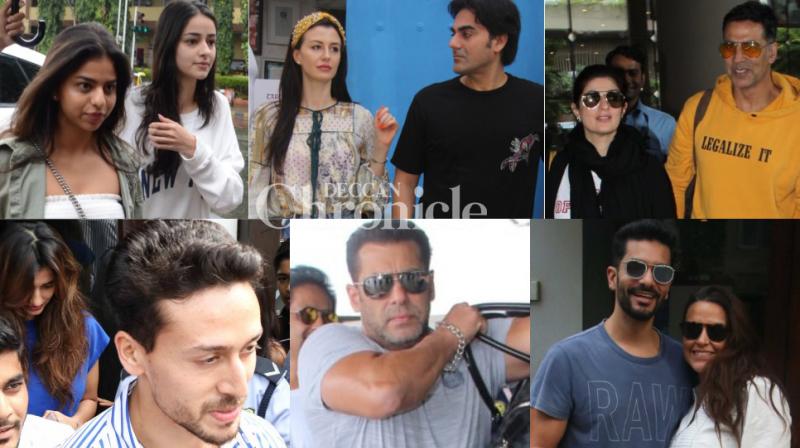 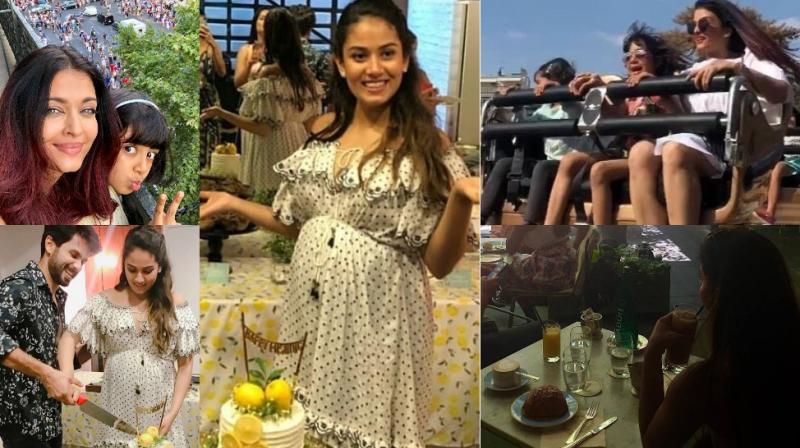