B-Town stars went about their activities around the country and were snapped in Delhi, Kolkata and Mumbai on Thursday. (Photos: Viral Bhayani)

Akshay Kumar and Mouni Roy, who play a Bengali couple in their upcoming ‘Gold’, promoted their film in Kolkata.

John Abraham and Manoj Bajpyee, who are pitted against each other in ‘Satyamev Jayate’, took their film to New Delhi.

They were accompanied by their co-star Aisha Sharma and Bhushan Kumar, who is one of the producers of the film.

Back home in Mumbai, Sonakshi Sinha promoted her upcoming film ‘Happy Phirr Bhag Jayegi’ by putting on her running shoes.

The first Happy, Diana Penty, who is also a part of the second film, was also spotted during the promotions.

The director of the film, Mudassar Aziz and Jassie Gill, who makes his Bolllywood debut with the venture, were also seen.

Taapsee Pannu stepped out with her boyfriend, Denmark badminton player Mathias Boe, for lunch in Andheri.

The other couple who stepped out together was Tiger Shroff and Disha Patani, who had meal together at a Bandra restaurant.

Varun Dhawan, who is gearing up for ‘Sui Dhaaga’ release, was surrounded by fans for selfies after his workout session.

Salman Khan, who has started shooting for his next film ‘Bharat’, was seen arriving at the airport for his journey.

He was accompanied by his sister Alvira Khan, mother Salma Khan and brother-in-law Atul Agnihotri.

Ajay Devgn, who was seen in ‘Raid’ earlier this year, was also among the other celebrities flying out of the city.

Alia Bhatt, who has signed another Karan Johar production, ‘Takht’, was seen at the airport before heading to London.

Sara Ali Khan, who will be seen in two films later this year, was all smiles with the paparazzi post yoga classes in Bandra.

Kiara Advani, who is currently in the news for link-up with Sidharth Malhotra, had dinner at a Bandra Kurla Complex restaurant.

Malaika Arora Khan smiles for the shutterbugs on arrival at the airport before her journey.

Chunky Panday’s daughter Ananya Panday, who will be seen in 'Student of the Year 2', acknowledged the cameras after her session at a gym.

Yami Gautam, who will be seen in ‘Batti Gul Meter Chalu’ next, was seen with sister Surilee exiting the airport.

Kailash Kher was in his ‘Bam Lahiri’ mode with the ‘Damroo’ at a beauty pageant held in the capital city.
Tags: taapsee pannu, mathias boe, taimur ali khan 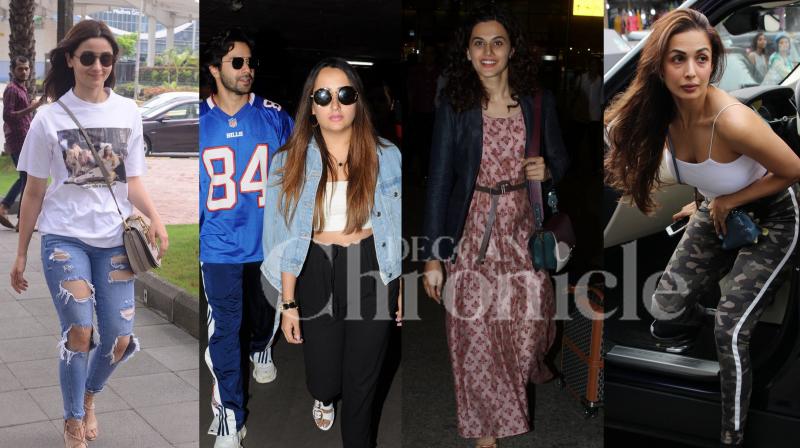 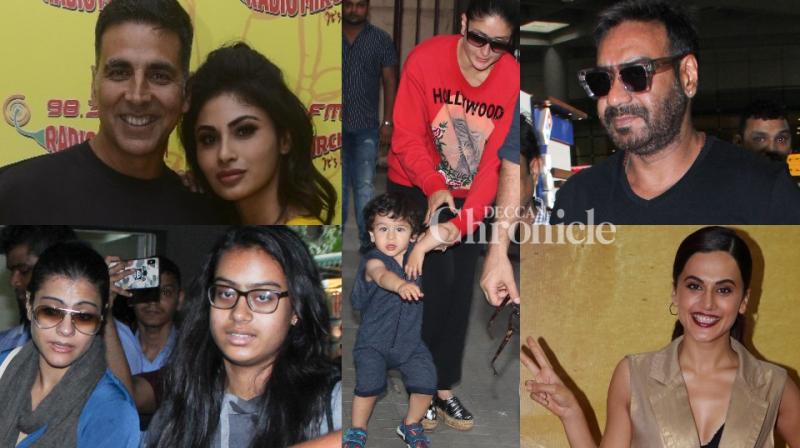