Former actor and filmmaker Rakesh Roshan celebrated his birthday late Wednesday by throwing a bash for friends and family in Mumbai. His son Hrithik, Rekha and other stars were spotted at the restaurant. (Photo: Viral Bhayani)

Rakesh Roshan poses with his wife Pinky Roshan outside the restaurant. The veteran filmmaker turned 68 years old on 6 September.

Rekha was one of the star attractions at the bash in her trademark saree. The veteran actress has been directed by Rakesh Roshan in several films.

Hrithi Roshan snapped while exiting the restaurant. He has worked in several films directed and produced by his father Rakesh Roshan.

Harbhajan Singh, wife, former actress Geeta Basra and their daughter Hinaya were also among the guests at the bash. Despite his cricketing skills, Harbhajan has always been linked to entertainment industry, participating in reality shows and much more.

Rishi and Neetu Kapoor looked great together as they arrived for the bash. The former was in the news recently when he was booked for sharing an objectionable picture of a minor child.

Jeetendra arrived for the bash with his wife Shobha. The actor had shared screen space with Rakesh Roshan in several films.

Sonu Nigam arrived for the bash with his wife Madhurima. The singer has lent his voice for several of Rakesh and Hrithik Roshan's films.

Adnan Sami was dressed in traditional wear as he got snapped outside the restaurant. The singer-musician has also turned an actor recently.

Yami Gautam was all smiles while posing for the cameras. The actress featured opposite Hrithik in Rakesh Roshan's production 'Kaabil.'

'Kaabil' director Sanjay Gupta and one of the actors in the film Rohit Roy were also spotted. Gupta's wife Anu also joined in the fun.

Karishma Tanna came out in style for the bash. While the actress is busy with projects on TV, she will also be seen in Sanjay Dutt's biopic releasing next year.
Tags: rakesh roshan, hrithik roshan, actress rekha, harbhajan singh 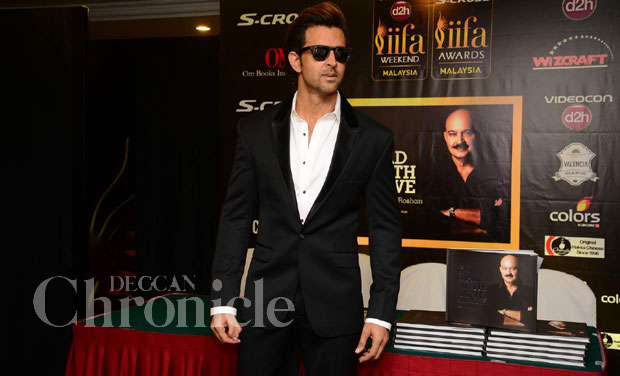