Legendary actor-filmmaker Raj Kapoor’s wife Krishna Raj Kapoor passed away on Monday and along with members of the Kapoor family, several stars were seen arriving at her residence in Mumbai and at the funeral. (Photos: Viral Bhayani)

Rajiv Kapoor is one of Raj and Krishna Raj Kapoor’s children, along with Rishi Kapoor, Randhir Kapoor, Ritu Nanda and Rima Jain.

Not just the family members, other celebrities were also seen, like Kajol, along with Sanjay and Maheep Kapoor.

Rani Mukerji has worked with most of the Kapoor celebrities like Ranbir Kapoor, Kareena Kapoor Khan and Rishi Kapoor.

Amitabh Bachchan arrived with daughter Shweta Bachchan Nanda to console the members of the Kapoor family.

Amitabh Bachchan’s son Abhishek Bachchan, who was seen in ‘Manmarziyaan’ recently, was snapped on the way to pay his last respects.

Aishwarya Rai Bachchan, who had even acted in a RK Studios film ‘Aa Ab Laut Chale’, was seen making her way to the residence.

Aamir Khan, who is sporting a new look currently, and his wife, filmmaker Kiran Rao were among the celebrities seen at the venue.

Amid the good collections in the opening weekend for his recent film ‘Sui Dhaaga: Made in China’, Varun Dhawan had a bad news to experience as well.

Her father Anil Kapoor has worked with almost all the Kapoor celebrities, like Karisma, Kareena, Rishi Kapoor, among others.

Tabu, who will next be seen in Sriram Raghavan’s ‘AndhaDhun’ opposite Ayushmann Khurrana, was also among the stars seen at the venue.

Tributes have been pouring in for Krishna Raj Kapoor since morning and most of them spoke about her beauty, among other qualities.

Kareena Kapoor Khan guides her father Randhir Kapoor as he readies for his mother’s final journey.

Randhir Kapoor seemed inconsolable as brother Rajiv Kapoor and other well-wishers carry their mother’s mortal remains for the last rites.

Krishna Raj Kapoor’s grandson Armaan Jain, his father Manoj Jain and businessman Anil Ambani can be seen in this picture.

Krishna Raj Kapoor was 87 years old when she passed away due to a cardiac arrest at 5 am on Monday.

Karan Johar guides Alia Bhatt, who will reportedly be a part of the Kapoor family soon, at the crematorium along with Ayan Mukerji.

One of Krishna Raj Kapoor’s daughters Rima Jain, being guided by her sons, Aadar and Armaan Jain to the crematorium.

Arjun Kapoor had a loss of his own, stepmother Sridevi’s death earlier this year and he’ll be able to understand what the family is going through.

Kareena Kapoor Khan and her father Randhir Kapoor during recitation of the prayers before the start of the cremation process.

Randhir and Rajiv Kapoor perform the rituals before the cremation. Their brother Rishi Kapoor was in USA for medical treatment and has not arrived yet. 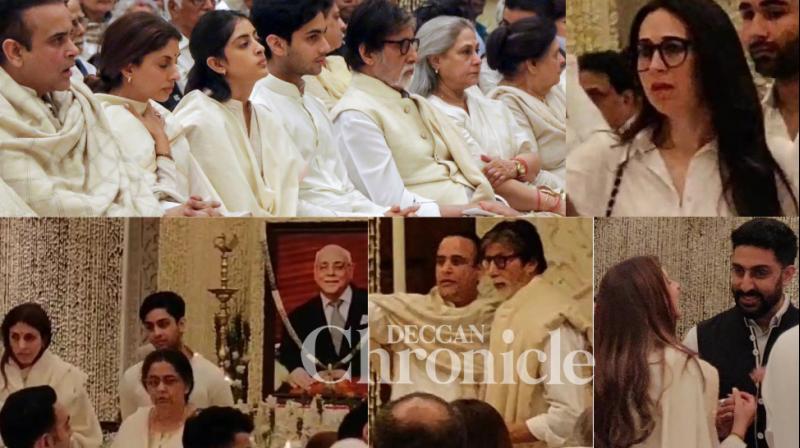 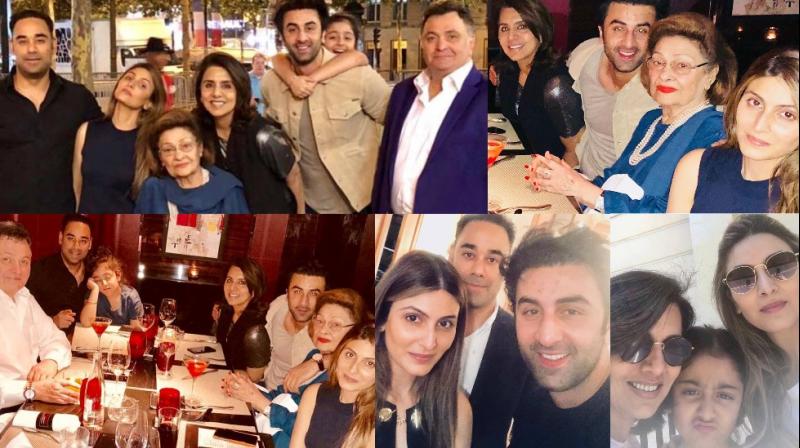