Sirisha Bandla, Virgin Galactic's Vice President of Government Affairs and Research Operations, and one of the passengers accompanying Richard Branson, waves to the crowd before heading to board the rocket plane that will fly them to space from Spaceport America near Truth or Consequences, New Mexico. (Photo: AP)

Hyderabad: Sirisha Bandla, 34-year-old aeronautical engineer, is one among the 5 astronauts to fly into space with billionaire Richard Branson on board Virgin Galactic's SpaceShipTwo Unity.

Bandla is also the third Indian-origin woman to head to space after Kalpana Chawla and Sunita Williams.

Born in Andhra Pradesh's Guntur and brought up in Houston, Texas, Bandla will join Branson and four others to make a journey to the space from New Mexico.

"I really didn't need to tweet this since my friends flooded the feed yesterday with itRed heartI was overwhelmed (in a good way!) by messages of love, unrecognizable capital text, and positivity yesterday. Slowly working my way through them...one platform at a time!" she added. 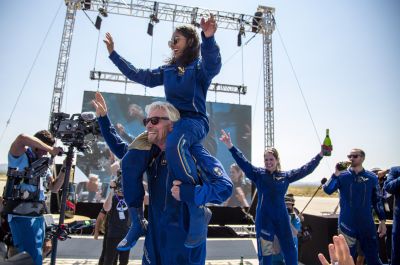 Bandla will be astronaut no 004 and her flight role will be Researcher Experience, according to her profile on Virgin Galactic.

"When I first heard that I was getting this opportunity, it was just. I think that that probably captured it very well, I was speechless. This is an incredible opportunity to get people from different backgrounds, different geographies and different communities into space," she said in a video posted on Virgin Galactic Twitter on July 6.

Speaking about the experience, Bandla said it was "incredible" and "life-changing" experience to see Earth from space.

"I am kind of still up there but it's so glad to be here. I was trying to think about a better word than incredible but that is the only word that can come to my mind... Seeing the view of Earth is so life-changing but also the boost the rocket motor kicking in. The whole trip to space and back is just amazing, Bandla told the NBC News in an interview.

Bandla described the moment as emotional and said, "I have been dreaming of going to space since I was young and literally it is a dream come true."

"I have wanted to be an astronaut but I wasn't able to go in the traditional National Aeronautics and Space Administration (NASA) role and I took a very unconventional way to go to space and I do believe that a lot of people are going to be able to experience this and that's why we are here," she added. 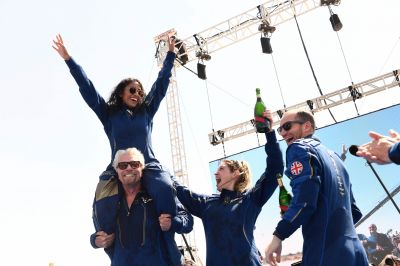 Virgin Galactic founder Sir Richard Branson(L), with Sirisha Bandla on his shoulders, cheers with crew members after flying into space aboard a Virgin Galactic vessel, a voyage he described as the "experience of a lifetime" -- and one he hopes will usher in an era of lucrative space tourism. Spaceport America, near Truth and Consequences, New Mexico. (Photo: AP)

On being asked if this was just a joyride for rich people, she said, "As Virgin Galactic builds up...this is VSS Unity's ride to space today but we have got two more spaceships in the manufacture and we hope the cost would come down."

Virgin Galactic  — the business Branson started in 2004  — aims to fly private citizens to the edge of space. The trips are designed to permit passengers to experience three to four minutes of weightlessness and observe the curvature of Earth.

The four mission specialists evaluated different experiences that Virgin Galactic has promised its future customers, many of whom have already reserved trips to space with the company at USD 250,000 a seat.

‘Afghanistan has changed, women will fight back’

Lekha Shankar | The new ‘Samui Plus’ programme in Thailand

‘Afghanistan has changed, women will fight back’

Lekha Shankar | The new ‘Samui Plus’ programme in Thailand

Words of a gay poet, as old as India’s Independence, heal