DECCAN CHRONICLE. | SURESH KAVIRAYANI
Published Jan 30, 2017, 12:00 am IST
Updated Jan 30, 2017, 6:23 am IST
Every other Telugu film is either an official remake of a hit from other language or lifts from English films and World Cinema.

A few days ago, legendary  playback singer S.P. Balasubramanyam criticised Telugu movies for their lack of nativity and originality. He requested filmmakers and stars to make films that would inspire Telugu people and the nation.

It’s true. Every other Telugu film is either an official remake of a hit from other language or lifts from English films and World Cinema.

This phenomenon is not new — the practice dates back to the 1980s and some of the top directors have been guilty of it. The difference is, earlier, even if the filmmakers were inspired by other language films, they worked on the nativity. Back then, films based on Telugu novels were successful too. In the last few years, the West has been a major influencer.

Will this change?
“In the Telugu states, since the rate of literacy was low, our filmmakers depended on the regular, hit formulas to churn out films. Now that people are more educated, they don’t mind watching folk, historic and family subjects,” says Gunasekhar, who produced and directed the historic film Rudhrama-devi.

“When I shared the subject with a few producers, they rejected it saying people don’t watch historic subjects. That’s why I decided to produce the film myself,” he informs, adding further, “With Gautamiputra Satakarni being a success, I am confident that Telugu cinema is slowly inclining towards nativity and coming up with more historic and local subjects,” feels Gunasekhar. Interestingly, the director is coming up with two projects Hiranyakasipa and Prataparudrudu based on mythology and history.

Playing safe
Telugu cinema depends heavily on the “success mantra”. If a horror comedy is successful, everyone makes a film in the same genre. In the last few years, half the films made were horror comedy.

“The audience never tells you what kind of films they want. If you make a good film, they’ll watch it. It’s the producers who feel if they are putting in money, the film must get returns — so they don’t want to take any risk. Only a rare breed of producers give importance to a good story.

“The shift may not happen immediately, but it will change soon,” feels Satish Vegnesa, director of Shatamanam Bhavati . 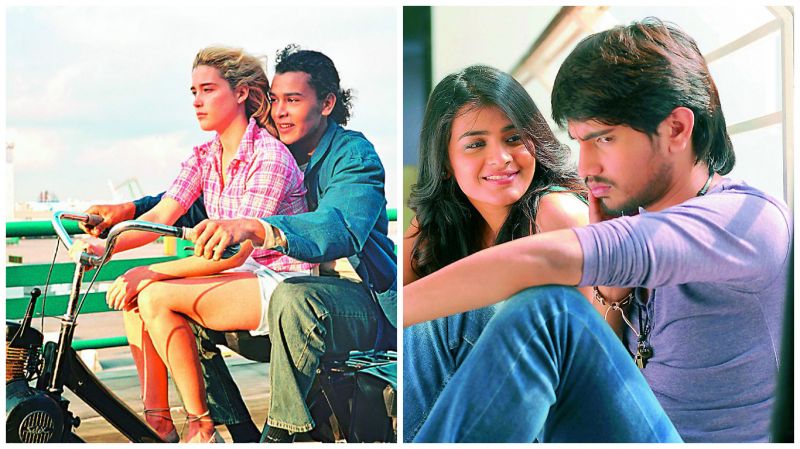 Remade: Kumari 21F (right) was said to be a copy of the French film Lila Says(Left)

“Most of the top stars want to act in the typical action entertainers, so the directors have to oblige. It’s not only the directors but the stars too should come forward and agree to do a different genre, that’s when the writers can think of original subject that suits the local nativity,” adds Gunasekhar.

Different league
Meanwhile directors like Rajamouli have proved that if a film is interesting, it will be a success irrespective of the genre. He made Baahubali in a folk backdrop and the film was a nationwide rage. Films like Rudhramadevi and Guatamiputra Satakarni have followed. Last year Soggade Chinni Nayana too was successful — it had a local flavour and nativity.

In one of his interviews, Rana Daggubati said that Baahubali is the inspiration for him to do the underwater war film Ghazi. He said, “This film is definitely a different genre and we believe in the subject. The audience doesn’t expect this kind of film in Telugu — it is the first war-at-sea film in India and I hope it paves way for others to come up with more subjects like this.” The film is based on the true incident that happened in the India-Pakistan 1971 war where the Indian Naval forces attacks the Pakistani ship Ghazi.

“If you look at history or read our literature, there are so many stories but when we make a film from it, there are many waiting to criticise. Instead, appreciating it will give others a chance to come up with more films on different genres,” reflects Krish.

A good sign is that after the success of Baahubali, Rudhramadevi and Gautamiputra Satakarni, megastar Chiranjeevi too is also planning to come up with a film that reflects history. His 151st film is based on the life of freedom fighter Uyyalavada Narasimha Reddy. Looks like other filmmakers and stars too may follow suit.

Copy+paste
A list of Some of the films, new and old, that are copies of other movies

Mee Sreyobhilashi from Ikinai (Japanese)
Endukante Premanta from Just Like Heaven
Pilla Zamindar from A Millionaire’s First Love (South Korean)
Bruce Lee — The Fighter from The Valet (French)
Ghajini from Memento
Pape Naa Pranam from Nick of Time
Robo (Enthiran) from Making Mr Right
Criminal from Fugitive
Khaidi from Rambo
Anthapuram from Not Without My Daughter
Stalin from Pay It Forward
Sarrainodu from Walking Tall
Mrugaraju from The Ghost and the Darkness
Inspired: Chiru’s Stalin was a copy of Pay It Forward

Tom Hanks, Rita Wilson return to US after coronavirus quarantine in Australia

Superstar Chiranjeevi requests everyone to participate in 'Janata curfew'

Prabhas in self-quarantine after Jaan shoot in Georgia