Disbanded film studios are back in business

Prabhas, Rana and Rajamouli on the sets of 'Baahubali'

After being almost disbanded for over a decade, the T-town film studios are returning to prominence among filmmakers, who now prefer to shoot their films indoors.

The outdoor and overseas locations will not be considered till Covid-19 has a vaccine. 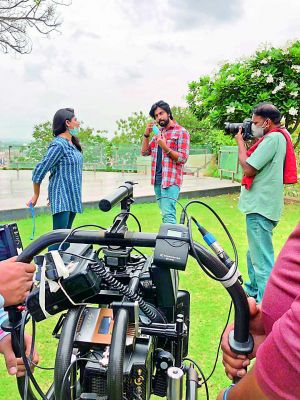 New-age director Gopichand Malineni, who is set to resume shooting of his big-ticket movie Krack, with Ravi Teja and Shruti Haasan in August, admits that studios will certainly be brimming with activity once again as even he has learnt that few filmmakers are considering shooting in studios.

“Firstly, for the moment, studios are safe and secure places to work in. If we had to shoot even crowd scenes, we will not only have better control in the studios but also ensure the all the safety measures with regards to the pandemic,” he explains.

“Besides, in the studios, we can erect or re-create locations to suit our needs. So we can erect road scenes within the four walls of a studio without crowds and fans disturbing the stars.”

Although Hyderabad boasts the best of studios such as Ramoji Film City, Annapoorna Studios, Padmalaya, Ramanaidu Studios, Sarathi Studios and Ramakrishna studios, most of them suffered mounting losses while few others shut shop due to lack of income. 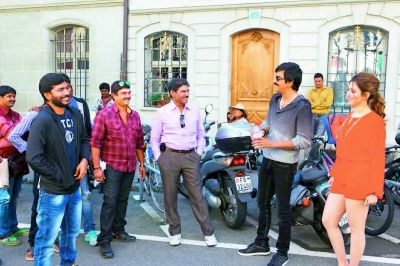 Ravi Teja on the sets of 'Bengal Tiger'

Still others let out their space for TV reality shows while news is that another big studio is considering turning into a reality hub.

So close and yet unused

Producer-director Teja agrees that studios had lost their sheen owing to messy gardens, police stations and roads. “When I walk into a studio, my creative interest is dented as the space wears a seen-it-all-before look,” he elaborates.

“To avoid that, every year, the legendary Nagi Reddy garu of Vauhini Studios used to relay the gardens and parks and sprucing up the police stations and roads in the studio to give fresh locations to filmmakers, but now such re-designing does not happen.”

Teja then points out to us why the practice stopped. “Unfortunately, even studio owners are catering to ten to fifteen star-centric movies instead of sixty to seventy odd medium- and small-range movies. For instance, if a producer has to shoot in a police station, first he has to repair it and then begin shooting. Besides big producers, others can’t afford it, so it has pushed out good number of film shootings outdoors,” he explains.

In addition, Teja claims that while a few studios have been thriving on TV reality shows and another one lends itself to Hindi and Tamil movies, now Telugu films will restart their shoots here too. “In a way, the safety guidelines are a blessing in disguise, and studio owners will heave a sigh of relief,” he chips in. 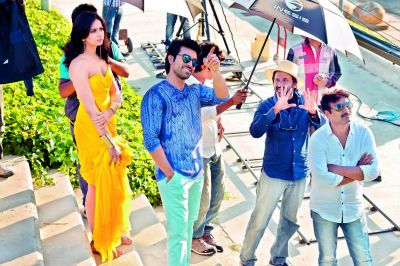 Ram Charan on the sets of 'Bruce Lee'

Back to the basics

Another director Sampath Nandi, who has shot in exotic locales in Europe, Bangkok, Dubai and China for his films, is also compelled to return to a film studio to complete his next film Seeti Maar with Gopichand and Tamannaah.

“Our first priority is safety of stars and crew members. Hence, we are planning to start shoot from August in a village set in a city studio,” says the director. But Sampath also tells us that he had even explored varied locations in the past.

“Our film Rachcha was the first movie to be shot in China as we filmed an action episode in the Anji bamboo forests. Star-studded films demand virgin locales and visually pleasing spots. Also personally, I like to expand my visual imagination,” he concludes.