Vijay Devarakonda’s upcoming film Arjun Reddy which releases this Friday, has already been sold to full houses. The film is also in the news as senior politician V. Hanumantha Rao objected to the posters of the film, which show the lead pair in a lip lock. “The story is inspired from real-life incidents that happened in a medical college. Director Sandeep studied medicine and witnessed quite a few incidents to which we added a few fictional scenes,” explains Vijay.

Talking about the scene, he says that the story is about Arjun Reddy and his journey through life. “It’s a love story and when he is in a relationship, he wants to show his affection, so he has shown it through a kiss. There’s nothing wrong in it as it just shows affection. I don’t understand why people say it is vulgar or obscene or B-grade. If I love my girlfriend, I want to kiss her, which is completely alright as it shows the emotion,” says Vijay. 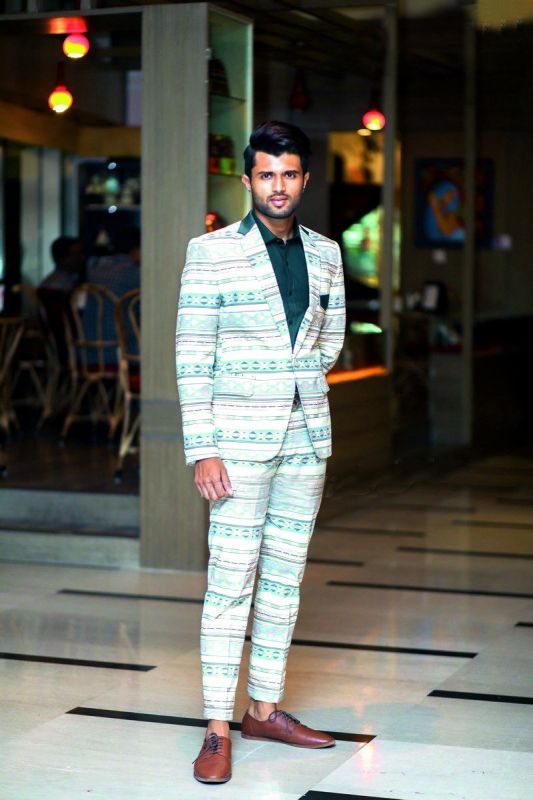 He continues, “Nowadays, men on the street and people in politics are fighting with each other, sometimes using unparliamentary language and abusing each other verbally, but we are so used to it that we never react or object to those incidents. Yet,  for some people, a kiss is vulgar. I posed the same question when people sent messages to me, but I didn’t get a reply from them.” The actor adds that there are bigger issues to solve than this.

“He (Hanumantha Rao) is an elderly person and I don’t want to comment on him. But there are bigger problems in society and it is better to address them instead of this tiny one. This poster does not affect anyone’s lives. The film is censored and has been shown to people over 18 years of age. There is absolutely no problem,” explains the actor.

The film started almost a year ago, but is hitting the screens only this Friday. “The delay is because of my look,” reveals Vijay, and adds, “The role needed a beard and hair to be grown, so I waited for two months for that. Meanwhile, I was working on my other film and they wanted me to be clean shaven, so I removed the beard, only to grow it back again, hence the delay.”

The actor adds, “We shot some scenes in Italy, Mangalore and in Hyderabad. We wanted the film to have a real-life ambience, so a team went to all the places where we shot and recorded the sounds of the surroundings to create the same ambience.”

Vijay is busy with multiple projects. “I never expected that I would be so busy. Cinema is my passion and I never planned anything. I just choose the right script,” he says, modestly.

Talking about his remuneration, the actor shares, “I never demand any amount. After Pelli Choopulu, it’s the producers who were offering me more remuneration. I recently bought a house for my parents and they are happy too.”

Vijay feels happy working with debutant directors. “It’s always fun working with directors of my age group. My first priority is the story. In my upcoming films, I am working with a couple of debutants,” he concludes.

Hamsa Nandini opens up about her cancer diagnosis