Jr NTR’s upcoming film Jai Lava Kusa, will see the actor in triple roles, one of which has stayed with him even after wrapping up the shoot. Apparently, playing Jai, the negative character who stutters in the action-drama, is giving Jr NTR some serious sleep issues — the 34-year-old actor has been waking up at night, standing at the window and talking to himself.

“Why does the censor board object to excessive violence and blood? Why do they want to put a statutory warning while smoking and alcohol scenes are shown on screen? Because those are influencing the audience! So I believe that the impact of the character is definitely experienced by an actor,” he explains.

The actor then goes on to add that the situation also depends on an actor and his or her mental state.

Family to the rescue
So, how does an actor, like himself, come out of such a phase? Crediting his family for helping him come out of the post-shoot turmoil, the actor says, “I spend time with my family, I cook and listen to music. This time, luckily, I have a reality show which I am hosting and it actually helps me a lot. Because when I host, I can’t act; I behave like myself in real life,” he states.

Talking about his son Abhay, Jr NTR says, “He is now growing up and wants to go out for drives and eat outside food. Most of the time Pranathi (his wife) and I argue about Abhay’s education and about how to make him a better person.”

“I tell my wife that if Abhay wants an iPad, give it to him, but she strictly says ‘no’. So, I believe that a mother is the best person to look after kids and the father should support her,” he adds.

However, the actor has kept extremely busy since the last few months with Jai Lava Kusa, Bigg Boss and looking after the production (his brother Kalyan Ram is the producer of the film). “I was under high pressure — not from a career point of view, but family wise — because I missed my family and felt guilty. This is the time I should spend with Abhay. But luckily, I have a very good wife who understands and supports me,” shares Jr NTR. 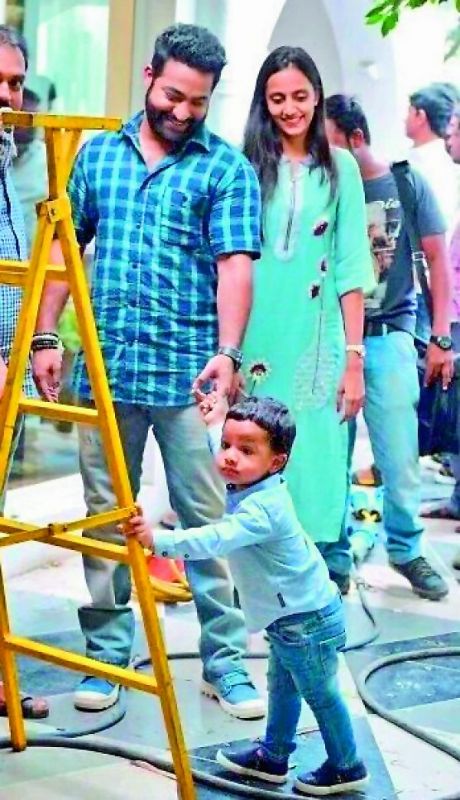 NTR and Pranathi on the film sets

Revealing that his son is very close to his grandmother, Jr NTR says, “Not me, but my mother tells him many stories.” But do his films influence Abhay? “No, never! The first thing we told each other was that I am not going to influence my son with my films. Me being an actor definitely has some influence on him, but we decided that we would never force or push him to see my films or any other film. After growing up if he wants to be an actor, that’s his choice, or if he wants to take on some other field, we will support him,” says the loving father. The actor adds that whenever the family misses each other, they make video calls.

When brothers bond
These days, Jr NTR and Kalyan Ram are often spotted together at social events. “Our bond has always existed since a long time. It is growing strong now because we have grown as individuals, our mindsets have grown and life has taken a new turn. More than that, we want to set an example for our kids, so we want to be together and strong,” says Jr NTR, who chose not to answer questions pertaining to helping Kalyan Ram financially. The actor simply said that he knew everything about his brother and that there was no need to tell everyone.

The evolutionary impression
In the last few years, Jr NTR has a more positive air around himself and even seems to have opened up in general. “Any person definitely changes at some point whether it’s because of marriage, kids or an incident. Apart from these, I stand in front of the mirror and look at myself — it feels good to see some scars on your body. I question myself ‘Are you happy with what you are now?’ although I don’t get answers for every question. I have started doing this aatma vimarsa (self criticism) and you need to be alone when you criticise yourself,” he explains.

The 34-year-old also comes across as a philosophical and spiritual person.

“I don’t believe that heaven and hell are somewhere, but here. If you are doing good things, you will be happy and see heaven. Good things help our next generation. Today I am here because of my parents and the same applies to my kids.”

Stating that he is growing old, Jr NTR concludes “I am 34 now and if you notice, you’ll see that my beard has a white hair. Every human being keeps evolving and even I don’t know what I will be like after five years. So we have to keep changing and moving on.”

We forgot to assess our interpersonal skills: Tamannaah