Mumbai: Telugu actress Sri Reddy, who is known for stripping down publicly as a protest against the biggies of Tollywood has recently expressed her happiness for getting tremendous support from fans. The actress has given sleepless night to Telugu film industry's people for sexually exploiting many struggling actresses before giving them an opportunity to make it big in the industry. 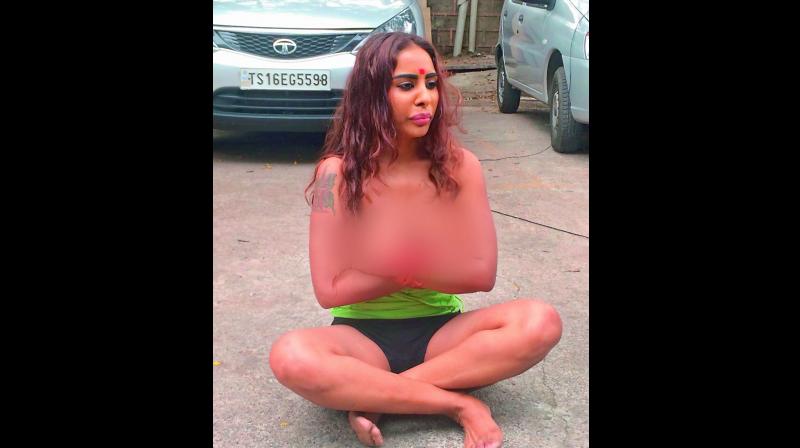 Sri Reddy during strip protest in front of the Film Chamber in Film Nagar.

Sri Reddy stated in her Facebook post, “I got a tremendous response for removing clothes.” Further, the actress thanked Telangana Chief Minister K. Chandrashekar Rao aka KCR for supporting her. In a FB post, Sri Reddy wrote, "Being a Hyderabadi Proud moment today..Thank u soooooooo much real hero kcr garu..my dream came true today..from mark of bitch now you made me a heroine to this world..1 year of my pain gave the birth..g.o passed by government against sexual harrassment..for movie industry committee is forming soon on sexual harrassment..now got tremendous result for my removing clothes..main persons who made this true is sandya ,vasudha,sajaya,tej love u all..for this movement heart is "apoorva"..thank u every one.. (sic)"

Notably, Sri Reddy had accused big names like Raghava Lawrence, Nani and Koratala Siva from the Telugu film industry for these misconduct. She had questioned the Movie Artists' Association (MAA) and the Telangana government on why there is no provision of a committee to look into cases of sexual harassment. Due to her bold step, she was banned by MAA but after a few days, they lifted it.