Prabhas in a still from 'Baahubali.'

The film, mounted on a huge scale with some brilliant action sequences and visual effects, has broken most of the box-office records in its sight.

The Telugu film, dubbed in Hindi, Malayalam and Tamil, went on to become the first film to enter the Rs 1000-crore club in India collections and collected more than Rs 1500 crores overall all over the world.

And with a film completing a week or two being considered an achievement in today's times, 'Baahubali: The Conclusion' has now gone on to complete 75 days at the box office, after hitting the theatres on April 28.

The film is still running in several theatres and adding to the moolah. 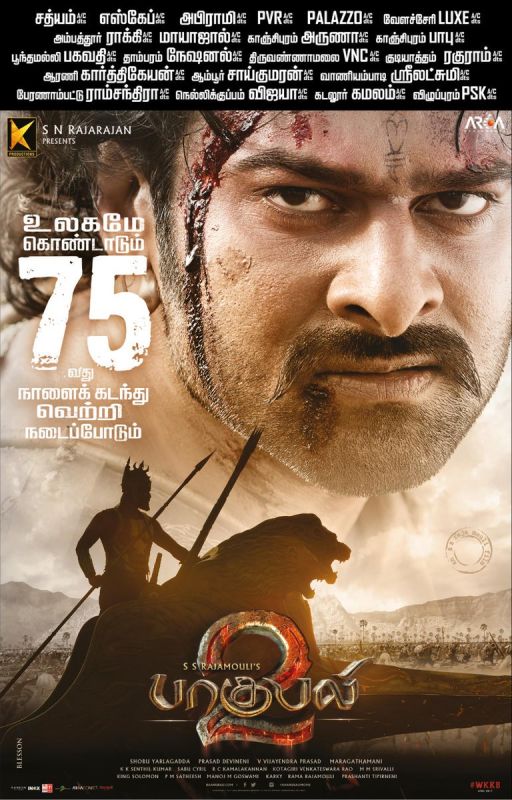 The action drama had held the record for the highest collection at the box office before Aamir Khan's 'Dangal's surpassed it with its record-breaking collections in China. However, 'Baahubali: The Conclusion' is also set to release in China soon and could go on to become the highest-grossing Indian film of all time.

■Prabhas gets nostalgic on completing two years of blockbuster Baahubali:The Beginning
■'I regret it': Rajamouli on publicly discussing ‘dropping’ Sridevi from Baahubali
■Telugu Desam: Y S Jagan Mohan Reddy is ‘corrupt’ Baahubali
■Only a fraction of the Baahubali earnings have come to me: SS Rajamouli
■Ranbir Kapoor goes gaga over 'Baahubali' star Prabhas