Mumbai: One of India’s notable entrepreneurs, Anand Mahindra, would have surely not imagined how much his ‘harmless’ and ‘witty’ reply to a tweet could go on to create headlines.

A user tweeted to Mahindra how his company’s car was trending in Telugu speaking states, courtesy Tollywood star Nandamuri Balakrishna, who lifts the SUV in a scene from his recent release ‘Jai Simha.’

@anandmahindra, Sir, this is worth to be in your collection. Pls do watch this. #Bolero is literally trending in Telugu Speaking states. pic.twitter.com/K2nyJ6SYM7

Mahindra, who is quite active on the microblogging platform considering his frequency of retweets and replies, came up with a ‘witty’ response to it, saying how the service workshops no longer needed ‘hydraulic lifts anymore to do Bolero check-ups!’.

The response didn’t go down well with the fans of the Tollywood star, who tweeted about selling shares of the company, losing respect for him, calling it a ‘publicity stunt’ and demanding a ban on the company’s vehicles, following which #BoycottMahindra also started trending.

Diverting attention to his company's 'useless service', Twitteratti asked him to improve the service centres, give speedier response to grievances and appraisals to employees instead of replying to movie trolls.

He also got slammed for ‘sharing pirated clips’ of the film when it is still running in the theatres. 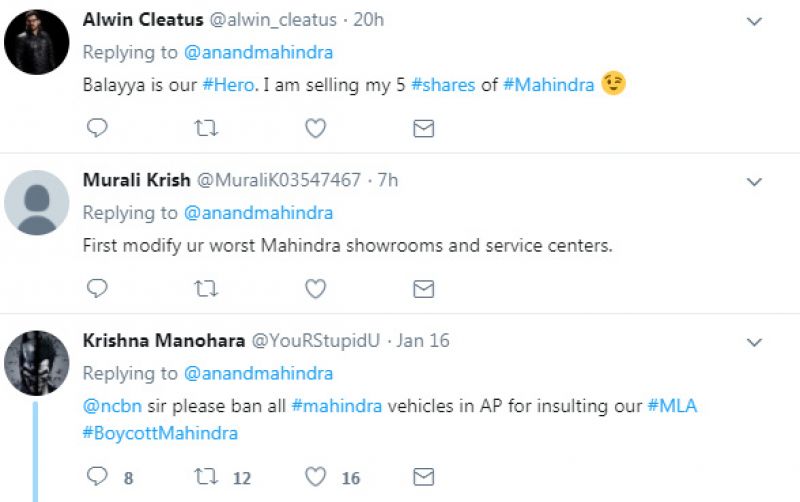 While it is common for film and sport personalities or even politicians to get trolled regularly, Mahindra proved entrepreneurs are not far behind.

‘It’s an honour to be a part of Major’