Sundeep Kishan, Nara Rohit, Sudheer Babu and Aadi on the poster of the movie Shamantakamani

An engineer with a passion to make movies, T. Sriram Adittya has done the ‘impossible’ by bringing four lead actors together for a movie, especially in an industry where actors are not very comfortable with somebody else hogging equal limelight.

His movie, Shamantakamani, stars Sudheer Babu, Sundeep Kishan, Nara Rohit and Aadi. “My first film, Bhale Manchi Roju helped me big time. As the film did really well, people believed in me and that is how I was able to put this cast together. The actors were sweet enough to agree to do it at the first go and each of them is perfectly suited for their character. Also, they were all interested to work together,” says the director, who used to make short films during his engineering days, a few of which even won awards. 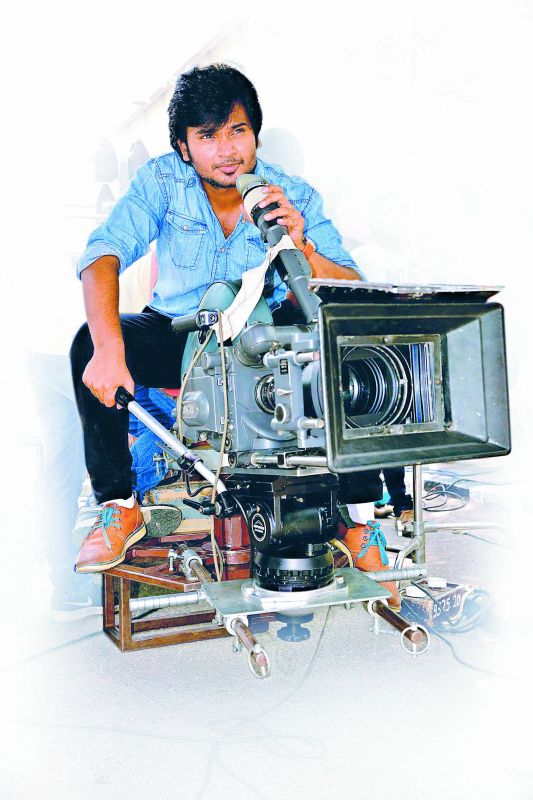 T. Sriram Adittya has done the ‘impossible’ by bringing four lead actors together for a movie

Sriram also worked with Google and Facebook before pursuing his passion for films. He had written the script for the movie back in 2013, and hence it took the young director just 37 days to finish the shooting. Sriram reveals that after Bhale Manchi Roju, he was supposed to direct Nani, but things didn’t head the right way. Undeterred, he quickly moved on to his next project. “The basic script was ready. Once we decided to work on it, it took two months to write the dialogues etc.,” he says.

“Shamantakamani is a crime-comedy, love, action, thriller — I can’t categorise the film into one genre but it will be fun to watch. While watching the movie, it will feel like you are reading a book with a lot of twists and turns. Content is going to drive this movie,” says Sriram, adding, “The credit for shooting the film in record time goes to cameraman Sameer Reddy, who is extremely fast. This is a script that has been with me for the past four years, so there was no confusion on the sets.”

Sriram also reveals that the film is based on a real life incident. “Back in 2013, somebody stole my car at a party. For almost three months, I would go to the police station to meet the cops and spend around two to three hours there. I would see a lot of cases happening in front of me. During that time, I wrote the story. This film is closely based on that but the characters are fictional,” he shares.

Although the movie stars four actresses as well, the poster doesn’t give a glimpse of any of them. “The movie stars Chandini Chowdary, Jenny Honey, Indraja garu and Kasthuri. There are no female actresses on the posters because we wanted to keep it to the four central characters. There are no heroes or heroines in the film; it’s the character that is the prime focus.”

Talking about his future plans, the director says that he has a “very interesting project coming up”, the details of which shall be soon revealed.

Simbu and Andrea unite for Siddharth

Another sci-fi movie from Vi Anand

I can do 4 films at a time: Pooja Hegde

It’s a neck-and-neck competition at BO