Anushka on love, life and Prabhas

Anushka Shetty: “To me, marriage is a very sacred space. I believe in the phenomenon of two people bonding together for the rest of their lives. I believe that relationship and marriage are spaces in which people can grow the most because if you are in a relationship you are constantly staying with that partner, and the bond evolves”

As she walks into the room where we are set for the interaction, Anushka asks her staff to open out the windows to let in a bit of fresh air. Then settling into a chair next to us, she thanks them and says, “Yeah, it’s better now.”

Fondly called “Sweety”, Anushka is a woman who walks tall among peers across 15 years of her career. Even as we wonder how we can encapsulate those years, the actress smiles, pointing out that she has had her share of struggles too, especially during her initial days.

“In fact, in 2005, while shooting my debut film, Super, I remember wanting to run away,” she chuckles. “I was naïve and clueless when I came to the industry, and it took me nearly two years to understand the industry dynamics.”

Like most people in showbiz, Anushka, too, battled negativity. However, unlike those stories, in which negativity was mostly external, in Anushka’s case, she tells us, it was what she had to combat within her. “People around me were all supportive, but I kept battling the feeling that I wasn’t up to the mark. I felt like a let-down,” she reveals.

Thankfully, instead of letting the negativity spiral, taking her down with it, Anushka chose to imbibe an attitude of learning. It is something she credits to eventually helping her make her what is she today. Incidentally, she has also made the continuous process of yoga a part of her life.

“No profession teaches you better about life than film industry does. It compels you to keep growing. Showbiz gave me opportunities to learn and evolve even in life,” adds the actress.

But is Anushka a recluse, we ask her. For instance, in an era where stars are flocking social media to share their thoughts and to influence others, constantly posting their pictures and selfies,there’s hardly any of hers, we point out to her.

“That’s because I don’t know what to post about,” she explains with a smile. “I am extremely shy and not comfortable with still cameras, which is why I don’t even give selfies. But I am very comfortable in front of a motion camera because that’s my work space.” 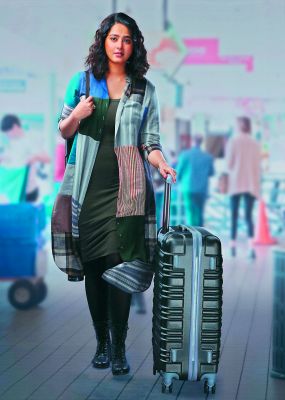 Anushka Shetty: “In 2005, while shooting my debut film, Super, I remember wanting to run away. I was naïve and clueless when I came to the industry, and it took me nearly two years to understand the industry dynamics.”

Anushka has been written about constantly — whether it is about her weight loss, or link-ups with co-stars. Talking of which, Anushka recently experienced one of her toughest phases in showbiz as she struggled with weight loss.

“I had been doing back-to-back films and was exhausted, physically and mentally, and it all took a toll on me. Then I hurt my back and was on bed for three weeks, so it took time for me recover naturally,” she explains.

But as regards the gossip written about her, Anushka seems to have taken it all in her stride. “That’s the nature of the industry, and there’s nothing I can do about it although I cannot understand why certain things are being written about me,” she says.

She confesses how the rumours, including some around her getting married, used to hurt her initially. “I would wonder if these people who wrote about me had any sisters and children,” she says adding that she doesn’t read newspapers or watch television. “I just come to know about it through some of my friends through forward message.”

Soon, she began telling herself that no one wanted to target her personally. “And I let it be. Also, because my family — who actually had wanted to get me married ever since I was 20 — knows me for who I am, even they were never affected by my marriage rumours,” she adds.

Soon our conversation veers off to the Baahubali actress’s marriage plans. What’s her take on marriage, we ask her.

“To me, marriage is a very sacred space. I believe in the phenomenon of two people bonding together for the rest of their lives. I believe that relationship and marriage are spaces in which people can grow the most because if you are in a relationship you are constantly staying with that partner, and the bond evolves.”

However, Anushka also believes people should get into marriage for the right reasons only. “Let marriage happen when you meet the right person,” she elaborates, adding that she is someone who believes that when you meet a person you love, things have to lead to marriage organically.

With all the relationship and marriage talk, we reach a point in the conversation where the Size Zero star admits that she was in a relationship. “I have had the most beautiful relationship in the past, around the year 2008, but I can’t tell you who the guy is because it’s something very personal. I would have revealed his identity had we still been together,” she says.

However, and for whatever reasons, the relationship did not go ahead. “It was a choice we made, but for me, it still remains a very respectable relationship,” she explains. “But the day I get married, it will be an open thing,” she asserts.

How about pressure from her parents, to settle down.

“The best part is that they understand me that I am a sensitive person who needs things to grow organically. I need to connect with that person,” she reiterates adding that her ideal man should also value family. “I believe family is a celebration and if he can be part of the clan, that’s so cool.”

When Anushka’s not filming, she indulges in hobbies such as photography and travelling as well as exploring everything that life throws up at her. But she has a close group of childhood (and yoga) friends who are just a phone call away. Is there someone in the film industry she bonds with similarly too, we wonder.

“Nani, Rana, Prabhas, Supriya Yarlagadda, Prasanthi, Vamsi and Pramod, (of U.V. Creations), Rajamouli family and many more,” she says, her eyes lighting up as she names them.

Anushka then comes right back to the one person she has been constantly linkedup to in the industry — Prabhas — someone she describes as her ‘dear friend’.

“I have known Prabhas for over 15 years now and he is one of my 3 AM friends. We are usually linked up because both of us are not married and make an amazing on screen pair. Had there been anything between both of us, it would have been out by this time. Both of us are the same kind of people who don’t hide any emotions if we are involved,” she states smiling at us as we come to a close of our interaction.

I couldn’t wait to kiss my new-born daughter: Hari Teja