The Dutt sisters behind Mahanati

DECCAN CHRONICLE. | SURESH KAVIRAYANI
Published May 12, 2018, 12:00 am IST
Updated May 12, 2018, 2:29 am IST
Swapna and Priyanka Dutt, daughters of producer Ashiwini Dutt, are the ones who bankrolled the film Mahanati.

Producers Swapna and Priyanka Dutt are basking in the glory of Mahanati’s success.

The entire film industry and viewers are praising the film Mahanati made on the life history of Savithri, and the two women Priyanka and Swapna Dutt, who worked hard to resurrect the life and times of the legendary actress once again. With a track record of some failed films, the two sisters had faced flak for spoiling their father and producer, and the founder of Vyjayanthi Films banner, Ashwini Dutt’s name.

Flooded with praises now, Swapna gushes “Our minds are completely blank and we don’t know what to say. We are extremely overwhelmed; there is no time to check the messages, as hundreds of them are flowing in. This is a first for both of us.” Priyanka added “We worked for nearly three years on this film and finally got the result of our hard work.”

Interestingly, neither these two girls nor the director, Nag Ashwin was born when the legendary actress Savithri passed away in 1981. “That’s true, but we were born and brought up in Vijayawada city which is a big centre for cinema. My parents and my grandfather used to watch black and white films and we would watch along with them. My mother used to tell us about Savithri garu’s life while we watched old films, so we know about her,” says Swapna. 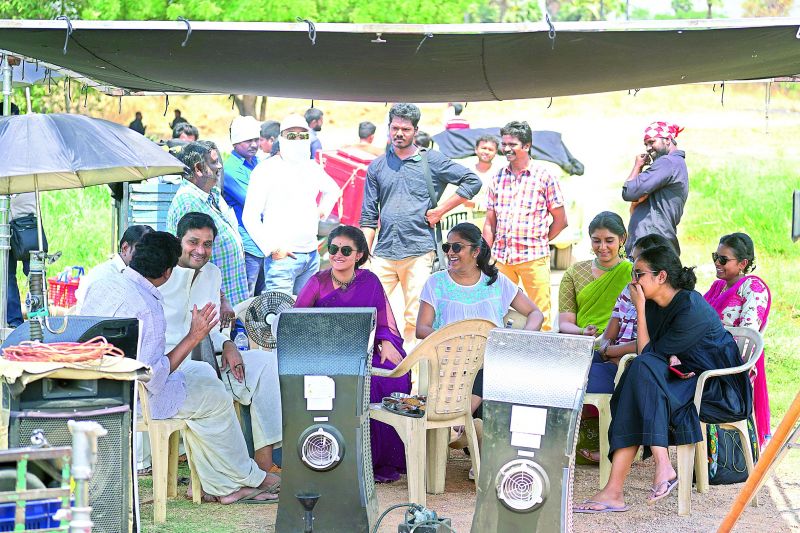 On location: the Mahanati team

After Yevade Subramanyam, they asked Nagi (Nag Ashwin) about their next project and he said that he wanted to make a film on Savithri. “The moment he said this we decided to go ahead with it and have not looked back since then,” says Priyanka. After Yevade Subramanyam, Priyanka married Nag Ashwin (the director) and they left for Europe after marriage. “At that time he prepared the story on her,” says Priyanka. The project was then whetted out after their return.

“We told our father about the project and he replied in just two words — ‘excellent idea’,” say the sisters about their father’s reaction. “Nagi started doing research and we helped him; we went through all of Savithri garu’s films,” says Swapna. “We met Vijaya Chamundeswari, Savithri’s daughter, with this idea. She was initially wary of it because she thought we were very young and wouldn’t know much about her mother. But after she saw our film Yevade Subramanyam she liked it and agreed to  support us; she shared many incidents from her mother’s life,” says Swapna.

The big task then was to get the right person for Savithri’s role. “Keerthy Suresh is not the first person we thought. We discussed few actresses, all of them established as we had decided not to go for a new face,” they revealed. “When Nagi suggested Keerthy Suresh for the role, we were unsure. But when he expressed his confidence in her and sent us the song video from her Tamil film Thodari, we were reassured. With everyone praising her performance now, we are thrilled with our choice”, they effused.

It was a hectic task as they had to identify the right places and travel to shoot the film. “We shot in Hyderabad, Bengaluru, Chennai, Mysore and Delhi too. We had to scout for places/ streets that could replicate the scenario as it existed in those days. Initially, we put up a Rs 15 crore budget for this film, but because of the settings, and places it increased,” say the sisters. “What we still can’t believe is that we made a film on Savithri garu; we believe that some super force made us complete the film,” say the sisters.

Before this film, the two sisters faced a lot of criticism for wasting their father’s money and spoiling his banner — many of their earlier projects were flops. “Yes, even we heard about it. We made mistakes and lost some money. But we were inexperienced at that time. It was a good learning for us as we tried something new with our initial films, but they didn’t work. It was a great experience for us,” they say. “But now, we are happy that everyone is praising us and we have boosted the fame of our father’s production house,” says Swapna.

Though everyone criticised them, their father was always supportive. “He never said a word and stood with us. He is our hero and cinema is his life,” say the sisters.

Did their father gave any inputs? “Yes, he would share the lives and the works of directors and producers like KV Reddy, Chakrapani and others” they said.
Their father saw the film in Vijayawada and said “I can’t believe that a Balu Mahendra, Bala Chander and Mani Rantanam are there in our house. It’s a super film and you both takeover my name too,” said the proud sisters.

I made mistakes, but that’s how I learnt: Bindu Madhavi