Superstar Rajinikanth is a feudal employer

You can be the biggest star of them all but you can still end up on the wrong side of your fans if you can’t be compassionate and empathetic. A video of superstar Rajinikanth, wife Latha and friends enjoying a private screening of his new movie, while the family’s domestic help stood watching it on her feet, throughout the screening, has left his fans irate.

The star’s family had booked Satyam theatre in Chennai to catch the evening show of the film but despite the fact that most of the seats were empty, the young girl was seen watching the movie while standing in the background.

Says a young star of Tamil cinema, “She could have sat anywhere in the theatre, a little away from family, if they did not want her near them. To make her stand and watch the film for a couple of hours was cruel. But the fact of the matter also is that domestic help in Tamil Nadu and, probably, in the rest of the country, are treated in this shoddy manner all the time. Employers believe that they have to be shown their place because, if are treated as equals, they will get swollen heads and be disrespectful. In many star homes in Chennai, Hyderabad and Mumbai, the domestic help is made to sleep on the floor, given food that is different from what the family eats and are treated like slaves. Rajini sir probably doesn’t think he’s doing anything shocking. If he had asked her to sit with them and enjoy 2.0, she would probably have fainted of shock.”

I do not know about the particular case so I won’t comment on that. However, It is vital to treat people who belong to a lower class and who are dependent on you for their survival, nicely. It’s highly important in a democracy to treat everybody equally. People try to exploit others because they have a class privilege and they think that they can get away with anything because they are able to wield a lot of economic and social power.
— Aparna Rayaprol, Professor, department of Sociology, University of Hyderabad 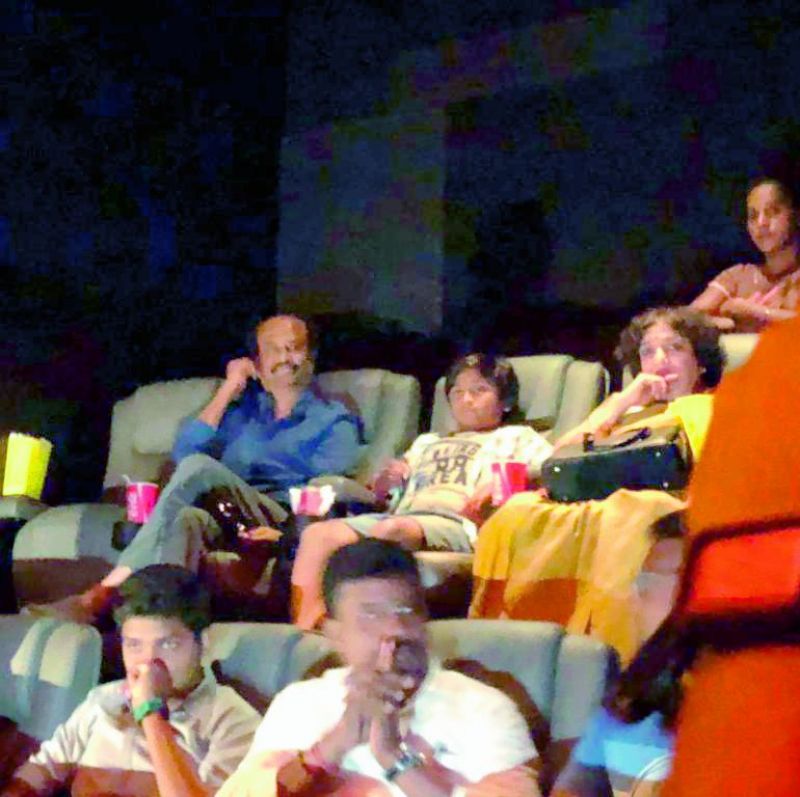 A Mumbai colleague of Rajinikanth admits there is widespread discrimination against the household staff in the film fraternity.

“It happens in every section of Indian society. It is the woman of the house who decides the treatment to be meted out to the staff. And often times this is guided by class distinction.”

Domestic workers often face abuse and exploitation from their employers especially in India where a feudal attitude towards them prevails. It’s wrong to try and explain such abuse in terms of psychiatry and human nature — it isn’t human nature but class hierarchy that’s in play here.
— Kavita Krishnan, Secretary of the All India Progressive Women’s Association

1. Some time back, the CEO of BookMyBai.com, an online platform where you can post a requirement for domestic workers for various purposes, had put out a blanket ban on providing helpers to all Bollywood celebrities.

According to a blog post on the website, out of the 10,000 homes that BookMyBai has provided its services to, the only cases of harassment or exploitation they have come across are from “Bollywood celebrities.”

The writer claimed that he provided the platform’s service to at least 20 Bollywood stars, and that he wrote the blog to warn similar start-ups.

Narrating one horrific incident, they wrote, “The helper was from Bihar and he wanted to go back to Bihar to perform the last rituals. He promised to be back after 15 days since he wanted the money to support his family. The “celebrity” called us and told us that she won’t let the person go till the time we send in a replacement. This was at 5.45 pm on a Saturday evening. Our office is shut on Sundays. We promised to send a replacement on Monday and requested her to release the helper since he has to go for his mothers last ritual. Guess what! She did not. She could not care less (sic).”

According to the blog owner, the celebrity in question wanted to hire a house help for Rs 4,000 a month, but finally agreed on Rs 10,000 after a lot of negotiations. This celebrity also made her house help clean the four-BHK six times a day.

2. Congress member Renuka Chowdhury became the subject of netizens’ wrath after a Twitter user uploaded a photo of her dining while her domestic help was standing. The tweet went viral and was retweeted 1,700 times in a single day after criticism against the former Union Minister of Women and Child Development’s insensitive behaviour started pouring in.