Gaurang Shah, who won the National Award in the Best Costume Design category for the film Mahanati, says it’s a recognition of handlooms and Jamdani weaving technique.

Mahanati has clearly a lot to brag about. It had begun its run by delighting both critics and fans equally. Then as if adding to its box office impact, the movie had a huge haul at the 66th National Film Awards. While Keerthy Suresh, the movie’s heroine, bagged the prestigious National Award in the Best Actor (Female) category, the film’s costume department, which wove the costumes for the film’s lead actors, bagged the award in the Best Costume Design category.

But interestingly, for Gaurang Shah, a Hyderabad resident and part of the award-winning team with Indirakshi Pattanaik and Archana Rao, the film was all about his love for handlooms. “When the filmmaker’s Swapna Dutt and Priyanka Dutt offered me the movie, I decided to be part of the film purely for the love of handlooms, to refashion looks for a movie icon and to see the majesty of Indian handlooms presented on a big screen,” says an overwhelmed Gaurang, who says he’d never expected to win the National Award for it.

Mahanati, which released in 2018, was based on the life of an Andhra Pradesh-born Telugu actress Savtiri, who died at the age of 45 in 1981 after having left a rich legacy of her acting. And the costumes of Mahanati, which brought back in style the ’50’s fashion, took 100 artisans and over a year to create.

Gaurang Shah, Indirakshi Pattanaik and Archana Rao were tasked with exploring and recreating textiles to weave Savitri’s journey from her childhood to her passing away. And for Gaurang, the creative satisfaction of replicating and reviving textiles from the yesteryear for Savitri has been amazing. 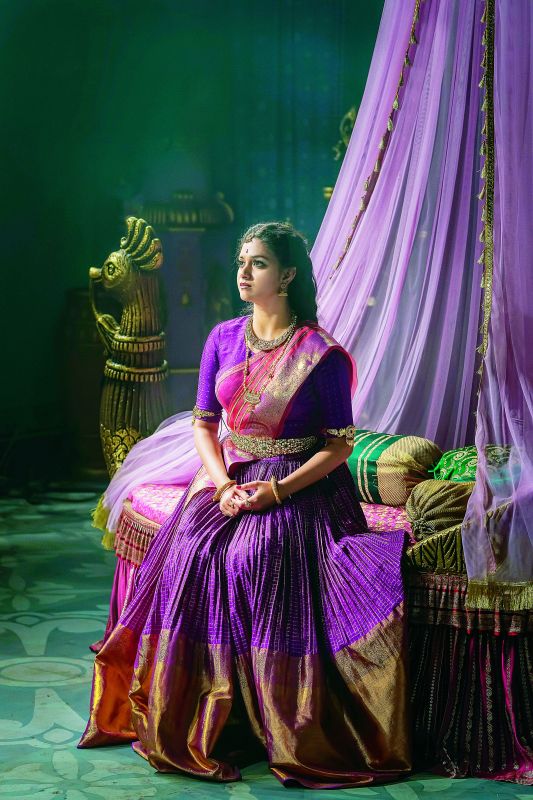 “Our job was to design the costumes for the lead actress Keerthy Suresh. I worked on the weaves and textures over a year and half year to get the looks, drapes and fall from that era. For Mahanati, we researched not only from Savitri’s old pictures, footage and archives from her descendants, but also from the fashion in that period so that we could take references and make the costumes that were relevant for Savitri. Each and every detail of the textile, design, texture and colour was studied, and artisans were guided to recreate it. While we had created a number of pieces, we zeroed in on some that matched with the mood of the film sequences to reflect the true shades of the actress as well as the storytelling,” elaborates Gaurang.

Recreating a bygone era in fabrics

Gaurang also tells us that he was also drawn to his debut movie project for the detailing of the film and the sheer passion of Nag Ashwin, the film’s director. “Nag had wanted to create costumes that added brilliance to Keerthy’s character, bringing back the fashion sensibilities of Telugu movie icon Savitri,” adds Gaurang.

The costume design team sourced heavy silks fabrics from different parts of India like Kanchipuram and Benares. They were then enhanced with block prints and fabrics such as kota and mangalgiri, which were then handcrafted into the looms by a dedicated team of more than 100 local artisans.

For the film, the team had to weave special textures to get the right fall. In fact, Gaurang and the others also motivated their present-day weavers to revisit their grandparents to understand how they could achieve the perfect detail on the weave structure. “For example, the organza fabric woven in during Savitri days draped like soft silk, which doesn’t exist in the modern era. A lot of experimentation was involved throughout the process to get the weave’s right to replicate the look,” explains Gaurang, who claims sarees to be his first love.

Mahanati gave Gaurang a huge canvas to recreate sarees from another era. “The six-yard canvas inspires me consistently. As a passionate textile and Indian jamdani designer, this costume design project was a perfect stepping stone into the movie world; it was a biopic, spanning over the years that actress Savitri’s lived. Given the movie was south-Indian its costumes had to emphasise on weaves and handlooms. Every piece we created was the recreation of timeless fashion pieces from the actress’s wardrobe. The journey was not about weaving kanjeevarams or doing prints for her younger days. It was in the nuances, such as the intensity of the zari used, the amount of zardosi, the precise planning and detailing the density of the silk woven needed. That’s what showed up as the beauty that everyone experienced on the big screen,” says Gaurang.