Rekha and I are still friends: Naresh

Naresh poses with his parents, wife and children

Naresh, who is busy with quite a few projects, says that he has rejected four offers in the last month as he doesn’t want to do whatever film comes his way.

“I am not accepting films for the sake of money, I have to satisfy the actor in myself,” says Naresh. Naresh is acting in big projects like the Mahesh Babu starrer Brahmotsavam, Trivikram Srinivas’ A.. Aa.., a Veeru Potla film and a couple of more Telugu and Tamil films. “I never look whether it’s a big or small film, I always see if it is a good and bad film. If a small producer approaches me for a good character, I am ready to reduce my remuneration,” adds Naresh.

Apart from an actor, Naresh has many other facets – a politician, social worker, farmer, a philanthropist and many more. He does organic farming at his own house. “I am doing it for the past 12 years in my house. All the vegetables in my house, including onion and green chillies, are all from one-and-a-half acre of organic farming,” says the actor.

He also owns a 20-acre farm in Shadnagar where he is growing fruits. “It’s semi-organic, I grow fruits like mango, guava, pomegranate etc.,” he says, adding that last year he and his mother Vijaya Nirmala earned nearly Rs 4 lakh from mangoes. “Most of the fruits go to the local markets,” he says.

“But in the coming 10 years I want to focus only on films as I want to satisfy myself as an actor as I am getting to play very good characters now,” he adds. He says he is enjoying his best phase as an actor, while his son Naveen is still waiting for his debut film’s release.

But why Anantapur? “15 years back, during the communal riots in Anantapur, I went underground to escape from the cops. I silently toured most of the places and I came to know that this place was the capital for our Telugu culture. I did a lot of research on the culture and decided to develop it. My mother told the villagers that  I will adopt that district, from then onwards I have put in my efforts,” says.

The actor started the concept of adopting villages eight years ago. He has also repaired nearly 160 tanks for water storage. And his building in Anantapur is now a centre for traditional cultural arts.

Talking about politics, the actor says that though he succeeded in politics, he faced a very bad phase in life. “As I told you, I always focus on one work, so I distanced from the film industry to concentrate on politics. I was successful as a politician, but at the same time I was down financially. My mother and my wife felt bad… and my mother understands me and supports me. I didn’t waste money unnecessarily, but my (first) wife Rekha left me at that point. I don’t want to go beyond that as I respect her views,” he says.

“At that time many said that I was a joker, and some even tried to distance me from my mother. Some said that I had left home and would not come back. Even my relatives said that I was a complete pauper. I didn’t get angry and took it with a smile, because I believe in destiny,” says Naresh. He says that he is still in touch with his first wife. “Yes, we are on friendly terms. Though we are separated legally, we have a cordial relationship. With the permission of my wife, I am working with my ex-wife on a children’s project on autism,” says Naresh. 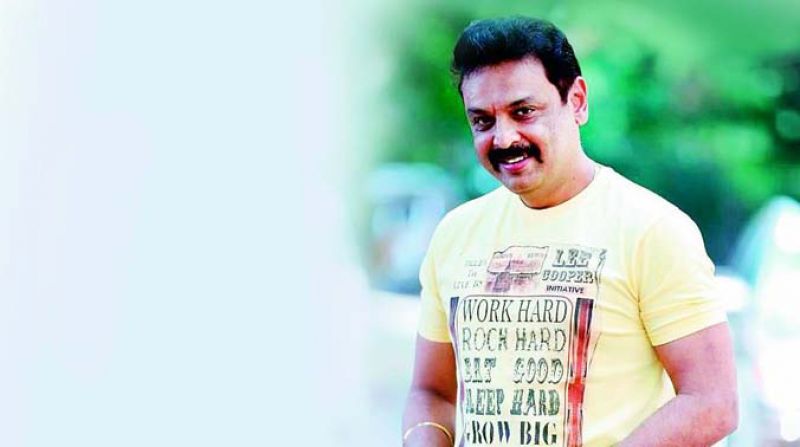 One of his close friends in the industry is Rajendra Prasad. “Many people thought that we were rivals because of the recent Movie Artiste Association elections. But we are good friends. Director Praveen Sattaru is also close,” he says.

Is it true that Naresh is a wealthy person now? “Yes, by god’s grace I can say I am a millionaire. We are into construction business. My mother is a good planner and I am a bad businessman. But I am a creative person,” he says. Not many know that Naresh is also fond of car racing. “I won a cup in car racing at the age of 17 in Chennai,” he says. He buys the latest cars and also owns a sports car.