Drama diaries: A scene from the play

Kanjoos or makhi choos; you choose. This is the choice that the French playwright Moliere gave his audience with his character The Miser. Four centuries later, Sutradhar decided to take up this question and brought it to the audience on the occasion of World Theatre Day, 2017.

Adapted from the play The Miser, Kanjoos Makhi Choos is one of those rare Sutradhar productions when the director, Vinay Varma, plays an outright slapstick character of Mirza himself. This was the first of the three shows of the play which opened to a more than packed house. The spillover audiences grabbed whichever piece of real estate of Lamakaan they could with a line of sight to the stage.

Mirza, the lead of the story, is a wealthy man but instead of enjoying his money by spending it, he enjoys by hoarding it. His children Farooq and Azra, played by Rahim and Sharanjeet, have almost given up on ever seeing their dad’s amassed wealth. All they want in life is to get married to their chosen partners. But for Mirza everything has to have a monetary angle which obviously comes in the way. What follows is a barrage of characters, each with their own agendas and a whole lot of confusion. It all culminates into a bizarre twist at the end, which leaves the audience in splits.

The play is adapted into Hyderabadi Lingo which gave it that extra zing. It not only makes it relatable but also that much more funny. The Bollywood and television references, the absurdity of a few characters and most of all the loudness of the underlying plot of who wants to marry whom, set off the audience on a hilarious 90 minutes’ journey. 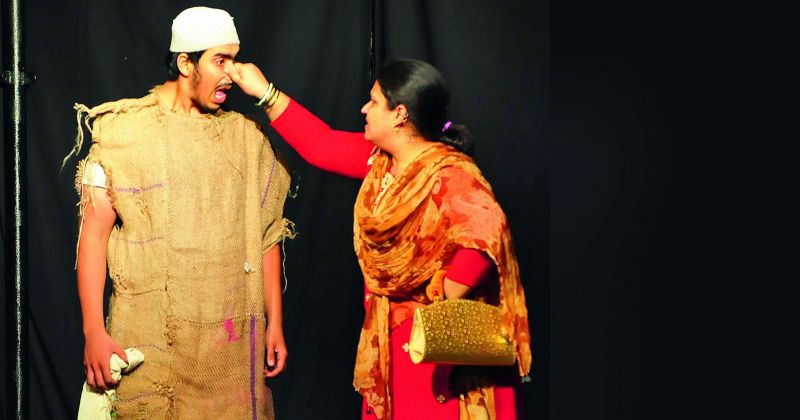 The director went for an over the top approach with the acting which worked for the most part; but towards the end there was a bit of comedy fatigue. A bit of variation in the middle somewhere might have actually prevented that. According to Grace in the audience, “It was funny, but what I liked most about it was that it brought out the misogyny that exists in our society and its utter ridiculousness.”

The backstage crew for this production was a huge crowd which had to be crammed in a space which was clearly not enough for them; but then again, it was a Sutradhar production. The crew did a wonderful job of having the production go as smoothly as it could, which is not always possible with such a huge audience.