For peace and prosperity

The day has come when Prakash Bare is available on his local number. He has, after years — a decade and more — moved back to India. The US still has the market and the customers of the IT firm he had started ten years ago. But with all the theatre and film work that Prakash is involved in, he has quite a lot of running around to do in India. As we speak, he is in Kerala to finish the last patches of an English film called Painting Life, shot mostly in Sikkim. Prakash plays the male lead and is also producing the film by his longtime friend Dr Biju. There are two other films nearing completion, and a play he does the title for — Deepan Sivaraman’s second after Khasakkinte Ithihasam, The Cabinet of Dr. Caligari.

That all three films do not belong to mainstream cinema is no coincidence. “It is a totally different kind of ball game in Malayalam cinema today. Content driven movies like in the 80s are very difficult to make. That’s why when you see the success of a movie like Mayaanadhi, you are happy. I try to stay away from a situation where I have to bow down to a particular hierarchy. Unless there is mutual respect, like in the case of working for director Sathyan Anthikad. He is one of the last directors left out in this time when everything is revolving around star hierarchy. Whether it is directors, producers, other actors — they are all secondary. All of them will be shed to suit the convenience of the stars,” Prakash says.

The team went for an English film with Painting Life because Prakash says Malayalam has become a mostly monopolistic film industry. “In any other industry, even if there are stars, there are spaces in between for a movie like Paruthiveeran. Here it is a monopolistic AMMA-controlled industry, where they decide what to see, what to make and what to like. English will also ensure a pan-Indian audience.”

Painting Life deals with a film crew going to Sikkim to shoot but they get stranded there because of a natural calamity. “They are cut off from the busy life they are used to and forced to look at the nature, the people and their issues. I play the filmmaker who is going through a transformation,” Prakash says. Geetanjali Thapa plays another important role that becomes the catalyst for the filmmaker’s change. There are actors from ten states and the music comes from Singaporean composer Mark Chan. The film would go through festivals before getting a release.

The other film Prakash is producing is a small budget one shot in Kasaragod — Theerumanangalum Saadyathakalum. “It is about a man — an IB official — caught between two kinds of death. On one side he is fighting for euthanasia for his daughter who is in a coma. On the other side, at his work, an innocent man is being persecuted. At one place death is denied and at the other, it is forced.” Prakash plays Ayyappan, Sujith Shankar is Yusuf and Anumol is Geethu. It is directed by Suresh Peter. 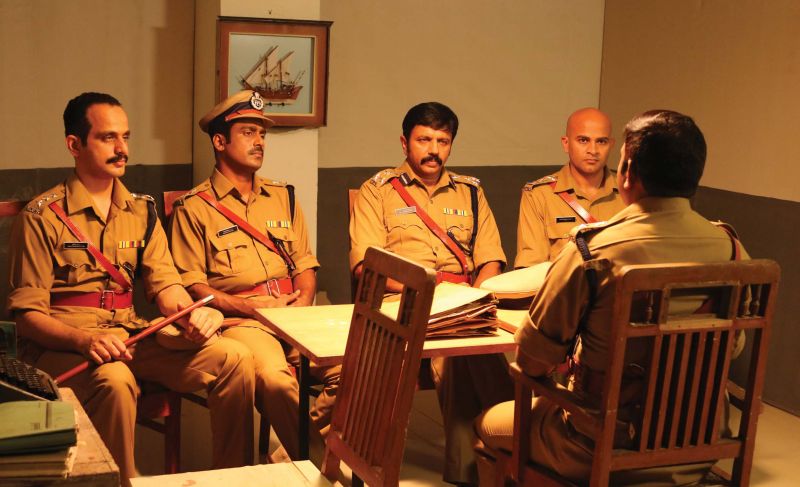 The third film — Kaattu Vithachavar — is produced by a film institute in Kozhikode. “It started as a diploma film. I had at the time been thinking about working on a film based on the Rajan case. That’s when they approached me. In the film there is a police team deployed by the Antony government to find out what happened to Rajan during the Emergency (of 1975-77). I play the police team head — a good cop. The film is directed by Satheesh Paul from the film institute,” Prakash says.

He is happy with all the three roles. “Not many interesting, real life-inspired characters come to one. This year, I got the three most diverse characters. On top of that I got Dr Caligari,” Prakash says of his new play, based on a 98-year-old film by the same name. It is relevant even today, for it is about how fascism can take over human minds. “It happens in every democracy — whether you look at Brexit or the US or the situation in India now. We wanted to react to it.” They had staged it in Thrissur last year and will have shows in Bengaluru, Kochi, Mumbai, and also plan to take it outside the country. “Even though theatre is difficult in Kerala, monetarily it is doing better in the rest of the world. But the risk is still not as high as it is in cinema. Because you don’t face the kind of censorship you do in cinema. You have more freedom and you get a platform where you can courageously talk of politics.”

Prakash had been into theatre since his student days at the Palakkad Engineering College. He says there is an active community passionate about theatre among the alumni. Some of them perform in his movies too. Prakash also has a banner called Blue Ocean Theatre in Bengaluru. His second child — Shruthi — has followed in her dad’s footsteps, loving dance and music and theatre. She has recently composed and released a song Not the End as part of an independent album ‘Genesis’, made by six school students including herself. “She is also doing a role in the film  Theerumanangalum Saadyathakalum. She wants to be a biotechnologist and minor in theatre,” Prakash says. His elder one Shalini is following another path Prakash has trodden on — doing her engineering in the US.

Overall, the year 2017 had ended on a positive note, Prakash feels. “Everyone suffers in the industry but it is the women that suffer the most — remuneration wise or stardom wise. The presence of women in several areas is very small — a Malayali woman director is a rare species. And now they have decided to react. That is positive. Another positive trend is the success of content driven films. On that note, the year 2018 also looks promising,” he says.

A lyrical dance-drama laced with romance